Ladies and Gentlemen, Gvirotai V’rabotai, for the first time in its 242 year history, the United States of America is proud and grateful to receive happy birthday wishes from its Embassy in Jerusalem, the capital of the State of Israel!

What a difference a year makes! Last year we celebrated at the Ambassador’s residence in 90 degree heat (Farenheit), tonight it is a pleasant air-conditioned 70 degrees. Last year guests parked their cars in a remote location and were bussed to the residence, only to wait on line for an hour just to shake our hands – definitely not worth it. Tonight, you park your car nearby, enter the hall and you are immediately inside the party. I think this is a much better idea. Our sponsors and staff have worked hard to create the biggest and best 4th of July Party in the history of Israel, and next year I’m sure it will be even bigger and better. America and Israel are on the rise!

I want to thank all of you for being here tonight as we celebrate America’s 242nd birthday. First, I’d like to thank my wife Tammy who has been a full partner in all my efforts here in Israel and everywhere else. My sincere thanks as well to President Reuven Rivlin who was kind enough to visit us earlier this evening. President Rivlin was unable to remain with us for the entire event, but I very much appreciate his stopping by.

I would also like to thank Prime Minister and Sara Netanyahu for joining us this evening. You bring great honor to our celebration as you have in years past.

My thanks and appreciation for all the Chavrei Knesset, officials of the Israeli government and business and religious leaders who are here tonight. We have a truly outstanding gathering of the very best of Israeli public and civil society.

I’d like to extend a special welcome to four members of the United States Congress who are with us tonight:Congressman Ted Deutch who is here with his wife Jill
Congressman Albio Sires
Congressman George Holding, and
Congresswoman Jennifer Gonzalez.
Thank you for coming and for showing your bipartisan support for Israel.

I’d also like to welcome another special guest, Stuart Force, the father of Taylor Force, may he rest in peace, one of our nation’s best and brightest. About 2 years ago, Taylor, a West Point graduate, was murdered by a terrorist from the West Bank City of Qalqilya. The Force family was devastated by the senseless loss of their brilliant son. But when they discovered that American financial aid to the Palestinian Authority was being used to reward the family of their son’s murderer, their sadness turned to justifiable anger. That anger was channeled into a political movement which led to the passage of the Taylor Force Act, signed into law by President Trump on March 23, 2018, which ensures that this travesty of “pay to slay” will never be repeated by the United States. Welcome Stuart Force!

‎This evening wouldn’t be possible without the extremely generous support of our sponsors, especially our premier sponsors – ORACLE, KETER, MCDONALDS, BLUE MOON, CASE, COLGATE and JIM BEAM.  You’ll see the names and logos of our sponsors around the hall and on the outside patio, and many of their representatives are here as well.  I encourage you to seek them out and chat with them.  They all have a presence here in Israel and represent the best of US -Israel economic cooperation. The work these companies are doing creates jobs in Israel and the United States, and ensures the best products and technology are available to consumers in both our countries.

Finally, my thanks to the entire team at Embassy Jerusalem for pulling off this amazing event – just six weeks after orchestrating a flawless dedication ceremony for the Jerusalem Embassy. You are all incredible.

I never take for granted nor cease thanking God for the extraordinary privilege of representing President Trump and the United States of America in this miraculous country. And I want to thank all of you here in Israel who have received me, Tammy and our family with such warmth and love. The feeling, I assure you, is mutual.

It was a time of great and unprecedented gestures in favor of Israel, which in turn led to great anticipation for the future. But would these hopes and aspirations be actualized? Would there be concrete, tangible advances in the US-Israel relationship?

It is now a year later and I hope you all agree with me that the answer is a resounding YES! As I said, what a difference a year makes!

For years we lacked a cogent plan to pressure Iran to end all of its malign activity – today there is such a plan and we see it is starting to bear fruit.

For decades, there was no pathway to bringing an end to the nuclear capabilities of North Korea – today such discussions are under way; and

For millennia – millennia – there seemed to be no means by which the most powerful nation on earth, whatever nation that may have been throughout history, would recognize Jerusalem as the capital of the Jewish State – today I go to work at the United States Embassy in Jerusalem, Israel.

President Trump has assembled an extraordinary team committed to standing with Israel and for Israel:

This incredible team, and so many other American patriots, have demonstrated by word, and more importantly by deed, the commitment of the United States to its rock solid friendship and alliance with the State of Israel.

We are all led by a President who guides us on this righteous  course and who has stood, and who will continue to stand, with Israel courageously and with unwavering fortitude, PRESIDENT DONALD J. TRUMP!

My friends, there remain challenges ahead for the State of Israel and for the United States as well. Together we will meet those challenges, together we will prevail against our enemies and together we will make the world a better, more prosperous and more peaceful place. We will do so because our cause is just and because, as King David said some 3000 years ago, Hinei Lo Yanum V’lo Yishan Shomer Yisrael == the Protector of Israel neither slumbers nor sleeps.

Before I intoduce Prime Minister Netanyahu, I want to remind everyone here of a day 42 years ago == our 200th birthday, our bicentennial – July 4, 1976. It was a glorious day of tall ships and fireworks in New York Harbour and throughout America. It was also the day of Mivtza Yonatan, Operation Entebbe, perhaps the most daring, improbable and successful commando rescue operation in history. On that day, Yonatan Netanyahu, the brother of the Prime Minister, lost his life in the course of saving 102 lives held hostage by terrorists some 2500 miles away from home. July 4th is our national birthday. Here in Israel, it is that and something more – a day on which the State of Israel demonstrated to the entire world that it will risk everything and go anywhere to save lives. That act of heroism, coupled with so many other selfless acts of America’s and Israel’s bravest, is the lynchpin of the great mutual admiration and respect that our two nations have for each other.

It is now my high honor and privilege to introduce the Prime Minister of Israel, Benjamin Netanyahu. May God bless you, may God bless Israel and may God bless the United States of America. 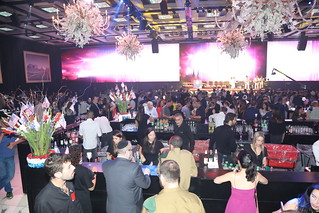