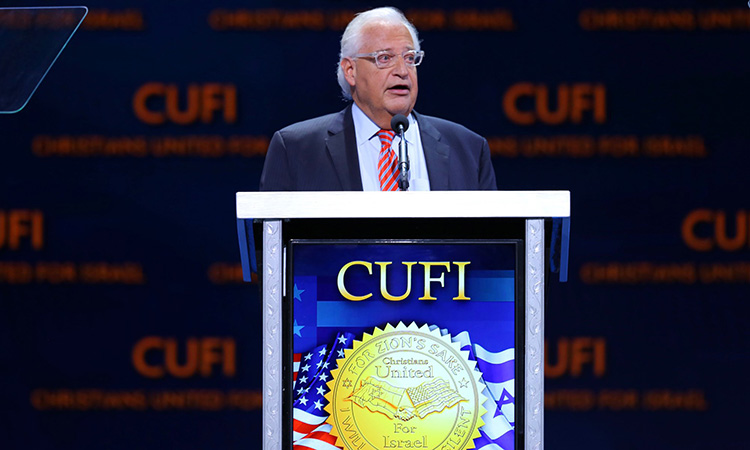 Tammy and I are so excited this evening to celebrate with such great people like yourselves the State of Israel and its incredible and unbreakable relationship with the United States. I want to thank each and every one of you for helping to make the Holy Land safer, more secure and more prosperous through your support, your visits and, most important, your prayers. Thank you.

I’d like to begin by sharing with you a story about something I did last week, but first a word about a broken pipe.

Some 15 years ago a sewage pipe burst in a community called Silwan, located just outside the walls of the Old City of Jerusalem. The municipal plumbers rushed to the scene and began to excavate the location to fix the pipe. But what they saw as they began to dig made them realize that this was anything but an ordinary job. They called in the Jerusalem Bureau of Antiquities which in turn brought in leading archaeologists. This all led to one of the most significant discoveries of the last 100 years.

The discovery is referred to as the Pilgrimage Road. It is actually more than just a road. In the first instance it is the discovery of the Pool of Siloam, built initially in 700 BC by King Hezekiah, and then rebuilt during the Herodian period of the first century. The pool, massive in size, is where pilgrims, traveling to Jerusalem from around Israel and even further distances to celebrate the three major Jewish festivals – Passover, Shavuot and Sukkot – would come to purify themselves before ascending to the temple.

Now, once the pool was found in the valley adjacent to the temple, the next step was to see if there was a passageway between the two. And then came discovery number 2 – a road of some 2000 feet, mostly intact with the same flagstones as those adjacent to the temple entrance. This was the path – taken by all pilgrims including Jesus as he ascended to the temple on his well- documented visits – that became known as the Pilgrimage Road.

And that story of a burst pipe and its aftermath takes us to last week. When I had the honor and privilege to break a ceremonial wall to inaugurate the opening of the first half of the Pilgrimage Road and then to walk the entire distance.

How incredible to be involved, even ceremonially, in this once in a century discovery.  To immerse oneself in the ancient history of the Jewish people; to stand on the footsteps of the beginning of Christianity. Not just to see in a museum a shard of glass, an ancient coin or a piece of parchment. But to stand at the crossroads of history itself!

Who could find fault with such a glorious moment? Well the NY Times, the Washington Post and the Palestinian Authority of course. With a level of vitriol that frankly I haven’t seen in more than two years at my post. The PA spokesman literally called this discovery a fake and a hoax, of course with no proof to back up this malicious lie. I saw in those reactions a resistance, an antagonism and a fear of history that told me a lot about why peace is so elusive in this region.

Imagine if the United States was negotiating with one of its adversaries and, after reaching agreement on all issues we received one last demand: to rip up the Declaration of Independence stored in our national archives. What’s the big deal, they would say — it’s just a relic, a piece of parchment without legal effect. After all, our governing laws are in the Constitution, not the Declaration of Independence.

Could you imagine our response? We’d leave the table so fast the room would be spinning.

But that’s what the Palestinians and the left wing media ask of Israel — to give up its history. To walk away from its 3500 year connection with Moses, with the Prophets, with King David and King Solomon and others. Their wish is for Israel to deny its past and to destroy its national DNA.

Let me inject a brief word here about national security. No quantity of bombs or fighter jets or troops really guarantees security. What makes a people safe is when they stand together for something — when they collectively share values, beliefs, goals and a shared history. And that’s what the Palestinian Authority is trying to deny Israel when it objects so angrily to the Pilgrimage Road. Because if Israel, God Forbid, loses its history, it stands for nothing and it is no longer safe.

In American we need to understand this as well. Four days ago we celebrated the 243rd anniversary of the signing of the Declaration of Independence. That brilliant document fundamentally changed the way in which we think about the relationship between a government and its citizens.

The Declaration of Independence provided that every human being was created equal and endowed by their creator with certain unalienable rights, including life, liberty and the pursuit of happiness.

The notion that essential human rights came from God and not man was a revolutionary concept. It made those rights permanent, undeniable and immune from the vagaries of politics.

How did our founding fathers know which rights God considered unalienable? Remember, the Declaration of Independence doesn’t just say these rights are important – it says these rights are given to us – not by Republicans or Democrats – but by God himself.

Well I’m sure many of our founding fathers read John Locke and Thomas Hobbs and other great thinkers. But I’m even more certain that they read the Bible. Especially because all of the unalienable rights identified in the Declaration of Independence find their home in the Bible itself.

Life, Liberty and the Pursuit of Happiness. OK, let’s start with life. In Deuteronomy Chapter 30, v.19 God states “I have set before you the blessing and the curse and you shall choose life — ‘uvacharta bachayim’ — so that you and your progeny may live.”

How about liberty ……In Leviticus Chapter 25, v.10.  God commands “and you shall proclaim liberty throughout the land to all its inhabitants” — words that adorn the Liberty Bell in Philadelphia.

And Happiness – so many references, perhaps this one is representative …..Jeremiah Chapter 31, v.7: “For thus saith the Lord, sing with happiness for Jacob and shout among the nations, Lord save thy people the remnant of Israel.”

It’s all there in the Bible, undoubtedly the strongest single influence on the drafters of the Declaration of Independence.

Many believe – and certainly our founding fathers believed – that the word of our creator is expressed in the Bible, and, as recognized by the prophet Isaiah, that word emerged from the city of Jerusalem. As Isaiah said in Ch 2, v3, “out of Zion shall go forth the law and the word of the Lord from Jerusalem.” Ki metzion tetze Torah u’dvar Hashem m’yerushalayim.

To understand this connection between the birth of our nation and the City of Jerusalem is to understand all that has transpired since, between Israel and the United States.

It is to understand why the Pilgrims risked their lives in the 17th century to reach a new world and establish what many of them referred to as a “new Jerusalem.”

It is to understand why the United States opened a consulate in Jerusalem in 1844, 104 years before the State of Israel came into existence, at which time the new consul general planted an American flag at the Jaffa Gate and declared that the United States of America thereby “extended its protection to the Jews of Jerusalem.”

It is to understand why Mark Twain and Ulysses Grant visited Jerusalem and President Lincoln told his wife Mary, upon the conclusion of the Civil War, that he’d like to take some time off and travel to Jerusalem.

It is to understand why President Harry Truman caused the United States to be the first nation to recognize the reborn State of Israel in 1948.

It is to understand why in 1995 the United States Senate, and the United States House of Representatives, by overwhelming majorities, passed the Jerusalem Embassy Act recognizing Jerusalem as the capital of Israel and mandating the transfer of our embassy to that city.

It is to understand why just two years ago, in 2017, the United States Senate, by a vote of 90-0, reaffirmed its commitment to the Jerusalem Embassy Act.

It is to understand why Willam Seward, President Lincoln’s secretary of state wrote of his visit to the Holy Land: “Our last day in Jerusalem has been spent, as it ought to have been, among and with the Jews, who were the builders and founders of the city, and who cling the closer to it for its disasters and desolation.”

It is to understand why, about 150 years after Secretary of State Seward made his statement from Jerusalem, our incredible Secretary of State Mike Pompeo, just hours ago, stood before all of you and quoted the famous words of our second president John Adams: “I really wish the Jews again in Judea an independent nation.”

It is to understand why President Donald Trump, like none of his predecessors, had the courage and spirit to declare on December 6, 2017 that Jerusalem is the capital of Israel.

And it is to understand why, today, the United States Embassy proudly stands in the City of Jerusalem.

America’s physical beginnings may be traced back to Plymouth Rock, Valley Forge, the Continental Congress, the Constitutional Convention, the 4th of July or other important points of historical reference.

But America’s spiritual beginning, its bedrock foundational principles, its understanding of the God-given rights of every human being — that beginning occurred with, in the words of Isaiah, “the word of the Lord emerging from Jerusalem.”

It is undoubtedly in America’s best interests to support Israel. America is at its best when it supports Israel – it is a value deeply engrained in our national DNA and it is one that I believe has brought us blessing and bounty from the Lord.

Those of you who may have attended a Passover seder may be familiar with the the famous song “Dayenu” — the word means “it would have been enough.”

With your permission, a new paraphrased Dayenu for the Trump administration.

We got some criticism because the United States didn’t horse trade with Israel for these acts of support; it didn’t demand any concessions in return.

But isn’t that whole point? The Trump Administration did what was right simply because it was right. You’ve heard the cynical phrase from time to time that “might makes right.” Well this is  exactly the opposite. The Trump Administration’s support of Israel is a case of “right makes might.” The United States is more powerful and more secure in the world, and I believe it will be blessed, because it acted in support of Israel on the side of right.

Although we say Dayenu — it would have been enough — just like in the Passover Seder, it’s never enough.

Israel’s enemies do not rest and so neither can we. Israel’s enemies are always seeking new ways to destroy, discredit and demoralize the Jewish State and so we must always be smarter, stronger, more energetic and more committed in our defense of Israel. With God’s help, I know we will succeed. As Pastor Hagee proudly declared on May 14, 2018  in his benediction to close the ceremony inaugurating our new embassy in Jerusalem: “the protector of Israel neither slumbers nor sleeps.”