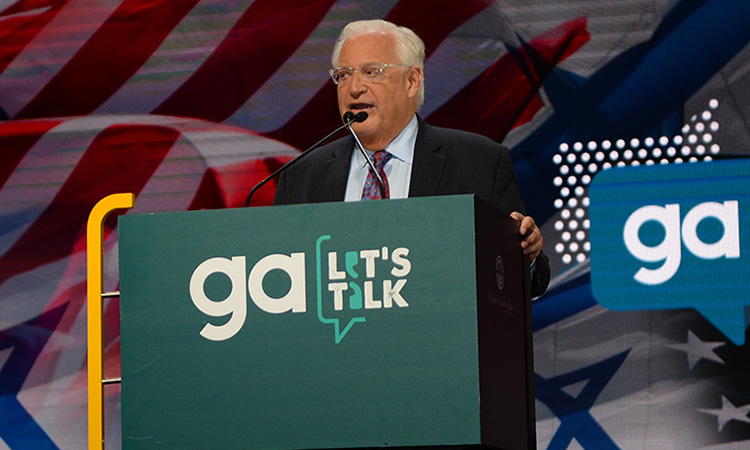 Canadian Ambassador to Israel, Deborah Lyons, Chair of the JFNA Board of Trustees, my friend Richard Sandler, incoming Chair Mr. Mark Wilf, co-chairs of the GA Danna Azrieli and Marius Nacht, CEO of the JFNA, my friend and fellow rabbi’s son, Jerry Silverman, my wife, Tammy just returning from the birthday party of our eldest granddaughter in NY, fellow supporters of Israel, friends and distinguished guests,

Welcome to Israel and thank you for having me.

The theme of this conference, as I understand it, is “Let’s talk.” It’s a great theme. And while you don’t say “about what,” I will presume the primary subject is Israel/Diaspora relations. It’s a great topic. There are few things I care about more or that I want to talk about more. So if this is the dialogue you are seeking to encourage, you’ve got the right guy. Unfortunately, for the next 10 minutes this will be more an exercise in “Let me talk” rather than “Let’s talk.” But rest assured this is a conversation I wish to continue with all of you, and to listen as much as I talk.

Many don’t want to ask the question so bluntly, but I believe in brutal honesty – some people say this makes me undiplomatic, some say it makes me a good diplomat. But I do believe in confronting issues and addressing them head on.

Are Israel and Diaspora Jewry drifting apart? And, if so, what can be done to change the trajectory?

Before addressing the question, I think we need to start with a more basic point. To make it, I will borrow from a parable in the Passover Haggada. We are all familiar with the reference to the four sons – one wise, one wicked, one simple and one who knows not even how to ask a question. Let’s assume we all fall into the first category, the wise son. My goal is not to classify the Jewish community but rather to make a more fundamental point – the Haggada prioritizes qualitatively the four types of Jews, and the last is not the wicked! The last son, most deserving of criticism, is the apathetic. Apathy is the lowest rung of Jewish observance – two levels below even the wicked.

It’s an important lesson for all of us. Apathy is our enemy, not disagreement. I will bet that there are people in this room who disagree with me on Israel policy – I am an unapologetic hard right defender of Israel and a security hawk. That’s who I am. And to those of you who think differently, my response is not “you’re wrong” or “who cares?” My response I value your thinking, I respect your views and, most importantly, I’m grateful that you care. Now let’s have a conversation.

Everyone in this room is part of the solution. As Woody Allen said, 80% of life is just showing up. By being here, you are showing how much you care and voting with your feet against apathy. And I thank you for that.

Where apathy is growing in the diaspora, we have a problem. It’s a problem of outreach and education. It requires a concerted and multi-layered effort to inculcate unaffiliated Jews with the wonders of Judaism and the State of Israel. Programs are out there to address apathy and they need to be supported.

Where disagreements are growing, however, we have a different problem, but it is one which, in my humble view, is easier to solve. Because we’re dealing with people who already care. Disagreements we need to discuss. With respect. And with love for each other. Not just pretending to care, or being polite, but actually listening.

But we can never drop the ball on combating apathy just because we have unresolved disagreements – they are related but nonetheless discrete issues. While a husband and wife are arguing, they still need to support their children.

Let me speak for a minute about the disagreements that pop up from time to time between Israel and Diaspora Jewry. They will never go away completely. They just won’t.  To paraphrase the famous observation, Israel is from Mars and the Diaspora is from Venus. But as they sometimes say about the original subject of that observation, “Viva la Difference.”

Here are the most obvious examples of how Israel and the Diaspora Jewry are different in profound ways.

Now these are points that perhaps suggest that the Jewish Diaspora needs to be more understanding of Israel – and there’s some truth to that. But the converse also is true – Israel needs to do more for the Diaspora. Israel is now the big brother in the Jewish world.  First world economy and quality of life, world leader in cyber, biotech, and artificial intelligence.  As the world’s largest Jewish community it can and must do more to connect to the Diaspora.  Unlike Israel, Diaspora Jewry isn’t reaffirming its Judaism every day by living in a Jewish State, most are not immersed in Jewish study, kids are not singing Hatikva every day – in the Diaspora you can’t reaffirm your Jewishness just by showing up! The Diaspora needs Israel to help World Jewry maintain its connectivity to Judaism and Israel needs to accept, embrace and discharge that responsibility as a national imperative even though those efforts extend well beyond its borders.

In the end, there is far more that unites us than divides us, and it is the unifying facts which we must always emphasize:

We all know these facts to be true. That’s why we are here. That’s why there is a critical role for every one of us to play in the ongoing miraculous story of Jewish history. And that’s why we will continue to be here and do all we can to strengthen the bonds between the country of our citizenship and this small nation of Israel that we value so much.

May the Lord bless you from Zion and may you see the good in Jerusalem.

An odd phrase – not “may Jerusalem be safe, or prosperous or blessed” but MAY YOU SEE IT – see the good? What was the Psalmist saying? He was making a profound point — Just because something is there, is true, is beautiful, doesn’t mean you will see it.

Seeing may be believing, but seeing is not just biological. Tests show that we have much control over what we see. Best example is an eye chart – start with big letters on top and we are conditioned to expect lower visibility as we track downwards. Turn it upside down and remove that expectation, and many reveal better vision of smaller letters.

What we see is thus in part how we condition ourselves and our thoughts. That was the message of King David.

May all of us condition ourselves to see more, to see more clearly, to open our eyes, our hearts and our minds to appreciate and understand the heartfelt and sincere beliefs of all who care about the world Jewish community and the state of Israel.

And may this lead to all of us fulfilling the blessing of King David—Ureeh B’tuv Yerushalayim – may we all literally and figuratively see the good in Jerusalem.