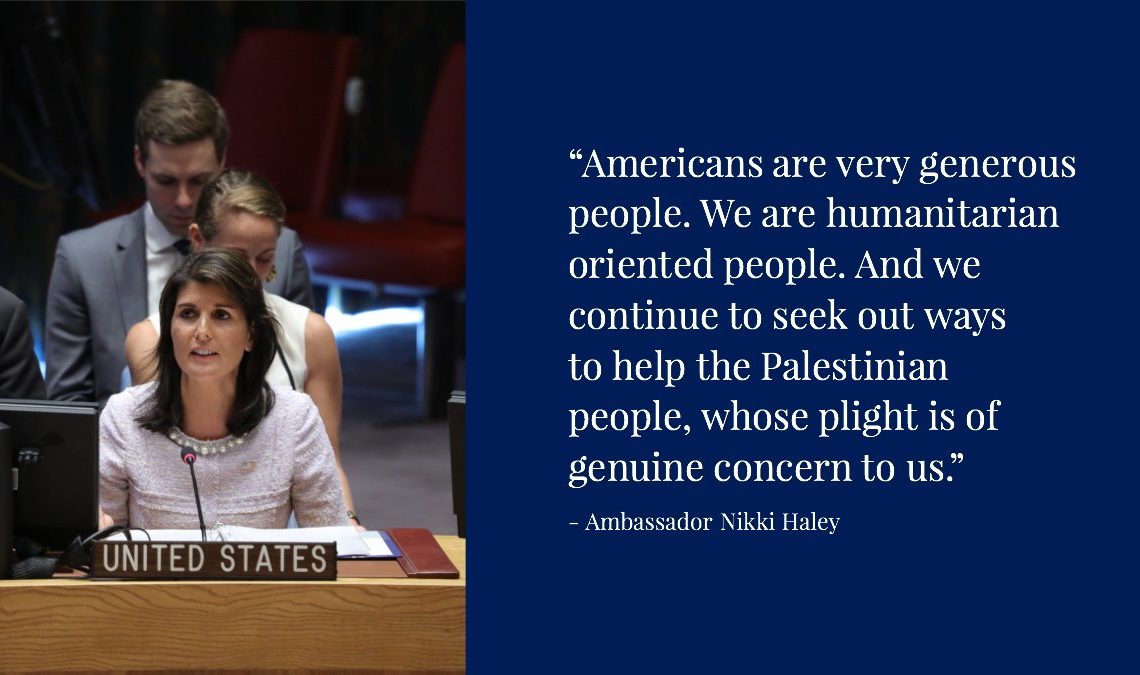 Before I go to the main point of my remarks, I do want to emphasize one item that Mr. Mladenov touched on. In the last three months, the terrorist flaming swastika kites that have crossed over from Gaza into Israel have damaged or destroyed 7,500 acres of land.

Now Israel is a small country. The equivalent proportion of land in the United States would be the size of the entire state of Connecticut. In France, the equivalent would be 10 times the entire land area of the city of Paris.

This is no small thing. If it was happening to any of our countries there would be quite a lot of discussion on it.

While the international media pays very careful attention to every step Israel takes in self-defense, we must not lose sight of the very real damage that is being done to Israel from terrorist attacks coming from Gaza.

Now the main purpose of my remarks today is to shed light on another important and frequently overlooked item when it comes to the Palestinian community.

Here at the UN, thousands of miles away from Palestinians who do have real needs, there is no end to the speeches on their behalf. Country after country claims solidarity with the Palestinian people. If those words were useful in the schools, the hospitals, and the streets of their communities, the Palestinian people would not be facing the desperate conditions we are discussing here today. Talk is cheap.

No group of countries is more generous with their words than the Palestinians’ Arab neighbors, and other OIC member states. But all of the words spoken here in New York do not feed, clothe, or educate a single Palestinian child. All they do is get the international community riled up.

Now, it’s not only the Arab and Islamic countries that warrant highlighting. Other countries talk a big game about the Palestinian cause. In 2017, China provided 350,000 to UNRWA. Russia provided two million dollars to UNWRA.

Again, if you judge a nation’s commitment to the Palestinian people by the words heard in this chamber, you might come to the conclusion that the United States has been less generous, simply because we stand proudly with our ally Israel here at the UN.

But once again, this conclusion would be entirely false.

And that’s on top of what the American people give annually to the Palestinians in bilateral assistance. That is another 300 million dollars just last year, and it averages to more than a quarter of a billion dollars every year since 1993.

Words at the United Nations or actions on the streets and in the schools of Palestinian communities – which matters more?

Judging by the vitriol that is directed toward the United States from the Palestinian representatives, including the one here today, and from some of their allies, one might fairly conclude that our support is unappreciated or unwelcomed.

Americans are very generous people. We are humanitarian oriented people. And we continue to seek out ways to help the Palestinian people, whose plight is of genuine concern to us.

But we are not fools.

If we extend a hand in friendship and generosity, we do not expect our hand to be bitten.

And as we extend our hand, we also expect others to extend their hands as well.

The Palestinian leadership has been allowed to live a false reality for too long because Arab leaders are afraid to tell them the truth. The United States is telling the truth because we do care about the Palestinian people.

So the next time we have a meeting like this in the Security Council or in the General Assembly, and we hear speech after speech about the plight of the Palestinian people, I would ask those who are making the speeches to examine what your country is doing to help – other than speechmaking.

It is time for the regional states in particular to step up and really help the Palestinian people, instead of just making speeches thousands of miles away.