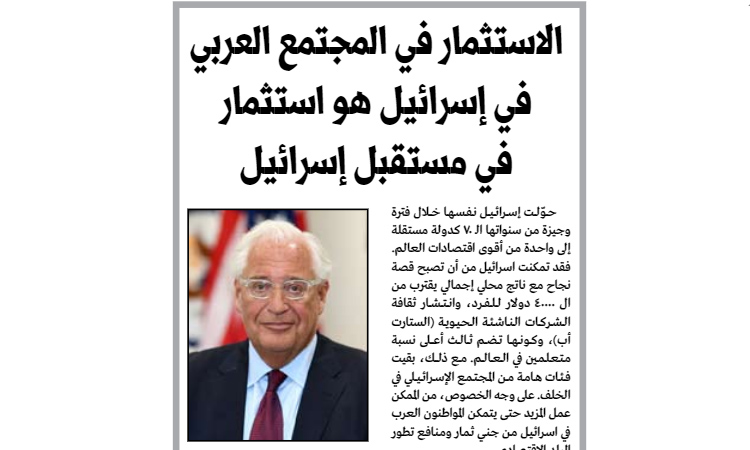 In the short span of its 70 years as an independent nation, Israel has transformed itself into one of the most robust world economies.  With per capita Gross National Product nearing $40,000, a dynamic start-up culture and the third-most educated population in the world, Israel is a success story.  That said, there are significant segments of Israeli society left behind.  In particular, more can be done to ensure that Israel’s Arab citizens reap the benefits of the country’s economic development.

Arab citizens make up more than 20 percent of Israel’s population, but they represent only 8 percent of Israel’s GDP and 3 percent of high-tech workers. An inclusive economy is a strong economy, and one that fosters social cohesion over the long run. There is no reason that the Arab community cannot prosper alongside other sectors.

I believe the key to improving the economic status of Arab citizens of Israel is through brainpower. When I made a visit to Nazareth a few months ago, I was greatly impressed by the intellectual capacity and creativity of the people I met at the Nazareth Business Incubator Center and the Nazareth Industrial Park.  These highly educated men and women demonstrated the innovation and determination that are hallmarks of the most successful entrepreneurs in this start-up nation.  At the same time, however, they told me that it was difficult to attract investors who were willing to bet on their ventures.

This week the U.S. Embassy teamed up with the Ministry of Social Equality to spotlight the vitality of Nazareth’s start-up ecosystem, inviting investors from the United States and Israel to meet this next generation of Arab entrepreneurs. At the conference, Arab-led start-ups from across Israel pitched their nascent companies to potential investors.  It is too early to measure the impact, but they clearly opened the eyes of investors who were unaware of the promise of Arab-led start-ups.

While private sector investment is crucial, I must recognize and applaud the Israeli government’s efforts to bolster the socioeconomic status of its Arab population. Since 2015, the government, under the purview of Prime Minister Binyamin Netanyahu and Minister Gila Gamliel, has been executing Resolution 922, a 15-billion-shekel, five-year plan for ministries to dedicate part their budget toward projects that improve the educational, entrepreneurial, and health opportunities of Arab communities in Israel.

Israel’s economy and its social fabric stand to benefit significantly from tapping into the well of strength and ingenuity found in the Arab community. One lesson we have learned in the United States is that when we value diversity and social inclusion we create stronger and more cohesive communities that contribute more to the growth and prosperity of the entire country.

A thriving, integrated Israeli society that gives all of its citizens the opportunity to prosper is an Israel that will be better situated to forge enduring peace with its neighbors.  Arab citizens of Israel – who often create companies with Jewish partners – are also working with Palestinians and Arabs in the West Bank and beyond.  Their ability to work across borders and across cultures provides a model for deeper integration across the region in the future.  That future is something in which the United States is ready and willing to invest.