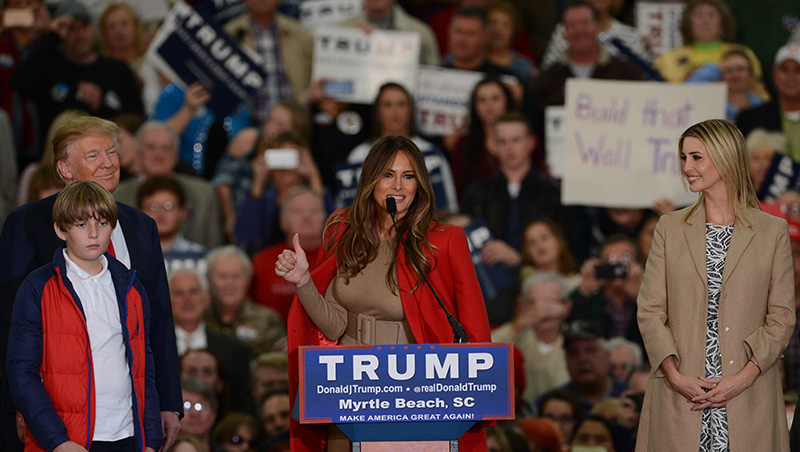 First Lady of the United States Melania Trump is the wife of President Donald J. Trump, and was born on April 26, 1970 in Slovenia.

Melania Knavs began her modeling career at the age of sixteen. She would pursue a degree at the University of Ljubljana in Slovenia, but pause her studies to advance her modeling career in Milan and Paris before moving to New York in 1996.  As a model, Melania has appeared in high profile ad campaigns and worked with some of the top photographers in the fashion industry, including Patrick Demarchelier, Helmut Newton, Arthur Elgort, Ellen Von Unwerth, Peter Arnell, Antoine Verglas and Mario Testino. She has graced the covers of Vogue, Harper’s Bazaar, British GQ, Ocean Drive, Avenue, In Style, and New York Magazine. Her major layouts include the Sports Illustrated Swimsuit Issue, Allure, Vogue, Self, Glamour, Vanity Fair, and Elle. In addition, Melania has appeared in numerous television commercials and television programs, including co-hosting The View with Barbara Walters.

With a penchant and passion for the arts, architecture, design, fashion and beauty, Melania has thrived on the cultural diversification of New York City. This passion can only be surpassed by her dedication to helping others, and her generosity has been noted. She was Honorary Chairwoman for Martha Graham Dance Company in April 2005, is an active member of the Police Athletic League which honored her with Woman of The Year 2006, has been an Honorary Chairwoman for The Boy’s Club of New York for five consecutive years, and in 2005 The American Red Cross awarded her with Goodwill Ambassador which she has proudly served for four years.  In April of 2008, she was asked by Love Our Children USA and NASDAQ to participate in the Fifth Annual National Love Our Children Day and the beginning of National Child Abuse Prevention month by ringing the closing bell at NASDAQ.  In 2010, Melania was the Chairwoman for The American Heart Association which raised $1.7 Million for research.  Melania’s philanthropic interests represent her humanitarian side, and she remains an indefatigable and dedicated New Yorker.

Melania is also a successful entrepreneur. In April 2010, Melania Trump launched her own jewelry collection.

Mrs. Trump cares deeply about issues impacting women and children, and she has focused her platform as First Lady on the problem of cyber bullying among our youth.