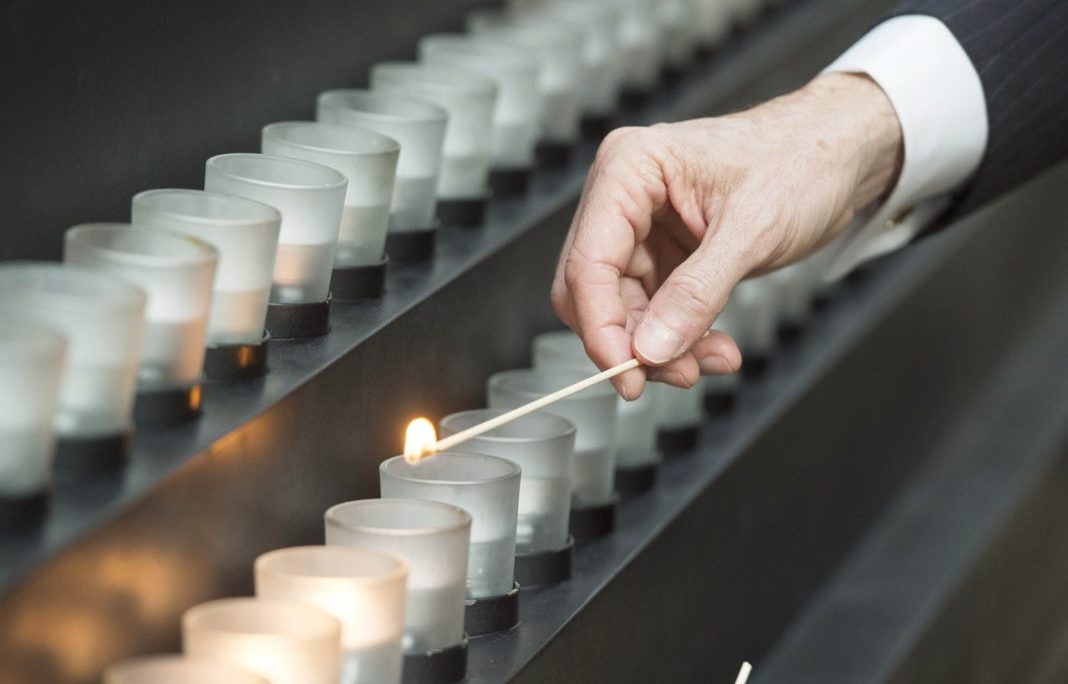 In the U.S, and other nations, memorials stand as continual reminders of the horror of the Holocaust and the importance of confronting the evils that brought it about. The United Nations designated January 27 — the anniversary of the liberation of Auschwitz-Birkenau concentration camps — as International Holocaust Remembrance Day.

“This is my pledge to you,” President Trump said in 2017 at the U.S. Holocaust Memorial Museum: “We will confront anti-Semitism. We will stamp out prejudice. We will condemn hatred. We will bear witness. And we will act.”

The eight memorials shown below represent a fraction of the statues, museums, gardens and other places of remembrance throughout the world that honor the 6 million Jewish victims of the Holocaust and millions of other victims of Nazism.

The Hall of Names at Yad Vashem in Jerusalem commemorates the life of every Jew who died in the Holocaust. The ceiling of the hall, pictured here, is a 10-meter-high cone reaching skyward, displaying 600 photographs, a fraction of the Jewish men, women and children murdered during the Holocaust.

The Memorial to the Murdered Jews of Europe in Berlin comprises 2,711 concrete steles — slabs used since ancient times to memorialize the dead — arrayed in a grid over a sloping field. Designed by architect Peter Eisenman, its 19,000 square meters cover a former stretch of the Berlin Wall south of the Brandenburg Gate.

Israeli artist Yaacov Agam created the Holocaust memorial in New Orleans’ Woldenberg Park, located on the bank of the Mississippi River in Louisiana. Its nine panels depict different images depending on the viewer’s position, starting with the Star of David and moving to darkness and chaos, then faith, hope and renewal.

Vienna’s Holocaust memorial is built on Judenplatz, the center of Vienna’s Jewish life in the Middle Ages and the site of a historic synagogue. The steel and concrete memorial, known as the Nameless Library, is designed as library shelves with the spines of their books facing in, representing the unfinished lives of victims of the Holocaust.

Not far from the Hungarian Parliament in Budapest, the Shoes on the Danube Promenade memorializes thousands of Jews killed by fascist militia in 1944 and 1945. The victims were made to remove their shoes before being shot and falling into the river. The sculpted shoes of men, women and children are affixed to the riverbank as a permanent reminder.

A four-story-high outstretched arm is the centerpiece of Miami Beach’s Holocaust Memorial in Florida. The arm is tattooed with a number from Auschwitz, and hundreds of small figures cling to it. “The immensity of this tragedy is infinite,” said its sculptor, Kenneth Treister. “To express it artistically, impossible … but I had to try.”

The Mémorial des Martyrs de la Déportation in Paris commemorates the 200,000 Jews, homosexuals, Roma (also known as Gypsies) and political opponents of the Nazis deported from France to concentration camps during World War II. Beyond the tomb of an unknown deportee is an alley of 200,000 glass crystals to honor the dead.

The Pit, a memorial to Holocaust victims in Belarus, is built on the site where Nazi forces murdered 5,000 prisoners of the nearby Minsk ghetto. The bronze sculpture, called The Last Way, portrays prisoners forced to descend to their deaths.