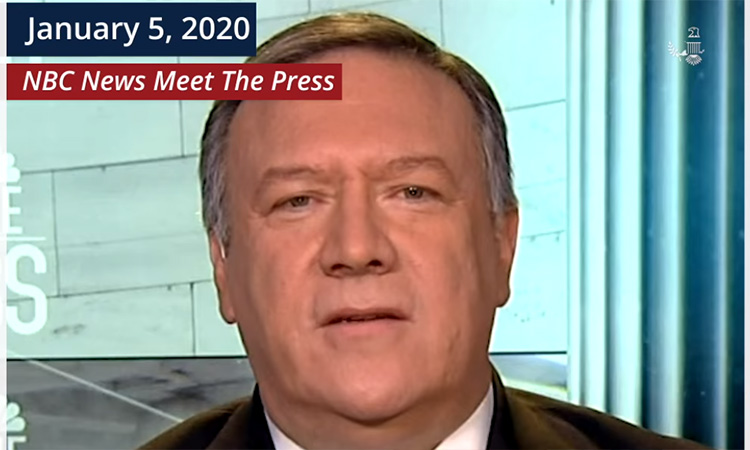 Secretary Pompeo appeared on Meet the Press today to discuss the decisive defensive action President Trump took this past week to prevent terrorist activity and save Iraqi and American lives.

QUESTION: Joining me now is the Secretary of State, Mike Pompeo. Secretary Pompeo, welcome back to Meet the Press, sir.

SECRETARY POMPEO: Good morning, Chuck. It’s good to be with you this morning.

QUESTION: Let me start with the shooting – the strike against Soleimani, the killing of him. He’s been a threat to the United States, to U.S. interests, for years. Why now? Why was it urgent this week?

SECRETARY POMPEO: Well, Chuck, you’ve captured it. We’ve all known about Qasem Soleimani for a long time. He’s been a terrorist. He’s a designated terrorist. He’s someone who has afflicted many deaths on Americans, over 600 in Iraq, in countless other places. He was even connected to what happened in Beirut so many years ago. You would know this, too, Chuck.

This was different in the sense of we’ve seen recent deaths, a recent killing on December 27th. A strike, an operation conducted by Kata’ib Hizballah, directed and orchestrated by Soleimani himself, killed an American. We could see that he was continuing down this path, that there were, in fact, plots that he was working on that were aimed directly at significant harm to American interests throughout the region, not just in Iraq.

And President Trump made the decision this was the time to stop this reign of terror from this guy who was the glue, who put this all together, who was the IRGC leader for, goodness, a couple of decades and who had put so much pain and suffering on the American people and, frankly, the people in the region, too.

QUESTION: Why are you —

SECRETARY POMPEO: Hundreds of thousands of deaths in Syria, millions displaced in Syria. This was a bad guy, and it was time to take him out.

QUESTION: Is it that imminent? Is the threat – is what the attacks he was putting together so imminent and so big it would have been seen as that kind of negligence?

SECRETARY POMPEO: We made the right decision. There was lots of intelligence. You’ve seen some of it’s out in the public, right? The death of the American on December 27th. We had intelligence on the go forward basis of risk as well. The President made the right decision. We will reduce risk. I think General Milley said: Is there still risk of attack? Of course there is. There’s a tremendous risk. We’re doing everything we can to make sure that we take that down and protect American lives. That’s the mission set.

When the President laid out his National Security Strategy three years ago, this is all in the context of a larger American strategy to create peace and stability in the Middle East. A key element of that is taking down Qasem Soleimani, who has been such a destabilizing force in the region for so long.

SECRETARY POMPEO: Chuck, it’s never one thing. You’ve been at this a long time. The American people are smart, too. It’s never one moment. It’s never one instance. It’s a collective. It’s a full situational awareness of risk and analysis. And I am confident – and the Intelligence Community presented us a set of facts that made clear – that the risk from doing nothing exceeded the risk of taking the action that we took. And we made the right decision; we protected and defended the American people. And as President Trump has said repeatedly, as he tweeted again just last night, we will continue to take all actions necessary to preserve and protect and defend America.

QUESTION: Can you confidently say America is safer today?

QUESTION: How do you square that statement with the fact that we’re bringing – you’re advising American citizens essentially to leave the region if – particularly Iraq. We have the Homeland Security Department bracing Americans for cyber attacks, saying that we know the Iranians have been through our infrastructure, it is likely to happen and there won’t be a warning from it. It doesn’t sound like we’re safer today after this.

QUESTION: Then why did we put out that warning after the Soleimani – I mean, we do expect retaliations against American citizens now, correct?

SECRETARY POMPEO: Chuck, you’re concentrating on the second and the moment. President Trump is focused deeply on keeping Americans safe over the long haul. Preserving and protecting and defending America is the mission that we have. It may be that there’s a little noise here in the interim and that the Iranians make the choice to respond. I hope that they don’t. President Trump has made clear what we will do in response if they do, that our response will be decisive and vigorous, just as it has been so far.

But we’re going to take all actions necessary, not only in Iraq but throughout the region, to protect Americans, American citizens as well as my diplomats and servicemembers who are serving overseas. We’re always going to do the right thing to protect America, and I am confident that the decision we make – made to take down this terrorist, this designated terrorist who had inflicted so much harm over such an extended period, was the right course of action to reduce risk to America.

QUESTION: During the State Department briefing on Friday, the aides that were not put on – named, but there was a lot of confidence being expressed without a lot of evidence that you thought there’s – the Iranians aren’t going to – they might – they likely won’t retaliate. Why do you think they won’t? Why do you have this potential confidence that they may not retaliate?

SECRETARY POMPEO: Chuck, we’re prepared for everything. I’m not going to get into the game of predictions. We have intelligence. We have lots of reconnaissance. We have good observation of what’s taking place. What we’re doing is preparing for all possible courses of actions that the Iranian regime may take, and we are driving – we are driving a strategy that we have had in place now for three years – diplomatic, economic, now military – to convince the Iranian regime to simply behave like a normal nation and to raise the cost when they inflict harm on America if they don’t.

SECRETARY POMPEO: Just the opposite, Chuck. We suffered from eight years of Iranian support from America. We gave them billions of dollars. We gave them resources. We allowed countries to trade with them, to build up their economy. What we are now having to correct for is the enormous economic activity that took place during this Iranian nuclear deal that President Trump rightly got out of in May of 2018. It’s taken a little bit of time and it will continue to take time, but are going to restore deterrence. We just had a big hill to climb up, Chuck.

We had seen hundreds of thousands of people killed in Syria, millions had to depart the region. We’d seen Lebanese Hizballah, Hamas, the PIJ in Gaza Strip – all of these terror organizations, the Shia militias, the Shia militias that we are now challenged to push back against today – all underwritten by American policy in the Obama administration. We’ve flipped the switch. We’re draining those resources. We’re going to protect America and keep American people safe.

QUESTION: I’m curious, how do we get out of a cycle of escalating violence? I want to – the President tweeted yesterday saying this: We have targeted 52 Iranian sites, representing, he said, the 52 American hostages taken back in 1979, and he said to Iran those targets and Iran itself, we’ll hit very fast, very hard. He even noted there were cultural sites that were being targeted. Is that already being lined up at the Pentagon, that we have our response ready for whatever Iran – and we have target sites here, these 52 target sites? Can you confirm that?

SECRETARY POMPEO: Chuck, the American people should know that we have prepared for this, that we are ready.

SECRETARY POMPEO: That our responses are lawful and that they – the President will take every action necessary to respond should Iran decide to escalate. We hope that they don’t. We’ve communicated clearly and crisply to them with respect to what it is we have as an expectation. And we have communicated clearly and crisply what we will do in response if they choose another path. We hope that they will not, but we are prepared in the event that they choose to do so.

QUESTION: Finally, what do you tell the families that have – there are some Americans being held hostage by this Iranian regime. What do you tell Americans right now, who – I know they’ve been working with the you at the State Department, those families, who probably look at this and think okay, whatever progress we were making, no more progress. Is that – is it – is that what these families have to prepare for, that maybe their loved ones are going to be there longer, not shorter?

SECRETARY POMPEO: I love these families. They are suffering greatly. They’re suffering from the very Iranian regime we’re seeking to counter. Most of these folks were taken during the previous administration. It was a policy that was designed to guarantee that the Iranian regime would have power, authority, capacity to take Americans, but not only Americans, other Westerners too.

Those families should know that we’ve built out a coalition. We’re patrolling the Straits of Hormuz with that coalition. There is an air defense strategy attached to the coalition. We’ve gotten multiple countries now to sanction Mahan Air. We have built out a strategy that will ultimately put America in a place where the Iranian regime will no longer threaten American hostages.

And they should know this, too. We have worked diligently to get those held in Iran back. We had one returned just within the last several weeks. We continue to work on that process, to get every American held anywhere in the world, including by the kleptocrats and theocrats in Iran, to get them to return American hostages. We will never give up on that mission.

SECRETARY POMPEO: As I said before, Chuck, we’ve clearly stated our strategy for three years. We want the regime to change its behavior. And ultimately, the leadership in Iran will be determined by the Iranian people. We saw the protests. I am confident we will continue to see protests. They weren’t protesting against America. They weren’t protesting saying, “Death to America.” They were demanding that the Iranian leadership behave in a way that takes care of the Iranian people. I am confident that the American support that we provide to that and support that’s provided from countries in the region and around the world will continue to support the Iranian people in their quest for freedom.

QUESTION: Secretary Pompeo, I’m going to have to leave it there.

QUESTION: Thank you for coming on and sharing your view, sir. I appreciate it.