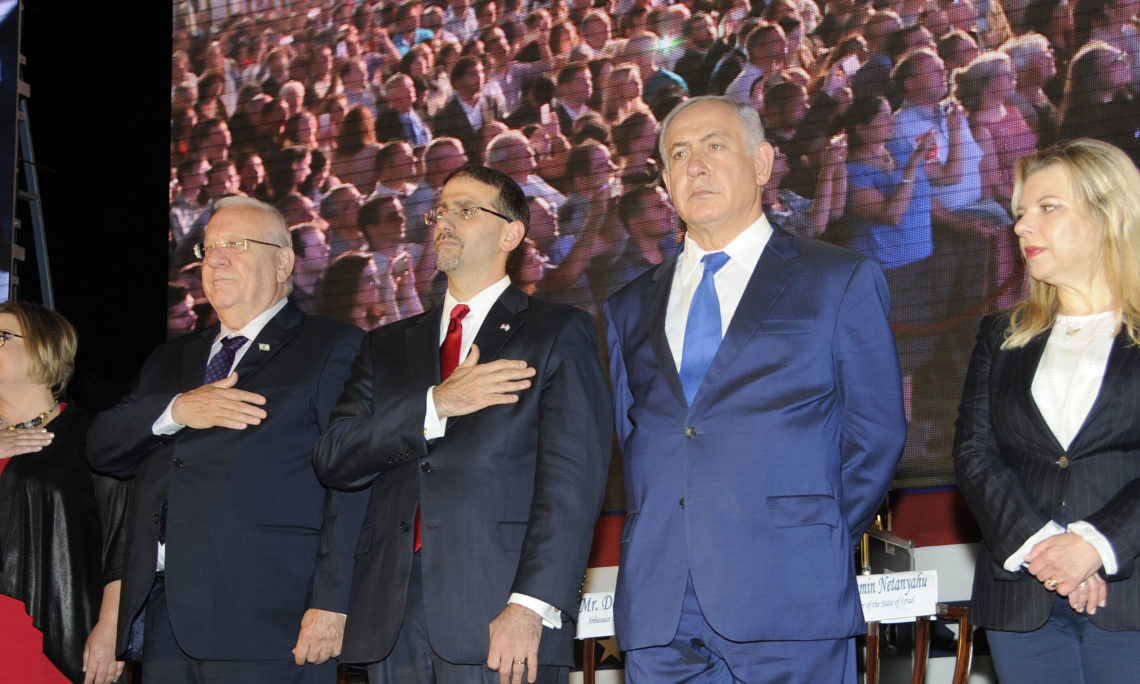 A TRIBUTE TO OUR FOUNDERS

Good evening everyone, and welcome!

Tonight is a celebration, but before I begin my remarks, I must acknowledge the terrible tragedy and outrage that is on all of our minds.  The murder of 13-year-old Hallel Ariel, z”l, was an unspeakable act of terrorism.  I want to restate my government’s and my personal unequivocal condemnation of this terrorist act, for which there can be no justification. Our hearts are heavy and they are with Hallel’s family, and we wish a speedy recovery to those injured in the attempted rescue.

You honor us with your presence at our celebration.

We feel privileged to host you in our home. And it is only a small measure of the hospitality you have shown me. I come through your offices so often – with the President, the Vice President, the Secretary of State, Cabinet Secretaries, Members of Congress, or my own visits – so often that I am tempted some days to ask for my own desk and cubicle and parking place.

But I do feel very much at home and want you to equally feel at home here in our house.

Let me also welcome our special guests from the United States, including Congressman Ted Deutch from the great state of Florida.

On behalf of President Barack Obama, Vice President Joe Biden and Secretary of State John Kerry—and on behalf of the entire American people—we thank all of our Israeli guests for their partnership and their friendship.

Julie and I also want to personally thank you for joining us and our colleagues from the U.S. Embassy for this celebration of America’s independence.

Let me briefly acknowledge our generous sponsors, who helped make this beautiful event possible. You will see a list in your program, a list that includes our fireworks sponsor—Boeing—which is also celebrating its 100th anniversary. Please join me in thanking all of the sponsors.

Let me also offer Ramadan greetings to our guests who are celebrating the holy month. Ramadan Kareem.

I also want to thank all of the musical talent we heard tonight, including our anthem performers, Brett Loewenstern, Amitai Levin, and Kinneret Hendeles; one of Israel’s hottest bands, the great A-WA; Niv Harnam and Tal Ardity of the Rimon School of Music; and a special thank you to the U.S. Naval Forces Europe Band – Flagship.

To our entire U.S. Embassy staff, Israeli and American, I offer an enormous, heartfelt thank you for this amazing event, and for everything you do year round.

You hosted so many high-level visitors this year; you welcomed so many American navy ships and armed services personnel; you renovated and built so many facilities; you protected all of us and countless official visitors; you engaged with dozens of local communities in every corner of this country; and you hosted numerous trade visits. Trust me, it’s a challenge just to keep track.

And since we do not take enough opportunities to thank our dedicated Embassy community – the spouses and partners who make enormous sacrifices, including interrupted careers, yet who contribute to our mission in innumerable ways, and our family is no different – let me also offer a special acknowledgement to our spouses and families.

One of our staff’s many accomplishments this year is featured at our event tonight — and I hope the folks at the buffet in the back can hear me — and it is American kosher beef.

At this reception, we are pleased to be serving the first American beef imported to Israel in over twenty years. Our governments have worked hard over a long period to re-open this trade channel and I know Israeli consumers will be delighted as the first imports—from the great state of Nebraska, I should add—reach Israeli kitchens, b’ezrat ha’shem, later this year.

Tonight, we are fortunate to have with us so many special guests from all walks of life in Israel, so many agents of change:

You represent the best of our shared values. And you also carry forward the legacy of Israel’s founders – dor ha’meyasdim – those fearless, wise and innovative pioneers who established Israel.

Some of Israel’s founding generation and those who built this nation from its infancy are the Embassy’s frequent guests and our partners. They continue to provide me with valuable counsel.

People like Moshe Arens, former President Shimon Peres, and many others. Your engagement and your friendship is a blessing. Some of these founders are even with us this evening. All are in our hearts.

Still, others were lost this past year, like Lou Lennart, z”l, “the man who saved Tel Aviv.”

Lou was an American and part of MACHAL, the overseas volunteers who came to Israel in its most dire hour. I stood at the MACHAL memorial at Shaar Ha’gai two months ago, on Yom HaZikaron.

It was there that I met Tzipora Porath, an American who fought for Israel in 1948. Tzippy—who at 92 still has all the vigor of a young Hagana recruit—was among about eight hundred Americans who came here, including the first commander of Israel’s navy.

They risked everything to fight for an ideal. Their sacrifice, their values and their vision laid the foundation for the U.S.-Israel alliance of today. These courageous freedom fighters also harken back to America’s founders.

Unlike Israelis, Americans long ago said goodbye to their founding generation. But I suspect if our founders could meet up with Israel’s founders, they could find much in common – a love of freedom, a commitment to principle over personal gain, a willingness to take risks, and an ability to overcome seemingly insurmountable obstacles.

For most of the past two centuries, our founders have been with us only as legends and as guiding lights.

Yet they remain as honored today as they were in Philadelphia on that momentous July day in 1776.

When they gathered to declare our independence, our visionary founders pledged their lives, their fortunes, and their sacred honor.

These were not empty pledges. Many lost their lives, their family members, their homes, or their fortunes in the terrible, costly war that was necessary to achieve our independence.

Yet our founders demonstrated that through personal sacrifice, through the defense of universal values, and through their vision and leadership, they could bestow upon future generations an endowment of freedom and an inheritance of democracy.

Americans feel a deep bond to our founders to this day. Biographies,  films and musicals about the founders continue to be hugely popular; their homes and museums remain some of our most visited destinations; and anyone who has been to New York the past two years knows that Broadway is experiencing a whole new love affair with the founders.

Alexander Hamilton, who left an indelible imprint on our constitution, on our armed forces, and on our financial system, can now claim no less than eleven Tony awards.

Our first President, George Washington, is still revered for his stoic resolve in the face of adversity, and his steady, calming hand guiding the fragile new country through its birth and infancy.

Thomas Jefferson, our third president, penned the Declaration of Independence, which is the cornerstone of the values we consider at the very heart of our democracy, “that all men are created equal and endowed by their Creator with certain unalienable Rights, that among these are Life, Liberty and the pursuit of Happiness.”

The intellectual James Madison, our 4th president, is often referred to as “The Father of the Constitution,” as he authored the first drafts, was one of its principal defenders in “The Federalist Papers,” and was a chief sponsor of the Bill of Rights.

Many of our founders, by the way, were immigrants, like Hamilton, who arrived in the thirteen colonies from the Caribbean islands. Others were signers of the Constitution and some of the first justices of the U.S. Supreme Court.

Immigration, openness, and opportunity, have always been among the values at the very heart of America.

“Our Founders conceived of this country as a refuge for the world,” President Obama said last week. “And for more than two centuries,” he added, “welcoming wave after wave of immigrants has kept us youthful and dynamic and entrepreneurial. It has shaped our character, and it has made us stronger.”

At this time when we are witnessing unprecedented waves of migration, at this time when millions are fleeing war and despair, we are renewing our commitment to the vision of our founders – a vision of a nation that welcomes with open arms all who want to build with us.

Our founders were not perfect, of course, which they knew and acknowledged. They were flesh and blood. They reflected the prejudices of their time. Their vision had its limits, and even their greatest accomplishments fell short of extending the gifts of freedom to all of America’s inhabitants.

Yet they led with a deep awareness of the frailties of human society and had the wisdom to establish a system of government that could protect its own institutions and principles against human weakness. With great foresight, they understood that they needed to establish a system that could evolve and adapt in order to ensure “a more perfect union.”  They gave us the tools to make that happen.

Subsequent generations of Americans have stood on their shoulders and improved our union by abolishing slavery, establishing universal civil rights, ensuring equal rights and opportunities for women and minorities, empowering persons with disabilities, and enshrining marriage equality into the law, to name just a few examples.

Our work to fulfill the vision of our founders continues.

Even as we celebrate our independence, the great gift of freedom, we are deeply aware that here in Israel, the struggle to enjoy all of freedom’s gifts – peace, security, and recognition – still continues.

As does the struggle against terrorism, a scourge we condemn without equivocation, and call on all others to do so.

We are perhaps even more attuned to this struggle as we also mourn our own painful losses, like the dozens murdered and injured in Orlando two weeks ago.

The United States and Israel are partners in all of these struggles.

Whether it is the edge we provide diplomatically in international fora; or the edge we provide on the battlefield through next-generation systems like the F-35 Joint Strike Fighter and our extensive support for Israel’s missile defense; or our steadfast commitment to seek and promote peace between Israel and its neighbors, including the Palestinians; we are Israel’s partners.

Fighting for Israel—for its security, for its freedom, for its prosperity, and for its ability to live at peace with its neighbors—this was a commitment President Obama has demonstrated from his very first day in office. And he will carry forward until his last day in office.

It is a commitment, in its essence, to enable Israelis to live their founders’ vision of “being a free people in our land.”

And it is a commitment rooted in the story of the birth of our own nation and the great sacrifices we made to secure our own freedom.

This commitment to freedom is at the very core of the American story, and it remains at the center of the special friendship between our nations.

Thank you again for joining us tonight.