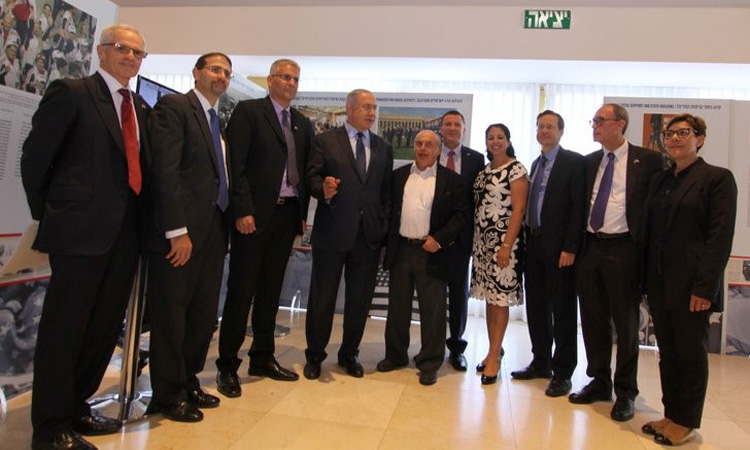 I am grateful to all the leaders of the Knesset who are honoring the Jewish-American contribution to the Yishuv and the State of Israel, and opening the exhibition, “Stripes, Stars, and Magen David.”

As May is the month designated by the U.S. Congress as Jewish American Heritage Month, there could be no more appropriate time for this occasion.

It is impossible to fully capture the Jewish American contribution to the Yishuv and Israel in just a few minutes.

The roots of this contribution run deep, and it is difficult to single out any one moment as the most important, but some episodes of great drama deserve mention.

As the guns of August began to ring out in August 1914, and the world went to war, the Jewish community in Eretz Yisrael found itself in great distress, cut off from sources of sustenance and under threat.  President Woodrow Wilson’s Ambassador to the Ottoman Empire, the American Jewish leader, Henry Morgenthau, sent an urgent cable to the President of the American Jewish Committee, Jacob Schiff in New York.

The community sprang into action, raising the necessary funds.  Within weeks, the American naval cruiser USS North Carolina anchored off Jaffa to deliver the needed assistance, the first of several US navy ship visits that helped sustain the Yishuv during World War I under the leadership of the newly established American Jewish Joint Distribution Committee.

During those years, the great American Jewish jurist, Louis Brandeis, emerged as the community’s foremost advocate of the establishment of a Jewish state in Eretz Yisrael.  He educated Presidents and Members of Congress, expanded support for Zionism within the Jewish community itself, raised prodigious funds for the Yishuv, and even helped secure a signal of support from President Wilson to the British government ahead of the issuance of the Balfour Declaration.

At each subsequent turn, during the struggle to establish and sustain the Jewish state, American Jews have been critical supporters of the cause.  Whether it was Henrietta Szold’s founding of Hadassah, the women’s Zionist organization, an initiative that quickly transformed life in the Yishuv and Israel and helped define public health, education, youth aliya for generations; or President Truman’s associates, Eddie Jacobson and Samuel Rosenman, arranging his fateful meeting with Chaim Weizmann which helped persuade him to recognize the State of Israel in 1948; or volunteers to the Machal forces, who fought and, in the case of dozens, like Colonel David “Mickey” Marcus, died in the War of Independence; or key rabbis, community leaders, diplomats, Members of Congress and others who have been strong advocates for U.S. assistance to Israel in its moments of need and for U.S. support to Israel’s search for peace; or the latest generation of volunteers like Max Steinberg, z”l, who fell during Operation Protective Edge – these efforts have been renewed in each generation.

American Jews have founded kibbutzim and new communities, including Ein HaShofet, named for Justice Brandeis, and supported immigration and absorption, including the waves from Arab lands, Ethiopia, and the former Soviet Union. They are generating life-changing partnerships between communities—like those sponsored by the JFNA; are supporting virtually all of Israel’s independent health, education, welfare, peace and shared society, environmental, human rights and cultural institutions; and are injecting a uniquely American entrepreneurial spirit into Israel’s economy. American Jewry has proven itself to be a generous and reliable supporter of Israel in ways that go well beyond dollars or lobbying or public statements.

These acts are ma’asim tovim; these are g’milut hasadim.  They are stories of individual bravery; of political courage; of generosity and kinship; of a community’s commitment to protect and defend its own.

American Jewry has also made significant contributions to the norms and values that bind our two countries.

In the United States, American Jewry has been at the forefront of the struggles for civil rights, religious pluralism, the rule of law, social justice, and so many other issues. Those struggles, often pursued by our leading religious streams, Reform, Conservative, and Orthodox, which are all strongly represented and deeply rooted in Israel, define the very best of the common values shared by Israel and the United States.

Last, but certainly not least, American Jewry has made a vital contribution to nurturing and sustaining the extraordinary alliance between the United States and Israel.

Our alliance is premised on common values, and these values compel us to say that our commitment to Israel’s security is unwavering.

President Obama, with deep ties of his own to the American Jewish community, has articulated this commitment well. “It would be a moral failing on the part of the U.S. government and the American people,” he said, “it would be a moral failing on my part if we did not stand up firmly, steadfastly not just on behalf of Israel’s right to exist, but its right to thrive and prosper.”

In addition to being the American ambassador to Israel, I am also a Jewish American. My family is part of this intricately woven fabric of a century of contributions to Zionism and Israel. It is a source of enormous pride for me, on a personal, communal and professional level.

I want to close by saying I look forward to the next century and beyond. I am confident this extraordinary bond between a state and its people—a bond that has been instrumental in breaking with two millennia of statelessness and in forging a new future for the Jewish people–will continue to enrich my country and yours for generations to come.