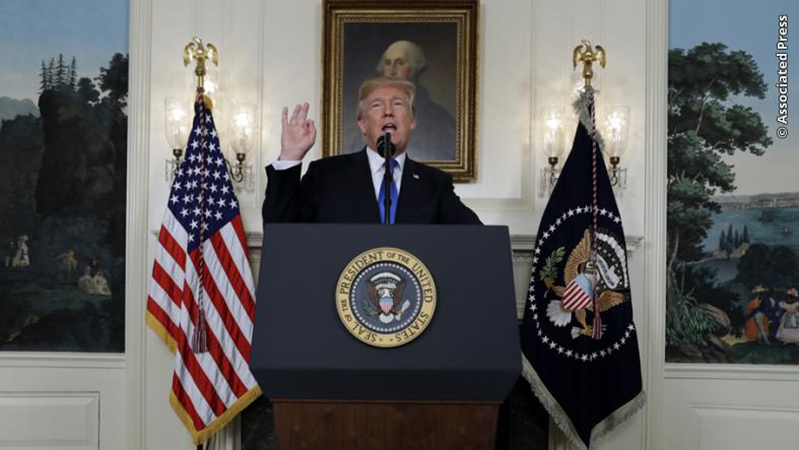 On October 13, President Donald J. Trump announced a new strategy on Iran and outlined a number of steps the United States is taking to confront the Iranian regime’s hostile actions and ensure the country never acquires a nuclear weapon. President Trump noted that this new strategy comes after a complete  review of U.S. policy toward Iran. The President said, “Our policy is based on a clear-eyed assessment of the Iranian dictatorship, its sponsorship of terrorism, and its continuing aggression in the Middle East and all around the world.”

As part of the strategy, the United States will first work with our allies to counter the Iranian regime’s destabilizing activity and support for terrorist proxies in the region. Second, we will place additional sanctions on the regime to block their financing of terror. Third, we will address the regime’s proliferation of missiles and weapons that threaten its neighbors, global trade, and freedom of navigation. Finally, we will deny the regime all paths to a nuclear weapon.

The execution of our new strategy begins with imposing tough sanctions on Iran’s Islamic Revolutionary Guard Corps (IRGC). The IRGC’s stated purpose is to subvert the international order. The IRGC’s power and influence have grown over time, even as it has remained unaccountable to the Iranian people. It is hard to find a conflict or a suffering people in the Middle East that the IRGC’s tentacles do not touch.

Our partners in the international community agree with us that the IRGC’s reckless behavior threatens international peace and security. They agree that the IRGC is fanning sectarianism and perpetuating regional conflict. They agree that the IRGC is engaged in corrupt economic practices that exploit the Iranian people and suppress internal dissent, human rights, and Iran’s economic prosperity. For all these reasons, we want to work with our partners to constrain this dangerous organization, for the benefit of international peace and security, regional stability, and the Iranian people.

The President also discussed the 2015 Iran Nuclear Deal, known as the Joint Comprehensive Plan of Action (JCPOA).  President Trumpp said, “By its own terms, the Iran Deal was supposed to contribute to ‘regional and international peace and security.’ And yet, while the United States adheres to our commitment under the deal, the Iranian regime continues to fuel conflict, terror, and turmoil throughout the Middle East and beyond. Importantly, Iran is not living up to the spirit of the deal.”

When the agreement was finalized in 2015, Congress passed the Iran Nuclear Agreement Review Act to ensure that Congress’s voice would be heard on the deal. Among other conditions, this law requires the President, or his designee, to certify that the suspension of sanctions under the deal is “appropriate and proportionate” to measure — and other measures taken by Iran to terminate its illicit nuclear program.

President Trump announced that he will not certify Iran’s compliance with the JCPOA stating, “We will not continue down a path whose predictable conclusion is more violence, more terror, and the very real threat of Iran’s nuclear breakout.” The President added that his Administration is working with the Congress and the United States’ allies to address the JCPOA’s flaws, including the deal’s sunset clauses which will eliminate key restrictions on Iran’s nuclear program, as well as insufficient enforcement and oversight of Iran’s missile programs.

As he concluded, the President focused on the Iranian people, who, he said, “have paid a heavy price for the violence and extremism of their leaders.” President Trump shared his hope that these new measures directed at the Iranian dictatorship will compel the government to re-evaluate its pursuit of terror at the expense of its people and ultimately lead to a more peaceful, prosperous, and secure future in the Middle East and beyond.