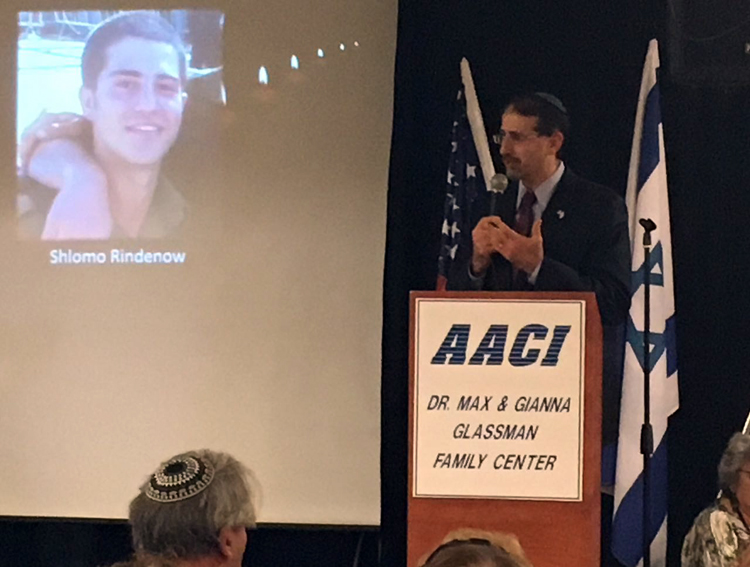 I would like to begin by thanking the National Memorial Committee of the Association of Americans and Canadians in Israel for organizing this very significant and important ceremony.  Thank you Donna Grushka and Rabbi Karzen for your tireless and dedicated work in helping us remember the fallen.

Sadly, this year there are 13 new names to be added to the plaques at the memorial at the AACI forest, a memorial dedicated to the memory of Americans, Canadians, AACI members and members of their families who gave their lives for Israel, either as soldiers or victims of terror.

I’ve taken part together with my colleagues from our Embassy in trying to comfort so many of these families. I attended the funeral of Richard Lakin, an educator , a deeply gentle man, who spent his life as an educator helping Israeli and Palestinian students alike, and dedicating himself to finding commonalities irrespective of race, color, religion or creed.

I’ve seen and heard the terrible story of Hallel Yaffa Ariel, murdered in her bed at the age of 13, a place where under any normal circumstances a child should feel the warm embrace of unconditional love and safety.  As I wrote at the time, “there is never any justification for such acts of terrorism.” And this is of course also true of the deaths of Avraham Goldman, Yair Mordechai, Chaim Rothman, Yonatan Suher, Taylor Force, Eitam and Naama Henkin, Michael Mark, Ezra Schwartz and Tuvia Yanai Weissman .

I’ve tried to offer each of these bereaved families what comfort I could on the loss of their loved ones, as well as to the family of Sargent Shlomo Rindenow.

This delicate balance between life and death is an existential fact of Israel’s day to day existence, and that’s a fact that’s very well understood by Americans. And that’s why I want to thank you for giving me this opportunity to reiterate today my government’s absolute support and undying standing with the State of Israel as a friend and as an ally, deeply committed to Israel’s security and its independence.

We know what that means. Even in the last days, yesterday and today, rockets have fallen in southern Israel and the communities there near the Gaza Strip.  So many of us have visited schools damaged by rocket fire.  So many of us have visited hospital beds with victims of senseless acts of terror and attended far too many funerals and shivas.  But along with the sense of sadness and frustration and the anger that these terrible events bring about, what also emerges is a feeling of fortified resolve that the examples of bravery and determination in the face of adversity bring to mind. So, in the presence of many of those here who are deeply in pain but also displaying this admirable resolve and dignity, those of us who have come to comfort leave stronger people ourselves.

The efforts of AACI to memorialize fallen friends and countrymen with such appropriate respect and honor is a great act of chesed. The strength of AACI’s dedication and the importance of its role within Israeli society is evident from the very special group of people gathered here today for this ceremony, including, I should add, the younger members of our community here today, the torchbearers of the values and standards that Israel and the United States hold dear. These young people are the embodiment of our joint vision of the future. I am always proud to stand with this special assembly and to give honor to those whose names will be remembered forever.

In this time between Rosh Hashana and Yom Kippur, it is a time of reflection and renewal; it is a period that encourages us all to choose life.  The words of the prophet Yirmiahu can give us strength and optimism during this time:

“For I know the plans I have for you,” declares the LORD, “plans for you to prosper and not to be harmed, plans to give you hope and a future.”

The secret of Israel’s success, it seems to me, and the secret of the Jewish people is, even in the face of tragedy and the need to remember those who have fallen, is never to give up on hope and on the future. Yehi zichram barouch.  I wish all of you G’mar Chatima Tova.