Home الصفحة الرئيسية / News & Events / Op-Ed: A year after opening the Jerusalem Embassy: On the right side of history 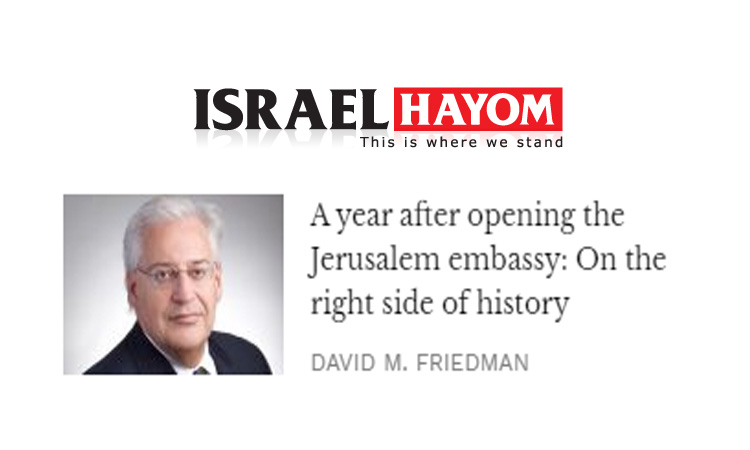 Read the op-ed Ambassador David Friedman wrote for ‘Israel Hayom’ ahead of the first anniversary of the U.S. Embassy move to Jerusalem

Contrary to all the negative predictions, the Jerusalem embassy has been an extraordinary success, advancing peaceful coexistence, bilateral cooperation and cultural exchange between and among Israelis, Palestinians and Americans.

America has been fascinated by Jerusalem since the early days of our republic. In 1844, Warder Cresson, the first consul general, announced after his appointment by the secretary of state that the United States was thereby extending its protection to the Jews of Jerusalem. The first permanent consular presence opened just inside the Jaffa Gate in 1857, and diplomatic presence has remained constant in and around the Old City ever since. President Abraham Lincoln, just before his death, told his wife how he longed to visit Jerusalem. And President Ulysses Grant and Mark Twain both visited Jerusalem in the mid-19th century and wrote extensively about their experiences.

Neither Grant nor Twain were all that impressed with Jerusalem in those days. It was poor, inhospitable and undeveloped. The Old City of Jerusalem remained that way well into the 20th century, whether under the rule of the Ottoman Empire until 1917, the British Mandate until 1948, or the Kingdom of Jordan until 1967.

In 1967, Jerusalem was reunified as a single city under Israeli rule. Almost immediately, Jerusalem began to bloom, to flourish and to become, for the first time in its history, a free city open to the worshipers of all three Abrahamic faiths. Many in the United States took notice and, in 1995, Congress, by overwhelming majority votes, passed the Jerusalem Embassy Act, recognizing Jerusalem as the capital of the State of Israel and requiring the relocation of the U.S. Embassy from Tel Aviv to Jerusalem.

Presidents Bill Clinton, George W. Bush and Barack Obama all found reasons to avoid the implementation of this law. All in all, more than 40 presidential waivers were signed delaying the move of the Embassy. And then came President Trump.

Trump recognized the truth – that Jerusalem was, is and will always be the capital of Israel. He saw the dishonest and shameful efforts of UNESCO and the United Nations Security Council to deny Israel’s biblical, historical and practical connection to Jerusalem. And he refused to pursue a foreign policy based upon anything short of the truth. President Trump, like other Republican and Democratic candidates before him, had promised during his campaign to move the Embassy. Unlike his predecessors, Trump kept his promise.

The United States Embassy in Jerusalem has now been open a full year. We have a beautiful campus in the Arnona suburb and magnificent facilities on Agron Street in downtown Jerusalem. Well more than 100 American diplomats come to work every day, working hand in hand with Israelis and Palestinians, and American and foreign tourists visit every day just to take a picture or say a prayer. Contrary to all the negative predictions, the Jerusalem embassy has been an extraordinary success, advancing peaceful coexistence, bilateral cooperation and cultural exchange between and among Israelis, Palestinians and Americans.