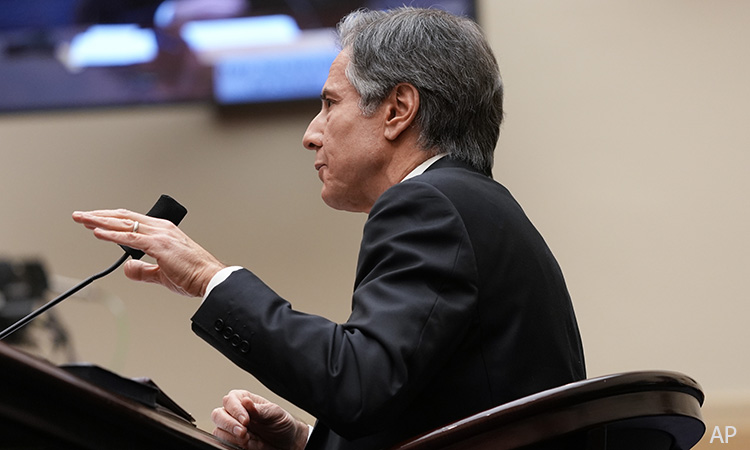 Secretary of State Antony Blinken testifies before the House Committee on Foreign Affairs on the administration foreign policy priorities on Capitol Hill on Wednesday, March 10, 2021, in Washington. (Ken Cedeno/Pool via AP)

SECRETARY BLINKEN: Mr. Chairman, Ranking Member McCaul, thank you so much for your warm welcome. It’s very, very good to be back before this committee, to be back in this room. And I really do appreciate the opportunity to talk today about the foreign policy goals and priorities of the Biden-Harris administration and some of the early work that we’ve done to try to achieve them.

As I have said before, I am committed to working with Congress – on the takeoff, and not just the landing. I hope the administration’s recommitment to working with you will usher in a new era of trust, cooperation, and understanding between the Executive and Legislative branches. And I come to this because I work for a president who believes deeply in it; and having had the experience of working in that lesser body down the street on the Foreign Relations Committee, it’s something that I feel personally myself.

The Biden-Harris administration has set out foreign policy priorities by asking a simple question, and it’s one that motivates us every single day: What will this policy mean for American workers and American families?

And with that in mind, we set out the following priorities.

Stopping COVID-19 and strengthening global health security, so a crisis like this never happens again.

Building a more stable and inclusive global economy that delivers security and opportunity for as many Americans as possible.

Renewing democracy at home and abroad, because strong democracies are more stable, more open, more committed to human rights, less prone to conflict, and a more dependable market for our goods and services.

Working to create a humane and effective immigration system, because strong borders are fundamental to our national security and welcoming immigrants is core to our national identity.

Revitalizing our ties with allies and partners, because these relationships really are force multipliers and a unique asset to the United States.

Tackling the climate crisis and driving a green energy revolution, because effectively dealing with climate change is essential to the health of our people, our economy, our security, and our planet.

Securing our leadership in technology, because it’s critical to thriving in the global economy – and because we need to strengthen our defenses against bad actors.

And managing our relationship with China, the biggest geopolitical test of the 21st century.

With those priorities in mind, here are some of the actions we’ve taken in the first 50 days of this administration.

On COVID-19: We re-engaged the World Health Organization and contributed an initial $2 billion to COVAX, the global vaccination initiative.

On climate: We rejoined the Paris Agreement and announced a Climate Leaders Summit, which will be held on Earth Day, April 22nd.

On our allies and partners: We held the first ministerial meeting of the Quadrilateral Security Dialogue between us, Japan, Australia, and India, and we will hold a leader-level summit this week on Friday. We halted any planned troop withdrawals from Germany pending a Global Posture Review led by the Pentagon. And I took my first virtual trip as Secretary to Canada and to Mexico, and next week, Secretary Austin and I will travel to Japan and to South Korea.

On immigration: We overturned the discriminatory Muslim and Africa travel bans. We rescinded the zero tolerance Executive Order on migrant family separation. And we sent the U.S. Citizenship Act of 2021 to the Hill to modernize our immigration system.

On refugees and asylum policies: We rescinded harmful executive orders on refugee resettlement and announced a new refugee admissions target of 125,000 people for Fiscal Year 2022. We suspended the Asylum Cooperative Agreements with the governments of El Salvador, Honduras, and Guatemala. We reinstated Deferred Enforced Departure to Liberians and granted temporary protected status to Venezuelans already in the United States.

On democracy and human rights: We joined the UN Human Rights Council as an observer. We put into effect the presidential proclamation that U.S. diplomacy protect the human rights of LGBTQI people worldwide. We released the Khashoggi report and announced the Khashoggi Ban to stop people who engaged in serious, extraterritorial counter-dissident activities on behalf of a foreign government from entering our country. We imposed Russia sanctions on Alexei Navalny’s poisoning and detention. And we imposed sanctions in response to the military coup in Burma.

On public health: We rescinded the Mexico City Policy, prioritizing sexual and reproductive health, including funding for the UN Population Fund.

On nonproliferation: We extended the New START Treaty with Russia for five years and relaunched diplomacy with our closest European allies to bring Iran back into compliance with the JCPOA.

On conflict diplomacy: We suspended the sale of offensive weapons to Saudi Arabia and named a special envoy to lead diplomatic efforts to end the war in Yemen. We revoked designations of Houthis as a Foreign Terrorist Organization to enable urgent assistance to the world’s most challenged people when it comes to the humanitarian crisis they’re facing. And we boosted diplomatic efforts in Afghanistan ahead of the May 1st deadline.

And on strengthening the State Department: We’ve invested in diversity and inclusion to have a diplomatic workforce that reflects the diversity of our country. We’re focused on accountability and transparency. And we will modernize and rebuild, so our team around the world has the tools and the support they need to get the job done.

So, as you can see, many of these steps map directly onto our core priorities. We can draw a line from each one of them and draw a line further to the security, prosperity, and well-being of our fellow citizens.

The President has made it clear that we will lead with diplomacy, because it’s the best way to deal with today’s challenges.

Above all, we are determined to hold ourselves accountable to a single, overarching measure of success: Are we delivering results for the American people?

That’s our mission. It’s our opportunity. We’ll try to do our best to make the most of it.

Thank you very much. I’m very glad to be here, and I look forward to getting your questions.