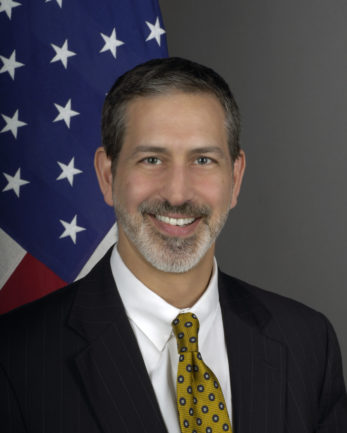 Jonathan Shrier assumed his position as the Deputy Chief of Mission for the U.S. Embassy in Jerusalem in October 2019.  A career member of the U.S. Senior Foreign Service, he most recently served in Peshawar, Pakistan, as the Consul General and Principal Officer.  He previously served in Israel as the Counselor for Economic Affairs, contributing to an expansion in bilateral trade and investment and to breakthroughs aimed at improving economic conditions for Palestinians.  Previously, he served in Kabul, Afghanistan, as the Senior Deputy Coordinating Director, overseeing ten State Department and other agency units delivering more than $8 billion in assistance and technical cooperation to support the U.S. partnership with Afghanistan.

Earlier, Mr. Shrier was the Secretary of State’s Special Representative for Global Food Security (acting), coordinating all aspects of U.S. diplomacy related to food security and nutrition and co-leading Feed the Future, the U.S. government’s global hunger and food security initiative.  Mr. Shrier has also worked on the Secretary of State’s Policy Planning Staff; served as the Principal Deputy Assistant Secretary and Acting Assistant Secretary for Policy and International Affairs at the U.S. Department of Energy; coordinated international energy policy as the National Security Council and National Economic Council; advised the Under Secretary of State for Economic, Business, and Agricultural Affairs; directed investment affairs at the Office of the U.S. Trade Representative; and served at the U.S. Embassies in Beijing, China, and in Riyadh, Saudi Arabia.