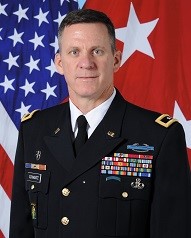 U.S. Security Coordinator for Israel and the Palestinian Authority, Jerusalem

He is a graduate of the Navy War College, Newport, RI and the Command and General Staff College, Leavenworth, KS.

LTG Schwartz is a native of Colorado.  He attended Idaho State University, Pocatello ID majoring in Finance and was commissioned an Armor second lieutenant in December 1987 through ROTC.