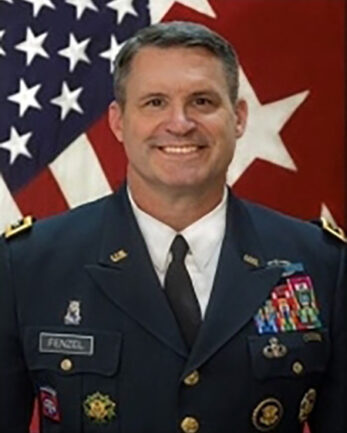 Lieutenant General (LTG) Michael R. Fenzel assumed his position as the United States Security Coordinator for Israel and the Palestinian Authority in November 2021. Prior to his arrival in Jerusalem, he served as Vice Director for Strategy on the Joint Staff in the Pentagon and previously as Military Deputy to the Special Envoy for Afghanistan Reconciliation at the U.S. Department of State. LTG Fenzel has also served as Director of Strategy for U.S. Forces Afghanistan and NATO’s Resolute Support Mission after holding positions as Deputy Commanding General, Chief of Staff, and Brigade Commander in the 82nd Airborne Division. LTG Fenzel received his Ph.D. in Security Studies from the U.S. Naval Postgraduate School, advanced degrees from the Naval War College and Harvard University, and earned a B.A. in Economics from Johns Hopkins University, where he was also commissioned as an Infantry Officer in the U.S. Army in 1989. He is a White House Fellow, Asia Society Fellow, Johns Hopkins University Leadership Fellow, and a Life Member at the Council on Foreign Relations.
LTG Fenzel is married to Lisa Campeau-Fenzel who is from Montreal. They have four children.