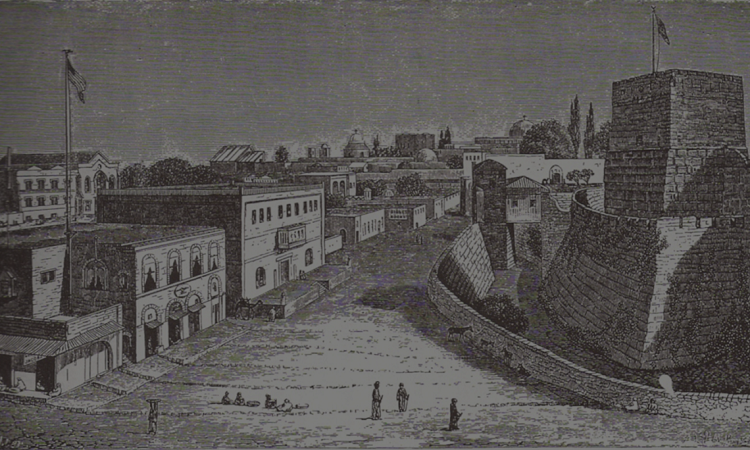 The American diplomatic presence in Jerusalem has been unbroken since 1857.  J. Warren Gorham, a Boston physician, was appointed by President Franklin Pierce as the U.S. Consul in Jerusalem, then a city within the Ottoman Empire.  (An earlier attempt to designate an American Consul, in 1844, proved unsuccessful, the appointment being cancelled by the Secretary of State as the candidate was sailing to Jerusalem.)

On March 25, 1857, Dr. Gorham took up his duties, having received from the Ottomans an exequatur, or formal diplomatic credentialling of his Mission as a Consulate dependent on the American Legation in Constantinople.

The original home of the U.S. Consulate was a sizeable building in the Old City, just inside the Jaffa Gate.  The engraving shown here (1882) depicts the building on the left, opposite the Tower of David, with the American flag flying over it.

This building still stands – now as the Swedish Christian Study Centre – but the headquarters of the Consulate has moved twice.  In the late nineteenth century it was located north of the Old City on Prophets’ Street.  And in 1912, the United States government leased a villa to the west of the Old City on Mamilla Road, later renamed Agron Road, and relocated the headquarters of the Consulate and the Consul General’s residence there. Both remained in that location until March 4, 2019, when the U.S. Consulate General was merged into the U.S. Embassy to Israel, which had relocated its headquarters to number 14 David Flusser Street in Jerusalem on May 14, 2018. The villa on Agron Road – along with the neighboring Lazarist monastery described below – is now one of several properties that make up the U.S. Embassy in Jerusalem and houses the Palestinian Affairs Unit, among other Embassy offices.

The villa – now number 18 Agron Road – was one of the first substantial houses built outside the Old City as modern Jerusalem expanded outside the city walls.  It was erected in 1868 by Ferdinand Vester, a German Lutheran missionary: a handsome two-storied house of pinkish “Jerusalem stone.”  This limestone is the material used in almost all the historic architecture in the city, and a large part of the beauty of Jerusalem comes from its luminous, uniform stonework.  As for Vester’s villa, it was low and wide, with five arched windows along the front, a large balcony over a portico, and an arched entranceway.  It was, and is still, surrounded by a large, magnificent garden.  A third floor was added early in the twentieth century.  The U.S. State Department bought the property outright in the 1930s, and it has been substantially remodeled throughout its over 100 years housing a U.S. diplomatic presence. 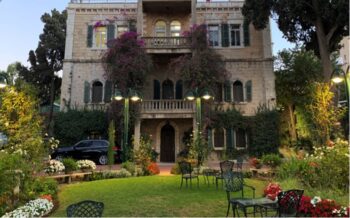 British rule succeeded Turkish rule of Jerusalem in December 1917, and for the next three decades the U.S. Consulate was accredited by the British Mandate for Palestine. The Consulate later leased an additional facility on Nablus Road, north of Damascus Gate, as an annex to its main offices on Agron Road. That facility housed the Consulate’s U.S. Information Service and Public Diplomacy section until 2006, and its Visa and American Citizen Services section until 2008, when those sections moved to other Consulate facilities. It is now a Public Diplomacy programming space known as “America House Jerusalem.”

After the founding of the State of Israel, the U.S. established its Embassy to Israel in Tel Aviv, while the U.S. Consulate General remained on Agron Road. The Consulate continued to function as an independent mission focused on U.S. diplomatic interests and services to American citizens in that unique city, Jerusalem, among other duties. While Jerusalem was divided from 1948 to 1967, American diplomats crossed the Green Line daily between the Consulate’s headquarters in the Israeli-controlled half of the city on Agron Road to its annex on Nablus Road in the Jordanian-controlled half to conduct their work.

In 2006, the U.S. Consulate General in Jerusalem expanded its presence eastward along Agron Road, leasing the monastery of the Congregation of the Mission, the Lazarists (also known as the Vincentians), at number 20.  This monastery dates from 1866, and is the work of architect Conrad Schick, who is responsible for some of the most magnificent nineteenth-century architecture in Jerusalem.  It has a plain but impressive symmetrical façade of Jerusalem stone, pink trimmed with white.  The monastery still houses a small group of Lazarist Fathers in a part of the building separate from the Embassy offices located there now.

The Consulate leased and constructed other facilities in Jerusalem as its workload and staffing increased over time, including facilities in Arnona and Talpiyot. When the Consulate General was merged into the U.S. Embassy to Israel in 2018, all of these facilities and the offices they housed became part of the Embassy.