From the UN in New York to Model UN in Israel

U.S. Permanent Representative to the UN, Ambassador Samantha Power, concluded a four day visit to Israel this week, aimed at discussing a range of regional and bilateral issues. During her visit, Ambassador Power tour Yad Vashem Holocaust Museum, met with Israeli Prime Minister Netanyahu, President Rivlin, Minister of Defense Ya’alon, and former Israeli President Peres. She also visited the bilingual Hand in Hand school and played a friendly game of basketball with Jewish and Arab children. In the evening, Ambassador Power addressed Israeli high school students at the Israel Middle East Model UN Conference. On her last day, Ambassador Power took a helicopter flight over Central Israel, observed the transfer of goods from Israel to the Gaza Strip through the Kerem Shalom border crossing, and ended her visit with a visit to Kibbutz Nahal Oz, where she heard from local residents about the difficulties of living so close to the Gaza Strip, and the hope for peace and stability in the region.

U.S. Ambassador to the United Nations Samantha Power remarks at the Israel Middle East Model UN Conference at the American International School in Even Yehuda 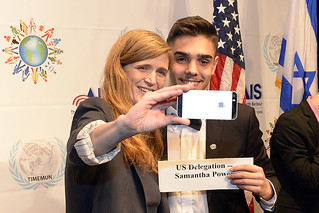