Today, U.S. Ambassador to Israel Tom Nides visited the port city of Haifa to engage with local leaders and various communities.
During his one-day visit to the city, Ambassador Nides met with Haifa Mayor Einat Kalisch Rotem and underscored the strong bond between the United States and Israel.  The visit to Haifa also included a series of meetings with local leaders in the fields of economy and education.  The Ambassador visited the headquarters of Takwin Venture Capital and met with founders of two start-up companies.  He also paid a visit to the Technion, where he engaged with senior leadership of the institution.

Ambassador Nides’ trip to Haifa also included stops at major Haifa landmarks, such as the Baha’i Gardens and the new Haifa Cable Car.  At the end of the visit, the Ambassador had the opportunity to sit down with a group of local influencers for a frank and honest discussion to get their perspective on the current issues in their city.

“I’ve had a chance to see some of the amazing diversity of this beautiful city,” said Ambassador Nides. “I cannot imagine a better place to inaugurate our new regional travel program my staff is calling ‘Talks with Tom’ to connect the U.S. Embassy more closely to diverse communities in Israel.” 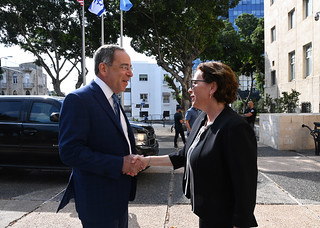