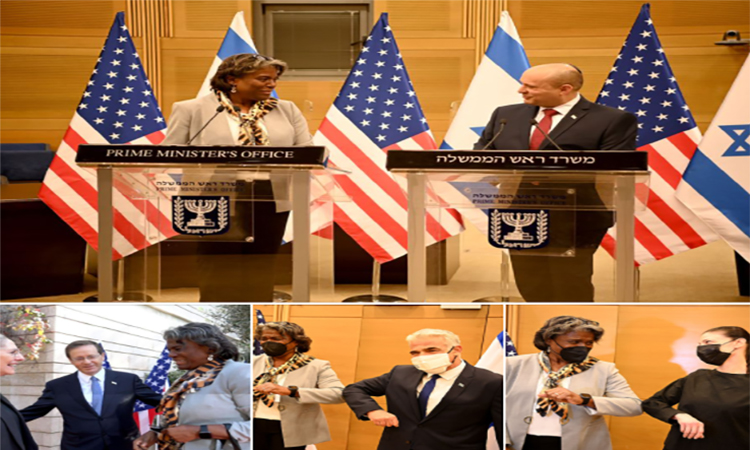 Office of Press and Public Diplomacy

The below is attributable to U.S. Mission to the United Nations Spokesperson Olivia Dalton:

During her meeting with Prime Minister Bennett, the two officials discussed the deep and enduring ties between the U.S. and Israel, our shared commitment to battle anti-Israel bias at the UN, and Iranian aggression in the region.  Ambassador Thomas-Greenfield reiterated President Biden’s pledge that Iran will not be allowed to develop a nuclear weapon. She also applauded Israel’s donations of COVID vaccines, highlighted our nations’ commitment to addressing climate change, and discussed mutual values of promoting diversity and inclusion in society.

In her meeting with President Herzog, Ambassador Thomas-Greenfield expressed appreciation for his work to improve intercommunal relations in Israel. The two leaders discussed the United States and Israel’s shared commitment to combating anti-Semitism and promoting Holocaust education globally, including through the UN system.

In her meeting with Foreign Minister Lapid, Ambassador Thomas-Greenfield reaffirmed the Biden-Harris Administration’s commitment to strengthening and supporting the Abraham Accords and normalization agreements.  She reiterated the U.S. position on preserving a two-state solution in which Israel lives in peace and security alongside a viable and democratic Palestinian state and discussed practical steps to reduce tensions.

Ambassador Thomas-Greenfield and Transportation Minister Merav Michaeli discussed the role of women leaders and ways to promote diversity and inclusion in society, including the Israeli Gender Equality Ministerial Committee and UN Security Council Resolution 1325 on women, peace, and security.  Ambassador Thomas-Greenfield discussed how integral infrastructure is to strengthening national security and advancing shared global priorities, including tackling the climate crisis and furthering economic development, and noted President Biden’s signing today of the Infrastructure Investment and Jobs Act. They also discussed the challenge posed by China and other authoritarian states.

In each of her meetings with Israeli officials, Ambassador Thomas-Greenfield underscored that Israelis and Palestinians alike deserve equal measures of freedom, security, and prosperity.  This is important in its own right and as a means to advance prospects for a two-state solution.

QUESTION:  Can you give us an update on Rob Malley’s trip to the Middle East, how he’s using that specifically to prepare for the resumption of talks?  And is he going to come back here before then or go straight to Vienna?

MR PRICE:  Sure.  Well, Special Envoy Malley, as we announced last week, has been on a trip to consult with our partners in the region.  He was in the UAE.  He is now in Israel, where he has had excellent engagements.  He’s met with Israel’s foreign minister, the defense minister, the national security advisor, the director of the Mossad, among other Israeli counterparts.  We have made a point of saying when it comes to our Israeli partners, when it comes to our Gulf partners, that we have regularly – during the course of the previous six rounds of indirect negotiations in Vienna have regularly briefed them on the course of those discussions.  And as we prepare for the resumption of those talks, the seventh round in Vienna, this is an opportunity to compare notes and to prepare for that seventh round.  But that close consultation and coordination will continue as we get closer to November 29th and of course once those negotiations resume.

QUESTION:  Can I have a follow-up on that?

QUESTION:  Given that Ambassador Linda Thomas-Greenfield is also there, is she involved in those discussions with Malley regarding Iran and Israel?

MR PRICE:  My understanding is that the ambassador, Ambassador Thomas-Greenfield, has a broader agenda while she’s there.  Of course, Special Envoy Malley is squarely focused on the issue of Iran and the possibility of a mutual return to compliance, so those have been fairly a set of narrow discussions.

The full text can be found here.