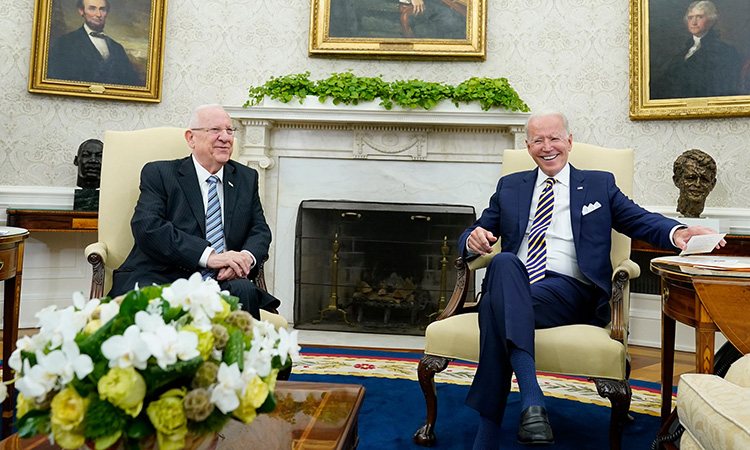 President Joseph R. Biden, Jr. met today with President Reuven Rivlin of Israel to honor President Rivlin as he approaches the conclusion of his term and to demonstrate the enduring strength of the U.S.-Israel partnership. President Biden conveyed his unwavering support for Israel’s security and his commitment to deepening the cooperation between the two countries across all fields. The leaders discussed the many challenges facing the region, including the threat posed by Iran. The President emphasized that under his administration, Iran will never get a nuclear weapon. He also assured President Rivlin that the United States remains determined to counter Iran’s malign activity and support for terrorist proxies, which have destabilizing consequences for the region.

The leaders also consulted on opportunities to enhance peace and stability in the Middle East and beyond. In that regard, the President expressed his strong support for the normalization of relations between Israel and other countries in the Arab and Muslim world.

The leaders also discussed recent developments in Gaza and the West Bank and the President emphasized the importance of Israel taking steps to ensure calm, stability, and to support greater economic opportunities for the Palestinian people. President Biden affirmed his view that a negotiated two-state solution remains the best avenue to achieving a lasting peace. The leaders discussed the importance of enhancing efforts to strengthen moderate voices and promote the cause of coexistence while weakening extremists who advocate for hatred and violence.

The President warmly extended an invitation for Prime Minister Naftali Bennett to meet with him soon at the White House and reaffirmed that this administration looks forward to close collaboration with the new Israeli government on the many important issues on the bilateral agenda.