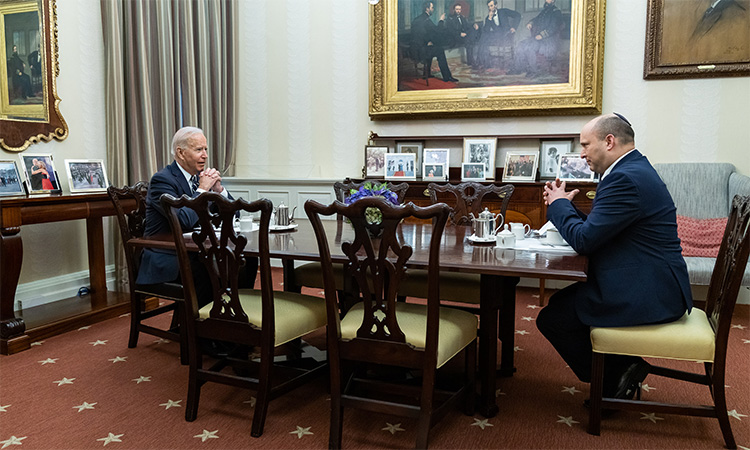 President Joseph R. Biden, Jr. met today at the White House with Prime Minister Naftali Bennett of Israel to reaffirm the historic partnership between the United States and Israel and consult on the full range of global and regional challenges facing the two countries. The President expressed appreciation for Israel’s condolences for yesterday’s attack in Kabul that killed U.S. service members and Afghan civilians.

The President conveyed his ironclad support for Israel’s security and right to self-defense. As part of this extraordinary bilateral defense and security cooperation, the President underscored his administration’s full support for replenishing Israel’s Iron Dome system.

The leaders discussed the most critical challenges facing the Middle East, including the threat posed by Iran. The President made clear his commitment to ensure Iran never develops a nuclear weapon. The leaders reviewed steps to deter and contain Iran’s dangerous regional behavior. They reiterated their commitments to work constructively and deepen cooperation to address all aspects of Israel’s security against Iran and other threats.

The President and Prime Minister Bennett shared their perspectives on the unprecedented challenges presented by the COVID-19 pandemic, both at home and around the world, and agreed that their respective teams would remain closely engaged to share expertise on this urgent global challenge.

The President expressed his full support for strong and expanding relations among Israel, its Arab neighbors, and Muslim states globally. The two leaders noted that Israel’s historic partnerships with Egypt and Jordan remain crucial to regional stability. They discussed ways to further deepen Israel’s relationships with Bahrain, Morocco, Sudan, and the United Arab Emirates, and their goal of identifying new opportunities to expand such partnerships.

The President and Prime Minister Bennett also exchanged views on efforts to advance peace, security, and prosperity for both Israelis and Palestinians. The President underscored the importance of steps to improve the lives of Palestinians and support greater economic opportunities for them. He also noted the importance of refraining from actions that could exacerbate tensions, contribute to a sense of unfairness, and undermine efforts to build trust. President Biden reaffirmed his view that a negotiated two-state solution is the only viable path to achieving a lasting resolution to the Israeli-Palestinian conflict.

President Biden also emphasized that his administration would strengthen bilateral cooperation with Israel in ways that would benefit both U.S. citizens and Israeli citizens, including by working together towards Israel’s inclusion in the Visa Waiver Program. The leaders directed their teams to enhance consultations as Israel works on addressing the program’s requirements.

It was an honor to welcome Israeli Prime Minister Naftali Bennett to the White House today. We strengthened the enduring partnership between our two nations and underscored the United States’ unwavering commitment to Israel’s security. pic.twitter.com/nZYxp9zsWd