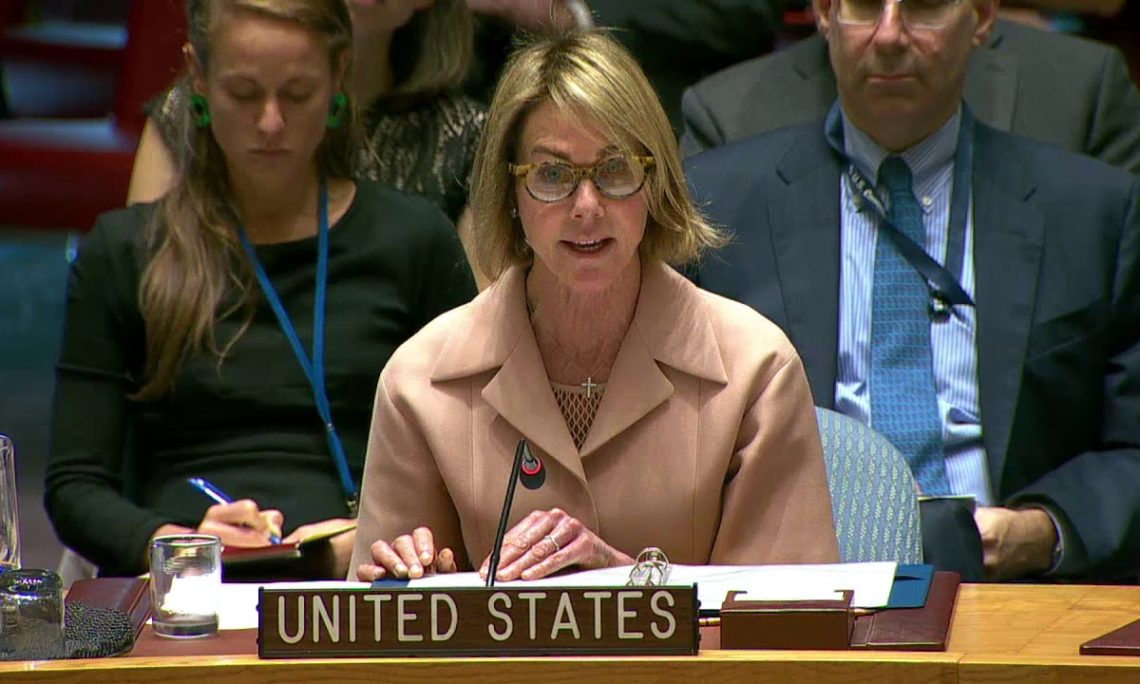 As you know, this is my first time participating in this monthly briefing. With this in mind, I would like to step back for a moment and speak broadly on how I intend to approach issues related to the State of Israel.

First—I believe it is important to be clear on serious matters. So, allow me to be clear on the relationship between the State of Israel and the United States of America.

Unfortunately, on matters related to Israel at the United Nations, many Member States do not play fair. I could speak endlessly about Member States’ excessive attention to the affairs of Israel, including complaints, unwarranted criticism, and the incessant number of resolutions condemning this great nation.

However, I do not wish to dwell on these well-worn points. As a person who finds value in emphasizing the positive, I wish to instead highlight Israel’s astonishing record of achievements.

Since its creation, Israel has served as a refuge and sanctuary for those fleeing persecution and repression. A vibrant and accomplished democracy, Israel has stood tall and steadfast, despite constant threats to its peace and security.

All the more impressive is that in this threatening environment, Israel strongly supports press freedom, defends gender equality, and houses a robust and innovative free-market economy. And in opposition as to what has been stated here, a nation that deeply respects the rule of law. Indeed, we have much to learn from her.

Further, as a hub for innovation, Israel has cultivated and earned its reputation as a startup nation. It is a global leader in research and development and has a vast network of international collaboration in this space. In fact, it is a leading investor in research and development as a percent of GDP and has been home to 5000 new startups in the past 10 years alone.

Much like the way they built their great nation, Israelis have used their spirit of courage, faith in education, and dogged determination to help their brothers and sisters around the globe.

There are many nations eager to condemn Israel that should instead study its resolve, study its constant efforts towards making the country stand as first among equals to any of the modern world, and study its benevolent pursuits in arts and sciences. In doing so, I believe a different picture will emerge—one that showcases all that Israel is and all that the world can gain from this great nation.

Please do not mistake my remarks here—my statement is not meant to indicate that other issues discussed here today, including the continued violence and terror from Hamas in Gaza as described by Mr. Mladenov in his briefing, are not important.

However, as we sit in this building that was created as a Hall of Peace, I believe it critically important that we acknowledge that no country should face the ceaseless barrage of unwarranted criticism, one-sided antagonism, or repeated negative spotlight.

The United States remains tirelessly committed to supporting Israel’s fair treatment here in this body as well as the UN system.

Further, it should come as no surprise that this is one of my chief priorities. The United States stands with our close friend and partner and will continue to oppose actions and statements that unfairly single it out. And as the Representative of the United States to the UN, I will work relentlessly to fight every effort that seeks to delegitimize Israel or undermine its security.

It is inexcusable that pervasive, anti-Israel bias still exists in the United Nations, and that we continue to witness attempts by some UN Member States to undermine Israel’s standing as a full member of the community of nations. The United States vigorously opposes all such efforts.

As I said when opening my remarks, I believe it is very important that I am clear on serious matters. So allow me to be clear on the relationship between the State of Israel and the United States of America once again.

Israel will have no better friend than Kelly Craft.