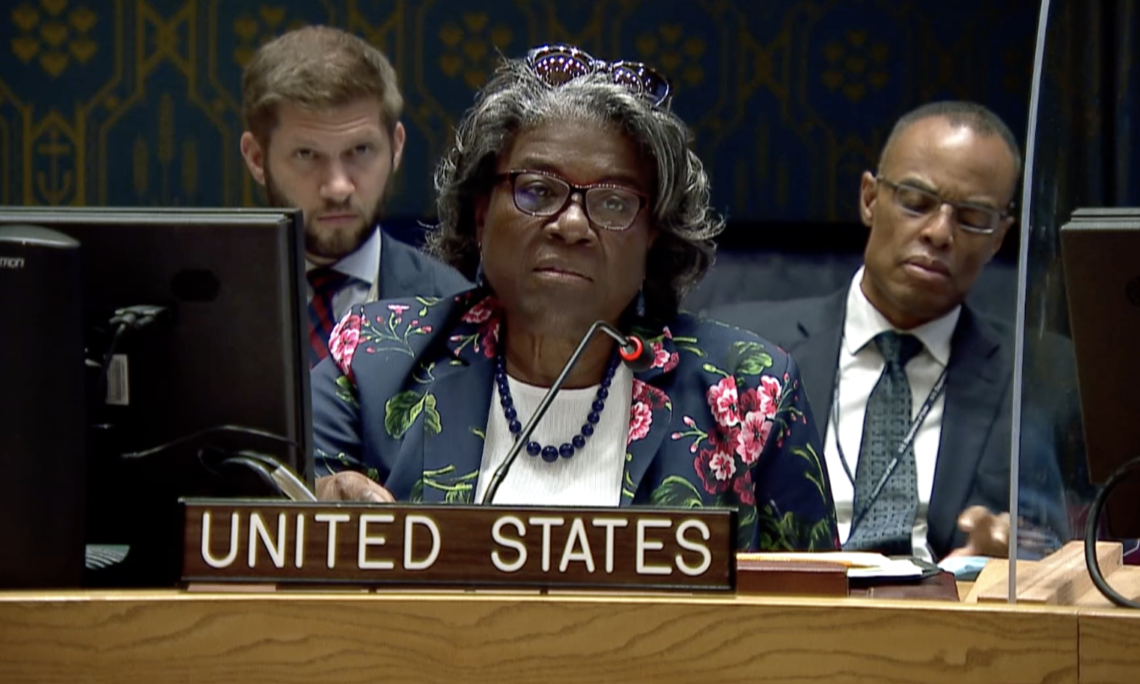 The United States welcomes the ceasefire that was reached last night. Thank you to Special Envoy Wennesland, to Egypt, Qatar, Jordan, and other regional partners for facilitating an end to recent hostilities. We call upon all parties to fully implement the ceasefire, including the consistent delivery of fuel shipments to Gaza to ensure hospitals and other public services can operate.

We are deeply saddened by reports of civilian casualties and need to swiftly and thoroughly investigate each of them. We should refrain from jumping to conclusions until we can determine the facts. As just one example, Israel was originally blamed for an attack that inflicted civilian casualties in Jabaliya refugee camp. It now appears to have been caused by a Palestinian Islamic Jihad rocket. So let us be sure to follow the facts and see where they lead us.

We are, of course, also concerned by the humanitarian impact of the recent violence. Residents of Gaza have received less access to electricity at one of the hottest times of the year. Medical facilities and other public services were shuttered. The resumption of fuel deliveries today comes not a moment too soon.

Speaking more broadly, our position is clear to everyone in this room. We fully support Israel’s right to defend its people against terrorist threats, including from rocket fire aimed at civilians or without regard to them. We also believe that Israelis and Palestinians equally deserve to live in safety and security – and we are working assiduously toward that end.

The United States will remain engaged with senior Israeli officials and Palestinian leadership in the days ahead to continue implementing many new initiatives President Biden has launched to improve the quality of life for Palestinians.

But let us be clear: Palestinian Islamic Jihad is a designated terrorist organization in the United States and in many other nations. And it is also an Iranian proxy group, which has conducted attacks against innocent civilians for years. It is telling that Palestinian Islamic Jihad leaders were in Tehran the last several days while the people they claim to be protecting were left in harm’s way.

I would also note that it was the Palestinian Islamic Jihad, not Israel, that held up agreement on a ceasefire designated to save lives and resume shipments into Gaza, callously prolonging these hostilities. We commend Prime Minister Lapid for his leadership, which ultimately prevented further casualties and suffering.

This Council should be able to come together and unconditionally repudiate the terrorism of Palestinian Islamic Jihad, whose reckless actions have put the lives of civilians, on both sides, at risk. Their actions must be condemned by all countries in no uncertain terms. And no country should be expected to tolerate or passively accept such brazen attacks on its civilians.

Even as this conflict in Gaza brings new lists of families devastated by loss, we recall that two Israeli civilians remain held in Gaza along with the remains of two Israeli soldiers killed in action in a previous conflict. Every family – irrespective of nationality, religion, or creed – deserves to bury their loved ones in a dignified and unimpeded manner.

We hope that the ceasefire holds. And we will continue working to prevent further violence. And we all know that the best way to achieve lasting peace is through a comprehensive solution to the Israeli-Palestinian conflict. As President Biden affirmed during his visit to the region in July, the United States remains deeply committed to a two-state solution.

To that end, we strongly urge all parties to refrain from any unilateral steps that would imperil progress. Building towards a durable solution means refraining from provocative actions, rhetoric, and other measures that would disrupt respect for the historic status quo at holy sites in Jerusalem.

We call on all Member States to join us in supporting steps that can stabilize the situation on the ground, deliver economic benefits to the Palestinian people, and revitalize political horizons that meets the needs of both Israelis and Palestinians.