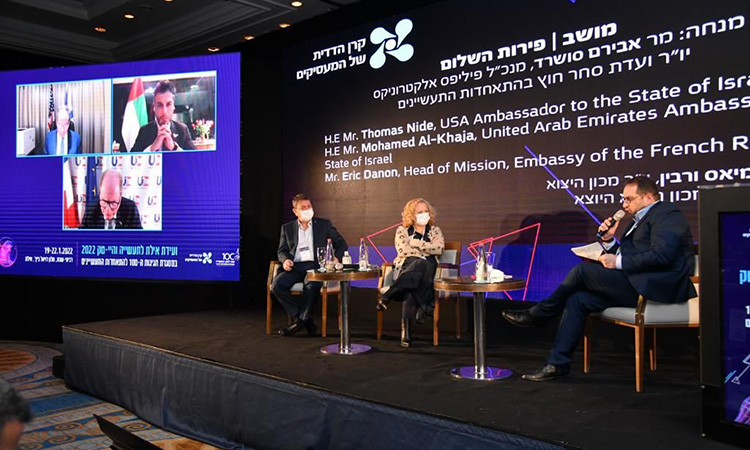 Remarks by Ambassador Thomas Nides at the 2022 Manufacturer’s Association of Israel Conference on Industry and High-Tech, Panel on the “Fruits of Peace”

Aviram Suchard: First question to his Excellency Ambassador Thomas Nides.  Good evening and thank you for joining us.  The Biden Administration has committed to further advancing the Abraham Accords and it is rumored that Indonesia and Saudi Arabia are considering normalizing relations with Israel.  What is the Biden Administration doing to increase Israeli normalization with Muslim majority nations?

Ambassador Nides: Well, first of all, thank you all very much for having me and I’m honored to be participating.  Obviously, I don’t think any of us would prefer to be at home.  I think all of us

But unfortunately, COVID has created this scenario for all of us.  But I’m honored to be here.  I’ve been at the post for about six weeks, so I’m one of the newest of the bunch here, but I want to make a couple quick intro comments.

Number one, I’m honored to be on the stage with my friend Mohamed from the UAE.  And obviously, Eric, you and I don’t really know each other, but I’ve spent a lot of time with Mohammed.

But I will be clear: the Abraham Accords would not have happened without the leadership of the Emiratis.  And one of the people who was very instrumental in all this was obviously Yousef Al Otaiba who is actually the UAE ambassador to the United States.  And is a good friend of Mohammed’s and very important to the government.  And I just want to recognize the importance that the Emiratis have played in this journey.

Number two, when I was confirmed just a few weeks ago in the United States, I was testifying in the U.S. Senate.  And in my confirmation, I made it very clear that the Biden administration is fully and completely committed to the Abraham Accords.  Yes, the Abraham Accords, and are focused on increasing the involvement of the countries that are currently signed on.

And I think the focus on the countries that are currently quote “signed on”, including Egypt and Jordan, I think it’s imperative that all of us folks focus on doing more transactions, more deals, more opportunities with those countries right now.  And I feel like that is my job to do with my friends in the Abraham Accords.

And I think one of the real goals here is to make the people to people exchanges, the business transactions, and really solidify this for the long-term.  That’s why obviously where I’m focused.

On the question of what comes next.  You know, obviously, there’s going to be lots of opportunities to what comes next.  Personally, I focus on what we have today.  I mean, the White House, and the State Department focus on quote “next countries” and hopefully there will be many, many more to come.  But I think it’s imperative for all of us not to lose sight of what we already have and make those solid and before we chase the next one.  But I think ultimately we’ll be doing that as well simultaneously.

Aviram Suchard: Thank you very much. […] Another question for Ambassador Nides. What kind of new and other business opportunities have opened in the Israel-U.S. relations?

Ambassador Nides: Listen, the good news here is there is no lack of opportunity between Israel and the United States. You know, we’re the largest single trading partner.  50 billion dollars in trade.  It’s everything from technology, to energy, to science, to education, to hard goods.

This relationship, as Joe Biden has said, is unbreakable on every level – on national security, economics, emotional.  The emotional attachment from Joe Biden and the United States of America – both Democrats and Republicans – this is not a partisan issue, is an emotional connection to the State of Israel.

I’ve had the honor since I’ve been here to spend an enormous amount of time with Prime Minister Bennett, Foreign Minister Lapid, and basically the whole cabinet.  And first of all, I want to congratulate the Prime Minister and the Foreign Minister for putting this coalition together.  It is, to me, beyond anyone’s comprehension of what could be done when you really try.

I mean you have a coalition from [Prime Minister] Bennett to Minister Shaked to Mansour Abbas and everything in between.  It’s remarkable.  And that bond – of this kind of coalition working with the United States – is unbreakable.  So the reality of this is, the relationship is quite remarkable.

There’s a list, of February, it’s remarkable.  I mean, I can’t tell you, about every single CEO, big company, small company, private equity, technology.  And then, of course, you know, all my Jewish friends who work with every Jewish organization in the world, want to come here.

I just I do not worry about opportunities.  I just worry about making sure we work closely together and get the benefit for everybody.

And I, you know, I’ve said this a million times.  One of the best things of the Abraham Accords

clearly has been the relationship between the GCC countries bilateral move with Israel and the United States.  I want to make sure some of that benefit also gets to the Palestinian people.  So I’m hoping to work on programs that help make sure the Palestinian people see the benefit of the Abraham Accords that can only enhance this notion that we have – we, as in the United States, have promoted – the idea of obviously the vision of a two-State solution.

But again, not to get political here, it’s just how I think about economic benefits to people.  This is not about governments, it’s just men and women, kids, and how they can benefit from the Abraham Accords and these bilateral relationships.  That’s what I get excited about. And I think that’s what we all, at the end of day, that’s what we’re trying to do: is to benefit everyone to make not only Israel a safer, democratic, Jewish state, but the economic benefits of the Abraham Accords and what we’re doing goes down to everyone who lives in this region.

So that’s how I think about the benefits.