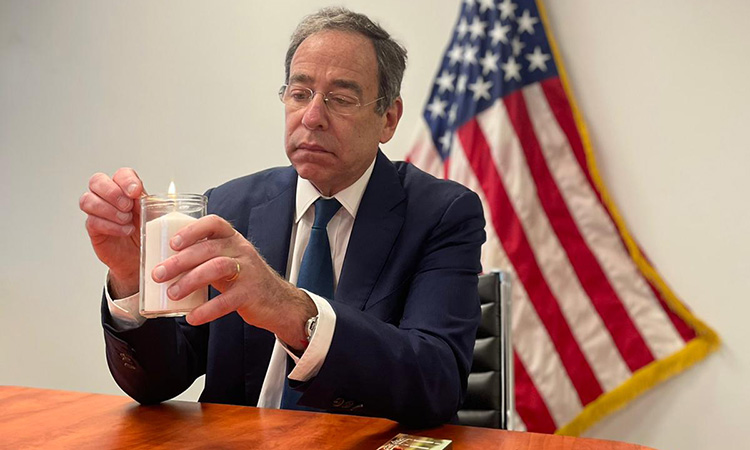 [as prepared for delivery]

Thank you, Prime Minister Bennett, for your remarks, and most importantly for your leadership. The coalition you lead is something we all should be proud of. Its diversity and leadership makes Israel stronger. And thank you to our many other participants today from the government of Israel and the diplomatic corps.

Thanks especially to our hosts at Massuah. Thank you, Chairman Feit, for convening us in this virtual forum – though I very much look forward to meeting next year in person, as is tradition. Your mission is to teach the Holocaust not just as history, but as something everyone can relate to in contemporary society.

And with antisemitism and Holocaust denial and distortion a growing danger around the world, this mission has never been more relevant or more important.

I want to take a moment to recognize the bravery and leadership of Rabbi Charlie Cytron-Walker during the terrifying hostage situation at Congregation Beth Israel in Colleyville, Texas, less than two weeks ago. I had the opportunity personally to speak to the rabbi and express my deepest respect for his leadership during this incredible crisis.

Combating antisemitism and Holocaust denial and distortion is a priority for me, personally and as U.S. Ambassador. It is also a heartfelt priority for President Biden, a man with a long history of friendship with Israel and the Jewish community. So, I am grateful for the opportunity to join you on this day of remembrance.

For those of us assembled today, diplomats and public servants, today is a day to take stock and ask – are we closer this year to a world that understands the ramifications of the Holocaust? With every year, the events of the Holocaust can, for younger generations, be more and more remote, with fewer voices of survivors.

At the same time, there are those who are disgusting, who manipulate our memories and data to spread disinformation for their own despicable ends, denying or distorting the enormity of the Holocaust, which murdered six million individual Jewish men, women, and children — friends, mothers, fathers, daughters, sons, loved ones, all human beings.

It remains our responsibility as leaders to educate our young people, confront lies and hatred, and ensure that future generations do not shy away from painful truths.

Fortunately, in this effort as in so many others, Israel and the United States are finding strength in working together.

As the Biden Administration enters its second year, the President, Vice President Harris, Secretary Blinken, and others have made it a priority to advance adoption and implementation of the IHRA Working Definition of Antisemitism.

Even last week, the passage of the UN resolution on combating Holocaust denial and distortion shows progress is being made.

But, we continue to focus ever more aggressively on condemning and countering antisemitism in all its forms; ensuring physical security for Jewish communities; investigating and prosecuting hate crimes; educating the public, especially young people; countering Holocaust denial and distortion.

But even as the United States government takes these steps, we must confront the fact that there is an alarming rise in anti-semitism around the world, which has also manifested itself in our own country.

Just twelve days ago, we had a terrorized congregation in Texas. And less than three years after one of the worst antisemitic attacks in U.S. history at the Tree of Life Synagogue in Pittsburgh. We experienced a startling spike in antisemitic incidents last year. Synagogues were vandalized in Arizona, Illinois, New York, Utah, and Alaska.

Attackers shouted antisemitic threats to Jews for eating at a Los Angeles sushi restaurant…for wearing a kippah in Bal Harbour, Florida…and for walking on the street in midtown Manhattan.

All of this, in addition to the dramatic increase in antisemitism on social media platforms since the COVID pandemic began, led President Biden to make clear that “We must all stand together to silence these terrible and terrifying echoes of the worst chapters in world history, and pledge to give hate no safe harbor.”

Clearly, we have work to do.

So, let me use this occasion to recommit to work together for a world that always remembers the Holocaust, so that future generations will continue to say: “never again.”