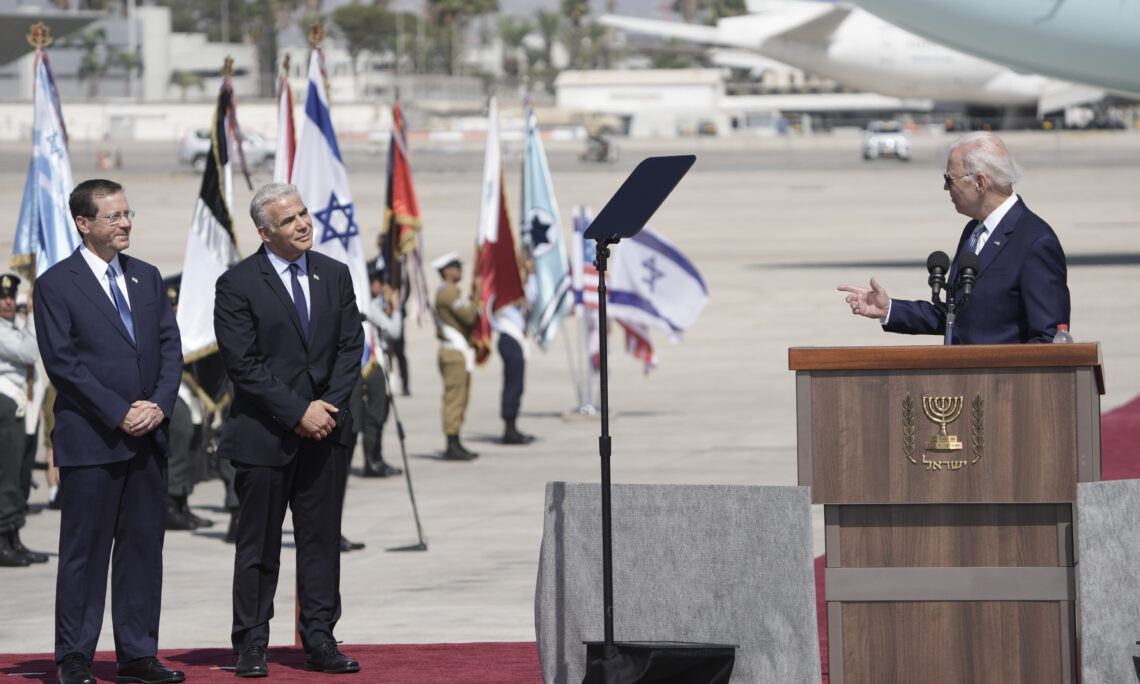 THE PRESIDENT: President Herzog, Mr. Prime Minister Lapid, it’s an honor to once again stand with friends and visit the independent, Jewish State of Israel.

President Nixon was the first American president to visit Israel in 1974.

I was actually — my first visit was, as you mentioned, as a young United States senator from Delaware in 1973, just a few weeks before the Yom Kippur War.

I had the privilege of spending time with Prime Minister Golda Meir. I’ll never forget — I was sitting next to a gentleman on my right, one of her aides. His name was Rabin.

I look back on it all now, and I realize that I had the great honor of living part of the great history of this great — and I did say and I say again, you need not be a Jew to be a Zionist.

The fact is that, since then, I’ve known every single Prime Minister and it’s been an honor, formed strong working relationships with each of them.

Every chance to return to this great country, where the ancient roots of the Jewish people date back to biblical times,

is a blessing. Because the connection between the Israeli people and the American people is bone deep. It’s bone deep.

And generation after generation, that connection grows. We invest in each other. We dream together. We’re part of what has always been the objective we both have.

I’ve been part of that as a Senator, as a Vice President, and, quite frankly, before that, having been raised by a righteous Christian who — we had dinner at our table every night before he went back to work, and it was a place where we had conversation and, incidentally, ate. And I remember he taught us all about what happened in the Holocaust. “Why weren’t the tra- — tracks bombed? Why did we not — why, why, why?” And he imbued in us a sense of obligation that we all have.

And now, as President, I’m proud to say that our relationship with the State of Israel is deeper and stronger, in my view, than it’s ever been.

And with this visit, we are strengthening our connections even further. We’ve reaffirmed the unshakable commitment of the United States to Israel’s security, including partnering with

Israel on the most cutting-edge defense systems in the world.

From here, I’m going straight to a briefing on Israeli missiles and rocket defense capabilities, including the U.S. support for the Iron Dome and Israel’s new laser-enabled system

We’re going to deepen our connections in science and innovation and work to address global challenges through the new Strategic High-Level Dialogue on Technology.

We’ll continue to advance Israel’s integration into the region; expand emerging forums and engagement — like the new I2U2 Summit, which will bring Israel, the United States, the UAE together, and India as well — to deepen economic cooperation between the Middle East and the Indo-Pacific.

It’s critical. It’s critical, if I might add, for all the people of the region, which is why we’ll be — we’ll discuss my continued support — even though I know it’s not in the near-term — a two-state solution. That remains, in my view, the best way to ensure the future of equal measure of freedom, prosperity, and democracy for Israelis and Palestinians alike.

We’re going to celebrate the ending of [enduring] people-to-people connection and the enduring connection that binds our nations together, and commemorate the history that we must never allow to repeat itself.

Later today, I will once more return to the hallowed ground of Yad Sh- — Vashem to honor the 6 million Jewish lives that were stolen in a genocide and continue — which we must do every, every day — continue to bear witness, to keep alive the truth and honor [horror] of the Holocaust — horror of the Holocaust, honor those we lost so that we never, ever forget that lesson, you know, and to continue our shared, unending work to fight the poison of anti-Semitism wherever it raises its ugly head. Wherever we find it in the world, we make real on the promise of “never again” by taking it on.

We have a full agenda over the next two days, because the relationship between Israel and the United States covers every issue that matters to our mutual futures.

We’re united in our shared values and are our shared vision. I’m looking forward to our time together over the next few days.

Thank you. And God bless you all. (Applause.)