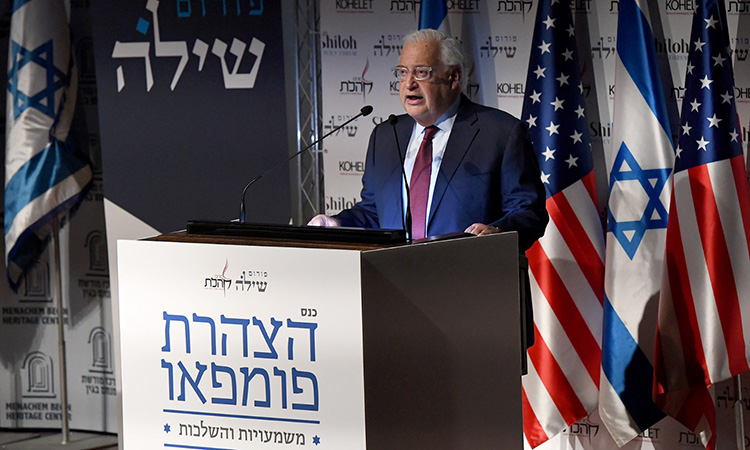 A couple of words before I begin:

We are all watching closely events taking place in the region, and we will hear in a few hours President Trump’s assessment of the reported Iranian missile strikes on bases where we have American military personnel stationed. Initial assessments are positive, and we pray those reports are true. Our military is by far the strongest in the world and our cause is just. We pray to God that we will prevail – overwhelmingly and without loss of innocent life – and I am confident that with the President’s leadership we will defeat the great threats that face us and bring about a more just and peaceful world.

With that I will turn to my prepared remarks.

I’d like to begin by extending warm greetings to all the ministers and members of Knesset in attendance, many of whom I have gotten to know well over the past three years, including of course Prime Minister Netanyahu, Foreign Minister Israel Katz and Defense Minister Naftali Bennett.

My thanks to the sponsors of today’s conference: Professor Moshe Koppel, Professor Eugene Kontorovich and the entire Kohelet team. We have had a few engagements these past three years and I am grateful for the observations and insights that you have generously shared with me.

A little bird has told me that you may be discussing today what you referred to as the “Pompeo Doctrine” — the determination by the Secretary of State that Jewish settlement in Judea and Samaria is not categorically illegal. It may not shock you to hear that I am in complete agreement with Secretary Pompeo. He is a brilliant and fiercely honest representative of the United States and it is my great privilege to work alongside him in executing President Trump’s agenda. An agenda, I might add, that correctly supports Israel in an unprecedented and positive manner, to the betterment of both America and Israel’s safety and security.

Serving as the United States ambassador to Israel, now coming on three years, has been by far the greatest honor of my life. As the US ambassador to a critical ally in a dangerous region, the job is a full-time effort just with regard to traditional bilateral issues, such as commerce, trade, military cooperation, cultural exchanges, intelligence issues, political engagement and receiving American delegations.

Since coming here, I worked to add one more item to a busy agenda: helping to find a fix to the issues that still linger from the Six Day War. Apart from perhaps the 1948 War of Independence, the 1967 Six Day War may be the defining moment of the modern State of Israel. In just six days of battle, Israel tripled in size, gained critical buffers against its enemies, reunited Jerusalem and demonstrated to the entire world that it was here to stay.

In the years that followed, Israel entered into Peace Treaties with two of the warring nations on its border – Egypt and Jordan – and it returned more than 88% of the land that it captured. But it didn’t make peace with everyone and when we came into office the lingering issues included three of significant importance: the status of 1) Jerusalem, 2) the Golan Heights and 3) Judea and Samaria. We have approached them in ascending order of complexity.

With regard to Jerusalem, we were assisted by a 22-year-old statute passed overwhelmingly, and reaffirmed in subsequent years, again overwhelmingly, by the Congress of the United States. From any and every vantage point, whether US law, biblical history or the facts on the ground, it was undeniably true that Jerusalem was the capital of Israel.

After the Jerusalem Embassy Act was passed in 1995, I anticipated that the recognition by the United States of Jerusalem as the capital of Israel would occur immediately. If you read the statute, there is an affirmative mandate for such recognition. While the move of the embassy was subject to presidential waiver on the grounds of national security, the recognition itself had no such feature. For 22 years I watched from a distance as this law on the books of America was simply ignored by Republican and Democratic presidents alike.

I thank God that President Trump had the courage and the wisdom to recognize Jerusalem as the capital of Israel and move our Embassy to Jerusalem from Tel Aviv. I was in the room among a handful of senior members of the Trump administration in 2017 when this issue was analyzed and debated. I won’t say what went on in that room. But I will say that I will never forget that meeting, or the understanding, analysis and leadership that President Trump brought to the table.

In 2018, we turned our attention to the Golan Heights. It was obscene to think that the Syrian regime, a regime that lost the Golan after attempting to annihilate Israel and which, since 1967, has led the world in barbarism against its own people and others, could even compete with Israel on a claim to title. The President understood this and recognized as well the strategic importance to Israel of the Golan. He acted quickly and decisively to recognize Israel’s sovereignty.

In reaching his decision the President had also requested our views on its legality. Some of you may be familiar with the analytical piece authored by Secretary Pompeo and me on the subject and published in the Wall Street Journal. As we state in that article in great detail, UNSCR 242 – the agreed-upon architecture for the resolution of this conflict – requires territorial concessions by Israel only in exchange for “peace within secure and recognized boundaries.” In recognizing Israel’s sovereignty over the Golan Heights, President Trump, evaluating the continuous malign and barbarous threats posed by Syria, concluded that no northern boundary for Israel would be secure except a boundary that incorporated the Golan. He acted well within the language of 242.

And now we come to Judea and Samaria, certainly the most complicated of the issues, because of the large indigenous Palestinian population. Balancing security considerations against the freedom of movement, reconciling competing historical and legal narratives and entitlement, aiding the economy in the face of accusations of attempted normalization – it’s complicated and challenging.

But over the years before we came into office, it’s only gotten more complicated and more challenging. The proverbial goal posts have moved and moved – to the point today where they are no longer even on the field.

Judea and Samaria – the name Judea says it all – is territory that historically had an important Jewish presence. As they say, it is the biblical heartland of Israel. It includes Hebron, where Abraham purchased a burial cave for his wife Sarah; Shiloh, where the tabernacle rested for 369 years before the Temple was built by King Solomon in Jerusalem; Beth El, where Jacob had his dream of the ladder ascending to heaven; Kasr al-Yahud, where Joshua led the Israelite nation into the Promised Land and John the Baptist baptized Jesus, and so many other famous locations.

After the Ottoman Empire fell, Judea and Samaria, along with the rest of what was then referred to as Palestine, became subject to a British Trust which was subject to the Balfour declaration, the terms of the San Remo conference, and the league of Nations Mandate. In simple terms, the British were obliged to facilitate settlement of the Jewish people in this land. That’s not to say that Jewish settlement was exclusive, that no one else had the right to live there. But Jews certainly did.

We then fast-forward to 1967 and the Six Day War. After being attacked, Israel recovers Judea and Samaria from Jordan. Jordan had occupied Judea and Samaria for only 19 years and almost no one recognized its rights to the territory.

So, intuitively, who has a good claim to the land? Israel, whose historical and legal rights were recognized by the league of Nations, Jordan, which was there for only 19 years with virtually no legitimacy, and which, in any event, renounced its claim to territory West of the Jordan River in 1995, or the Ottomans, who washed their hands of Palestine after World War I. The answer, with all due respect to all the scholars, seems obvious.

And because that was so obvious, the goalposts started to move. The armistice line of 1949 – a line to which the enemies of Israel agreed to hold until they re-armed and again sought Israel’s destruction (as they did in 1973) – all of a sudden became the inviolate “Green Line,” the limit of Israel’s territorial entitlement.

Settlements became per se illegal under amorphous notions of international law that no one could seriously reconcile with San Remo or the League of Nations Mandate. And resolution 242 became a mandate for Israel’s withdrawal from all captured territory, even though the resolution was heavily wordsmithed to avoid such an interpretation, and even though the US representative who negotiated 242, Yale Law School Dean Eugene Rostow, has said that Israel has an unassailable right to settle in Judea and Samaria.

The Pompeo Doctrine does not resolve the conflict over Judea and Samaria. But it does move the goalposts back onto the field. It does not obfuscate the very real issue that 2 million or more Palestinians reside in Judea and Samaria, and we all wish that they live in dignity, in peace, and with independence, pride and opportunity. We are committed to find a way to make that happen.

The Pompeo Doctrine says clearly that Israelis have a right to live in Judea and Samaria. But it doesn’t say the Palestinians don’t. Rather, it calls for a practical negotiated resolution of the conflict that improves lives on both sides.

We invoke your ideas and your prayers and getting to that point. Your help is very much appreciated. May God bless you. May God bless Israel and may God bless the United States of America. Thank you.