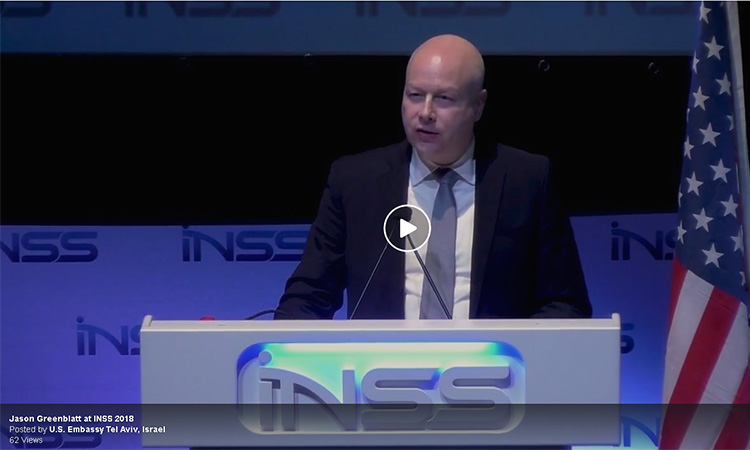 Good evening, and thank you for inviting me to join you.

In Judaism, the word “peace” is found in the common greeting Shalom Aleichem. In the Muslim world, As-Salaam-Alaikum, or “peace be with you,” is similarly used. And yet, despite the similar emphasis and articulation of peace in their most common greetings, pursuing peace between Israelis and Palestinians can seem a daunting, even impossible, task. But what I would like to tell you is that after extensive travel in the region to explore the possibility of Israeli and Palestinian peace this year, I continue to firmly believe that there is a real path forward towards peace. I feel this way despite the rhetoric over the past few weeks.

Much has changed since my first trip to the region in 1983. At that time, the prevailing interest of the Arab world – with the exception of Egypt – was the rejection of Israel, even calls for its destruction, and the very real possibility of war.  Some thirty-five years later, however, my many meetings with the leaders of Israel, the Palestinian Authority, Jordan, Saudi Arabia, Qatar, Egypt, and the United Arab Emirates, reveal a different reality. Confronted with an emboldened, aggressive Iran, and populations eager for economic opportunity, many leaders understand now that Israel is not the problem—in fact, Israel could be part of the solution.

Despite criticism following President Trump’s recognition of Jerusalem as Israel’s capital, for the most part I have seen a growing receptivity to peace across the region. During my travels, I found Israelis, Palestinians, and Arabs, young and old alike, secular and religious, Muslim, Christian, or Jewish, to be increasingly inspired by the possibility of peace. President Trump has brought a fresh set of eyes and energy to the task of peacemaking. It is clear that President Trump’s actions and language have changed expectations about what is possible. He has revitalized the discussion and language of peace in the region.

It is no secret that our approach to Israeli-Palestinian peace reflects the President’s unorthodox approach to the region, for, after years of well-meaning attempts to negotiate an end to this conflict, we have all learned some valuable lessons.

President Trump believes that fresh thinking and bold decisions are needed to advance the cause of peace, and we have acted in accordance with that guidance.  This has led to a great deal of speculation about the peace process and, indeed, about the role that the United States will play in it moving forward.  I want to take this opportunity to cut through the noise and put this speculation to rest.

Our approach is rooted in the belief that instead of working to impose a solution from the outside, we must give the parties space to make their own decisions about their future.  Our approach is also guided by the belief that instead of laying blame for the conflict at the feet of one party or the other, we must focus on unlocking new areas of cooperation which benefit both Palestinians and Israelis.

To this end, the President has made clear that he will support whatever the two sides can agree to.  We will not impose a deal on either party. But, we know the desire for peace is real, is powerful, and should be harnessed.

Over the past months, we have deliberated with the leaders of both sides on potential paths to a comprehensive peace agreement.  We have also had multiple meetings with regional leaders. In the weeks and months ahead, my dedicated and talented colleagues from the staffs of the White House, the National Security Council, the State Department, as well as U.S. embassies and consulates throughout the Middle East and I will continue to focus our efforts on the pursuit of peace. Israelis and Palestinians deserve our absolute best effort.

I would like to address President Trump’s announcement about Jerusalem. When President Trump made his historic decision to recognize Jerusalem as Israel’s capital, he was not rewriting history – he was recognizing an obvious reality.  As the President noted, Jerusalem is the seat of the Israeli government.  It is the home of the Knesset and the location of the official residence of the prime minister and the president.  It has been the cultural and spiritual homeland of the Jewish people for thousands of years and Israel made Jerusalem its capital 70 years ago.

We deeply believe that recognizing this reality was an important step, not just for Israel, but to lay the ground for a comprehensive, enduring—and real peace.  That’s why the President took great care to explain what his decision does and does not mean.  Let me once again make it clear:

Did the announcement change the status quo at Jerusalem’s holy sites?  It did not.  President Trump explicitly called for all parties to continue to maintain the status quo at the Temple Mount/Haram al Sharif.

Did the decision, then, signal the United States’ abandonment of the peace process, or a bias against one side?  Again, I answer, no.  The United States is as committed as ever to reaching an agreement that guarantees a peaceful, prosperous future for both Israelis and Palestinians.  That’s why this administration continues to work on developing a peace plan that can bring both parties to the negotiating table.

In fact, since the Jerusalem announcement, and despite the negative reaction of many to the announcement, we have remained hard at work and have not deviated for a moment on our efforts with respect to the peace plan. Despite the rhetoric that you have heard from various government officials and the media in response to the President’s Jerusalem announcement, President Trump, the peace team, and so many other members of the US Government remain deeply dedicated to resolving the Israeli-Palestinian conflict.

As we move forward, it is important that we not allow our efforts to be disrupted by false claims about the nature or purpose of our decision.  These distractions help no one, least of all the Palestinian people.

Peace will not be achieved by denying Judaism’s thousands of years of ties to Jerusalem and the land of Israel. Peace will not be achieved by walking away from negotiations. Peace only has a chance of success through respectful, continuous dialogue and through negotiations. It is easy to walk away from the table. But that helps no one, and it reduces or perhaps eliminates the chances of achieving a comprehensive peace agreement. And that would be terrible for the Palestinian people.

The path we must travel together to achieve peace is in all of our hands. We must be prepared for it to be filled with bumps and disappointments, and, as with most complex issues, we will have our good days and bad days, good weeks and bad weeks, but we must forge ahead to realize our vision together.

As Vice President Pence said in Jerusalem just last week:  “We know Israelis want peace, and we know that Israelis need no lectures on the price of war.  The people of Israel know the terrible price all too well.”

The INSS exhibit you will see out in the hallway goes back more than half a century, analyzing a series of negotiations that have, undoubtedly, made the people of this region more secure.  A common factor in all of these negotiations was the presence of American mediator, working alongside Israelis, Palestinians, Jordanians, Egyptians and others involved.

America has always been here with you in advancing the way along a negotiated path.  That’s been true in the past; it is true in the present; and we will be here in the future. Americans know this, Israelis know this, the region knows this, and, yes, the Palestinians know this.

Thank you very much.