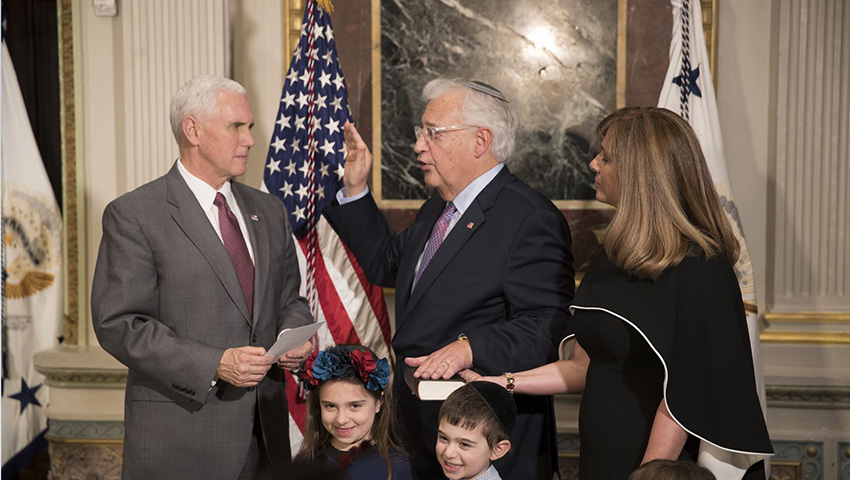 THE VICE PRESIDENT:  Good afternoon.  On behalf of the President of the United States of America today it is my great privilege and honor to administer the oath of office to the 20th United States Ambassador Israel, David Friedman.  (Applause.)

We’re joined today by his beautiful family, beginning with his wife, Tammy; their five children.  (Applause.)  And five of their beautiful and highly animated grandchildren.  (Laughter.)

It is really an honor to have with us David’s counterpart, as well, the Israeli ambassador to the United States, Ambassador Ron Dermer.  Mr. Ambassador.  (Applause.)

Thank you all for being here at this historic occasion.  It’s the greatest privilege of my life to serve as Vice President to President Donald Trump.  (Applause.)

The President of the United States of America is a lifelong friend of Israel and the Jewish people, and under his leadership, if the world knows nothing else, the world will know this: America stands with Israel.  (Applause.)

One of the clearest signs of the President’s commitment to the State of Israel and to its people is in his choice of David Friedman as America’s Ambassador to Israel.

David, you literally were born for this job.  It is because of families like yours that the Jewish people are such a beautiful thread in the fabric of this nation.

Your father, Morris, was a rabbi in New York, and as the Book of Proverbs teaches, he and your mother trained you up in the way you should go.

And so you have.  They raised you with the same faith as your forefathers, and instilled in you a love for America and for Israel from your very earliest days.

And that love has been evident throughout your life.  In over 35 years as a successful lawyer, you have always made it a priority to support Israel’s peace, security, and prosperity.  And you’ve worked tirelessly to deepen the friendship between our two nations.

Over the years, you have literally traveled to Israel more 75 times.  You have been a leader in humanitarian philanthropy to help the people of Israel in their time of need.  You’ve always been quick to rise to Israel’s defense from those who would condemn her — because in your heart you know that those that hate Israel hate Israel not for what she does wrong, but for what she does right.

President Trump has now called on you to represent our nation as the ambassador to our most cherished ally.  And this is a critical time for our two nations and our peoples.  The challenges we face are many, but our resolve to overcome them has never been stronger.

Under President Trump’s leadership, the United States will always be a faithful friend to the Jewish State of Israel.  And David, the President and I both know that you will help us make the immutable bond between our people and the people of Israel even stronger still.

So, on behalf of President Trump, it’s now my great privilege to administer to you the oath of office.

(The oath is administered.)  (Applause.)

AMBASSADOR FRIEDMAN:  Thank you, Mr. Vice President, for your kind words and your extraordinary leadership.  You have been a beacon of moral clarity in a world that increasingly needs such a beacon more and more.  Thank you so much.

My thanks to President Trump for his courageous leadership, his friendship, and his guidance.  I am humbled by the trust he has placed in me, and I will do everything that I can to justify his faith and confidence in my abilities.

I’m very proud to say that my nomination represents the first time in American history that the U.S. ambassador to Israel was nominated by the President as early as the first day of his presidency.  I was nominated on January 20th on Inauguration Day.

I’m equally proud to say that this is the first time in American history that the U.S. ambassador to Israel was the first ambassador approved by the Senate and given the oath of office.  Those facts speak volumes about how highly the Trump-Pence administration prioritizes our unbreakable bond with the State of Israel.

I’ve also been deeply inspired by the leadership of Secretary Tillerson, and I look forward to working with him to promote peace and stability within the Middle East.

A few days ago I left a legal practice that was a great source of professional pride and accomplishment.  My deepest gratitude to the partners of what was once called Kasowitz, Benson, Torres & Friedman.  (Laughter.)  And especially to Marc Kasowitz for his deep friendship and understanding.

I have a few close friends who are here whose friendship I deeply value — none more so than Eric Hirschman (ph), who has guided my transition from the private sector to public life.  Thank you, Eric.

My children and most of my grandchildren are here.  They are everything to me — seeing the pride in their eyes inspires me to take on this new task with great energy and enthusiasm.

My wife and I have four parents.  Our fathers are no longer of this world, and my mother is not well enough to travel.  And so I welcome today Bunny Sand, my mother-in-law, as the representative of our beloved parents.  And I know that her pride is felt by those who are no longer with us.  (Applause.)

Finally, my undying love and devotion to my beautiful wife, Tammy.  As I said at the confirmation hearing without her, none of this would have even been thinkable, let alone possible.

Thank you all very much.  (Applause.)