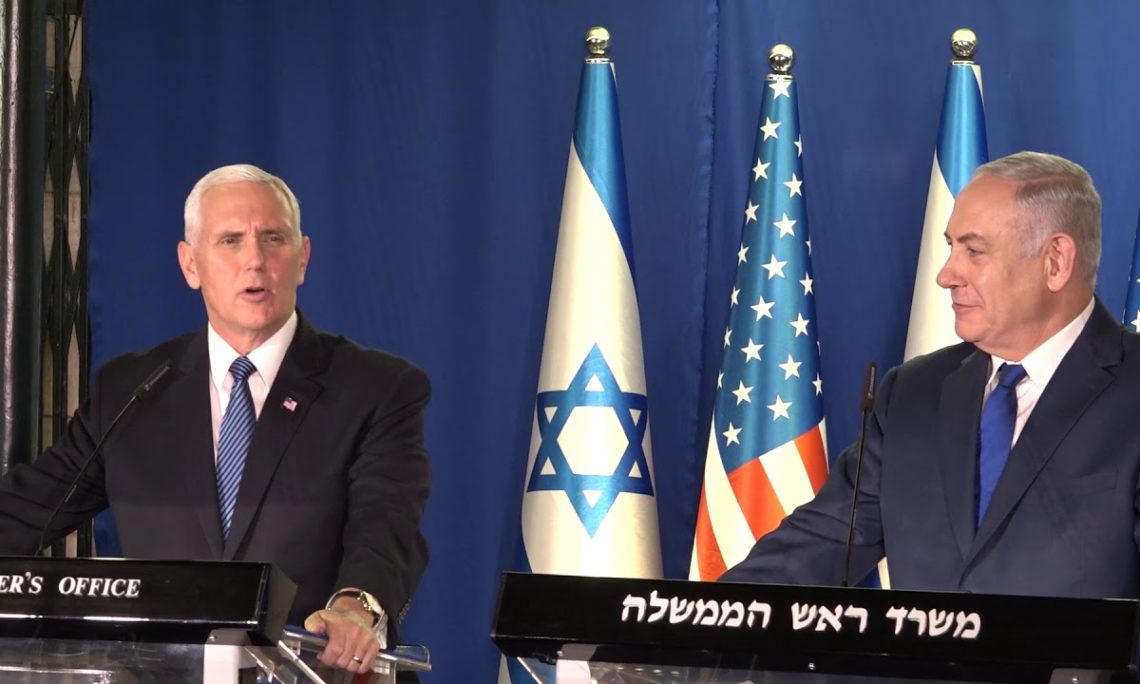 PRIME MINISTER NETANYAHU:  Vice President Pence, Mike, Sara and I want to welcome, again, you and Karen to Jerusalem.  We’ve known each other for a good many years.  And from the day I met you, I knew you were a true friend.

I remember vividly, one day in 2009, when I came to meet the congressional leadership in Washington.  And, Mike, you spoke up with such clarity and such conviction in support of the direction I was leading Israel.  I will never forget that.  And I was touched to learn earlier today that you have a photograph of that very meeting in the Vice President’s residence, in Washington.  So it’s truly an honor for Sara and me to host you and Karen tonight, in our residence.  And our wives further deepen our friendship.

I want to express once again Israel’s appreciation to President Trump and to you for the historic decision last month to recognize Jerusalem as our capital.  I also want to commend you for your magnificent speech in the Knesset today.  You saw people standing up again and again, applauding you — applauding the principles that guide your policy, applauding the genuine friendship that emanates from your heart.

It was a powerful expression of the enduring bond between our two countries and of your personal commitment to Israel, the commitment of President Trump and your entire delegation.

Earlier today, we discussed both common challenges and common opportunities in a very turbulent Middle East.  And the foremost challenge comes from Iran.  The tyrants of Tehran have spent billions of dollars spreading murder and mayhem throughout the Middle East to advance their poisonous ideology.

I want to salute both President Trump and you, Mr. Vice President, for standing with the people of Iran, when so many in Europe and elsewhere were shamefully silent.  Some — and this is hard to believe — some actually hosted the regime’s mouthpieces while its goons were throwing thousands of Iranian protestors into prison.

Like President Trump, Israel believes the nuclear deal with Iran is disastrous.  It ultimately paves Iran’s path to a nuclear arsenal, and a regime that arms terrorists throughout the world, calls for Israel’s destruction, calls “death to America” and “death to Israel.”  Such a regime should not have nuclear weapons.

That’s why Israel supports President Trump’s policy regarding the deal.  And there is still time for leaders to seize the opportunity that President Trump has offered them — to correct the failings of this failed deal.  But if those leaders do not seize that opportunity, or if they offer only cosmetic changes, Israel will unequivocally support the President’s decision to walk away from a bad deal and restore crippling sanctions.  Our position is clear: Fully fix it, or fully nix it.

The Vice President and I also discussed opportunities for advancing peace.  As countries in the region increasingly realize that Israel is not their enemy but a great ally of their wishes for a better future, the chances grow for a broader reconciliation.  Israel will continue to work with President Trump’s able representatives — Jared Kushner, Jason Greenblatt, Ambassador David Friedman, along with our Ambassador Ron Dermer — to advance peace with all our neighbors, including the Palestinians.

The sooner the Palestinians accept the truth about the millennial connection of the Jewish people to this land and to this city, the sooner we can work together to reach an historic agreement that will create a better future for both our peoples.

We know that, in all these efforts, we have no better friends than President Trump and you, Mr. Vice President.

Once again, Mike, Sara and I are honored to host such dear friends of Israel, of the Jewish people, and dear personal friends.  Thank you for being a stalwart champion of the alliance between America and Israel, and thank you for all you are doing to strengthen that alliance.

Welcome to Jerusalem.  Welcome to our home.  Thank you.  (Applause.)

The American people cherish our relationship with Israel.  And your comments today, before the Knesset, your comments here this evening, and your gracious words toward our President and myself are deeply meaningful to me and, I know, meaningful to every American who cherishes our historic alliance.

It is an honor for me to stand with you here today, in Jerusalem, the capital of the State of Israel.  (Applause.)  I spoke to the President this afternoon, shortly after my address, and he asked me to give you not only his greetings but his thanks — thank you for the hospitality and the warm welcome you’ve extended to his Vice President.

But more to the point, the President wanted me to thank you for your stirring words before the Knesset and your stalwart commitment to freedom, your strong leadership for the people of Israel, and your commitment — your unbending commitment — to the relationship between the United States and Israel.

Over the past three days, I’ve had the opportunity to travel across this region.  I met with President Al Sisi in Egypt and King Abdullah in Jordan.  We talked about the changing times in which we live.  Those two nations, as I said today, that forged peace with Israel years ago, and now recognize the rise of a common threat in Iran, and the opportunity that we have for, in your words, Mr. Prime Minister, a broader reconciliation across the region.  And we share that aspiration and that ambition.

Before we return to the United States tomorrow, Karen and I will take a moment to pay our respects at Yad Vashem.  And we’ll have the privilege to pray at the Western Wall.  And I must tell you, this is our fourth trip to the Holy Land, but we never fail to leave here without a sense that our faith has been renewed — our faith in God, but also our faith in the extraordinary people of Israel and in their commitment to freedom and security and peace.

And I must say, I leave here with confidence that with President Trump in the White House, and with your strong leadership here in Israel, that the best days for the United States and our most cherished ally, Israel, are yet to come.

Thank you.  Karen and I look forward to a lovely dinner with you and Sara.  And we are grateful for your friendship and hospitality.  (Applause.)

The Prime Minister has granted me leave to address news on the home front, back in the United States.  And let me say, we welcome the news that thanks to the firm stand taken by President Trump, and House and Senate Republicans, the government shutdown in Washington, D.C. is coming to an end.  (Applause.)

Now, the American people know what happened here.  A minority in the United States Senate chose to shut down the government, denying our soldiers benefits and wages that they earned, jeopardizing government services just to advance an issue pertaining to illegal immigration.  But the Schumer Shutdown failed.

Now that the government is reopening, Congress can get back to work advancing the President’s agenda — an agenda that’s already created more than 2 million jobs, is setting records on the American stock market, has restored American strength and credibility in the world.  And I look forward to returning to Washington, D.C. tomorrow and working closely with members of Congress to continue to advance our President’s agenda.  And it is, Mr. Prime Minister, an agenda that’s making America great again.

Thank you for the opportunity.  (Applause.)

PRIME MINISTER NETANYAHU:  Thank you.  You’re all invited to our budget deliberations in the Knesset in the coming weeks.  (Laughter.)