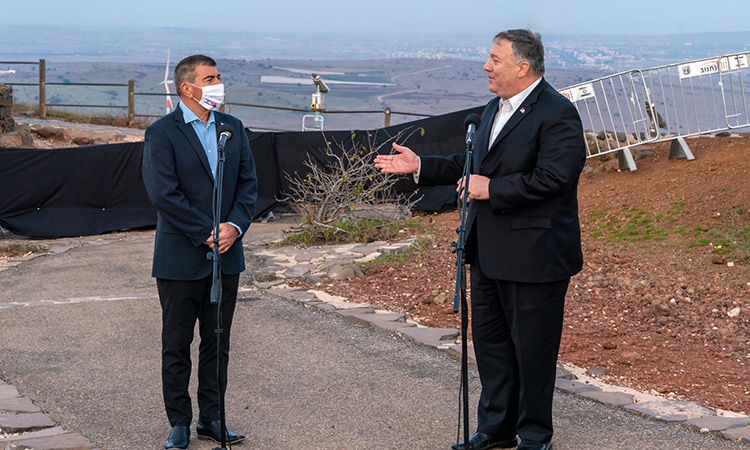 FOREIGN MINISTER ASHKENAZI:  Secretary, I’ll just state, a great friend of Israel.  (Inaudible) Pompeo and the Ambassador.  We just had a great visit and I think briefing about the Golan Heights.  I would like to take the opportunity to thank both the President Trump and the Secretary for their long support for the security and the fate of the State of Israel.  Secretary made an historic visit to the Golan Heights, I think first ever to here.

He – as a former head of the CIA, he knows – he knows the facts, but he insisted to come to see firsthand and to hear the briefing from the military commanders and to hear from our legendary hero, Kahalani, what happened.  In his background, he was an officer, armored officer, so he knew the story, but – and I think there is no need to explain when you stand here what’s the strategic importance of the Golan Heights.  So thank you for recognizing the sovereignty of the State of Israel.  Thank you for coming, and really appreciate it.

SECRETARY POMPEO:  Thank you.  Thirty-five years ago as a young cadet, I studied about this very place – this amazing and important piece of real estate.  You can’t stand here and stare out at what’s across the border and deny the central thing that President Trump recognized that previous presidents had refused to do.  But this is a part of Israel and a central part of Israel.

I remember too not long after I was a cadet, I was an officer in the United States Army.  And I remember the international pressure to return this very place to Syria.  It was all the rage in the salons in Europe and in the elite institutions in America to say that this should be returned to Syria.  Imagine, imagine with Assad in control of this place, the risk, the harm to the West and to Israel and to the people of Israel.  President Trump just recognized the basic fact that this indeed is part of Israel.  And it was an honor to be there.  It was an honor to be here with General Kahalani and to hear the story – the famous battle of the Valley of Tears fought here where as a younger officer he saved this great nation.  So it’s great to be here with you.

I told the Prime Minister that I very much wanted to come here on this trip to tell the world that we have it right.  That we, the United States, has it right and that Israel has it right.  And that each nation has the right to defend itself and its own sovereignty.  And that the United States of America and the Trump Administration will continue to do all that we can to make sure that Israel has what it needs to do just that.  And we will honor your right to defend your own people.  So thank you very much Mr. Foreign Minister for being with me, and thank you all for joining us out here today.  Thanks.

MODERATOR:  Thank you, excellencies.  Thank you all.