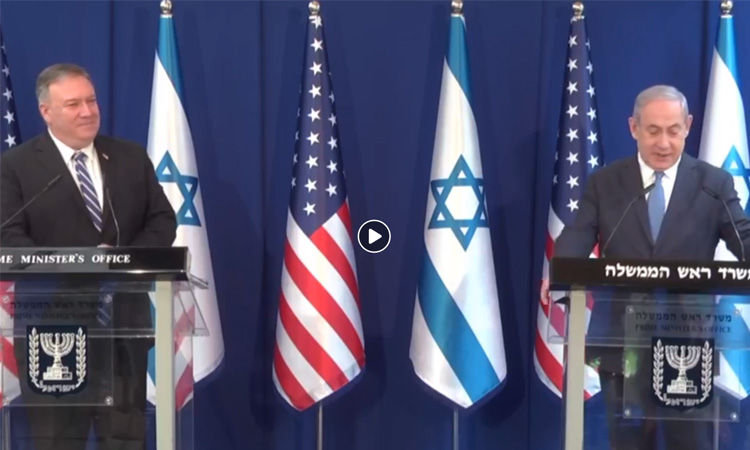 PRIME MINISTER NETANYAHU: Good morning. Mr. Secretary, Mike, welcome once again to Jerusalem. This visit comes a few days after the loss of your late father, Wayne. I want to express the condolences of my family to your family and of the people of Israel to you. I have to say that just reading about your father, we recognize the values that he instilled in you that are so evident in everything that you do. So please accept our condolences.

SECRETARY POMPEO: Thank you very much.

Equally, we have a lot to talk about. The first thing is the plague. The corona plague is something that challenges the entire world, our two countries and everyone else, and we’d like to talk about strengthening our cooperation, our partnerships in battling the coronavirus plague.

The second thing is that there’s something else plaguing our region, which is unremitting Iranian aggression and terror, and I want to express my appreciation for the strong position that the President and you and your administration put forward against Iran – first, by withdrawing from the dangerous Iran deal; second, by taking head on t he masters of Iranian terror; third, by going after, continuing the arms embargo against Iran that has not stopped for a minute its aggressive designs and its aggressive actions against Americans, Israelis, and everyone else in the region. So I want to express our appreciation for that and also discuss how we can continue in our partnership to combat and confront and roll back Iran’s aggression in the Middle East, in Syria, everywhere else.

The third point is that now we’re about to form a national unity government, tomorrow, I am – I think that this is an opportunity to promote peace and security based on the understandings that I reached with President Trump in my last visit in Washington, in January.

And these are all tremendous challenges and opportunities, and we can do them because we have such a – such a powerful bond that makes the alliance between Israel and the United States stand out, certainly for us but I think for many other countries looking around. There is an unbreakable bond of values and interests that has kept this alliance together but also kept it growing and growing and growing. It’s never been stronger.

Tomorrow marks 72 years from the president – the recognition of President Truman of the state of Israel, the young state of Israel, and it also marks two years from another historic decision: the recognition of Jerusalem as Israel’s capital by President Trump. I think that this brackets the tremendous partnership that we have, the friendship that we have, the great sympathies that the people of Israel and the people of America have with one another. Your trip at this time is a powerful expression of that, and I want to welcome you in this spirit to Jerusalem. Thank you, Mike. Welcome.

SECRETARY POMPEO: Thank you. Thank you very much, Mr. Prime Minister. First of all, thank you for your kind words about my father. It’s deeply appreciated. I want to express my condolences, too, for the soldier yesterday —

SECRETARY POMPEO: — that was killed. It reminds us all of the importance of making sure that people all across the world know that Israel has the right to defend itself, and America will consistently support you in that effort.

You talked about this. Two years ago today we dedicated the embassy in Jerusalem. It was pretty remarkable. It seems like a long time ago; much has happened since then and much in our relationship has continued to grow in those 24 months as well, and I want to thank you for that personally in making that happen. It’s important for America, it’s important for Israel, it’s important for democracies across the world.

We’ll have this great opportunity to chat about lots of topics. I always love coming here as a person of faith. It’s fantastic. When I came down the road today I got a chance to see some of the walls of the Old City. It always reminds me of the historic nature of this place and this very special, special city that we’re in today.

We’ll certainly talk about the challenges the globe faces with COVID – Israeli technologies, Israeli medical expertise, all of the things that you and I and our teams can work on together. I know we’ll deliver good outcomes and decrease risk for people all across the world from this global pandemic. You’re a great partner. You share information, unlike some other countries that try and obfuscate and hide that information, and we’ll talk about that country, too, some.

SECRETARY POMPEO: Yes, that’s right. Democracies do both of those incredibly well.

Second, we’ll get a chance, too, to talk about the Vision for Peace. We’re now some months on from the day that you came to Washington when President Trump announced that Vision for Peace when you were there. There remains work yet to do, and we need to make progress on that. I’m looking forward to it.

You spoke thoughtfully and candidly about Iran, as you always have. President Trump has done the same. The campaign that we have been part of to reduce the resources that the ayatollah has to inflict harm here in Israel and all across the world has borne fruit, it has been successful, and we’re going to stay at it. There is still work to do on that file as well. As you talked about, even during this pandemic the Iranians using the ayatollahs’, the regime’s resources to foment terror across the world even when the people of Iran are struggling so mightily tells you a lot about the soul of those people who lead that country.

I look forward to our visit today. I’m going to get a chance to meet with Speaker Gantz as well, and I’m really looking forward to albeit my very short stay here in Israel.

PRIME MINISTER NETANYAHU: As long as it’s a very short stay for him as the speaker, it’ll be good. (Laughter.)

PRIME MINISTER NETANYAHU: You’re very, very welcome, as is your delegation, and thank you all for coming here today.

Good to be in Israel again today with @IsraeliPM @Netanyahu. We had a fruitful discussion on ways we can work together to address the many shared challenges we face. As always, the U.S. has a great friend in Israel and our commitment to Israel’s security is unwavering. pic.twitter.com/nSs98dUCsx

U.S. Secretary of State Michael R. Pompeo meets with Blue and White MK Gabi Ashkenazi at the U.S. Embassy in Jerusalem, on May 13, 2020.