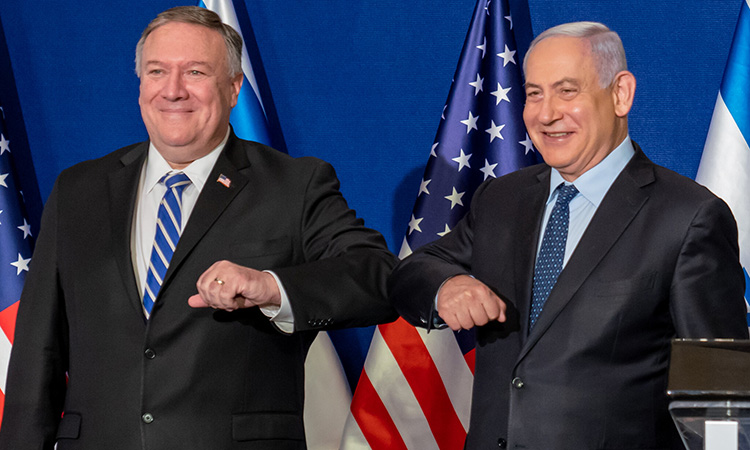 PRIME MINISTER NETANYAHU:  We just had a very intimate and productive conversation overlooking the walls of Jerusalem, and it reminded me of how deep and profound your tie is to the Jewish state.  I gave you a Bible as a gift, and I said that the people of the book have not had a better friend, and I mean it.  And I want to also express my appreciation for our personal friendship and everything that went along with it.  So every word that I’m saying here is meant from the heart.

I think that the first thing I should do is also express my condolences on the deaths of six American members of the MFO in Sinai.  You were a serviceman and you know the pain of the loss of the people.  They were killed last week in a tragic accident.  I sent a note, but I want to say it directly to you.  And they were killed along with fellow peacemakers from France and the Czech Republic.  So we honor their memory and our thoughts and prayers are with their families.

Mike, we worked together closely for these past four years, first when you were CIA director, and then as Secretary of State.  And I think that from those two unique vantage points, you’ve seen firsthand evidence of what I’ve been saying for many years, that the United States of America has no better friend than the State of Israel, and you can attest to that in a variety of ways.  But you also worked hard to prove the other thing that I’m saying for many years, and you contributed to it personally mightily, that Israel has no better friend in the world than the United States of America.

Israel is deeply grateful for all that President Trump has done, with you and the others of the team, to strengthen Israel and to advance peace in Israel, is deeply grateful to you, Mike, for your unwavering support.  You have, under your leadership in the State – the CIA and the State Department – you strengthened the alliance between Israel and the United States.  In your tenure at the CIA, intelligence cooperation was made stronger than ever, enhancing the security of both our countries.  Under your leadership at the State Department, U.S. representatives at the UN and other international forums have unabashedly defended Israel with no apologetics and no artificial correctives – just defended Israel, defended what is right, defended what is true.  America has firmly stood up to the perversion of justice at the ICC, and I want to thank you for your personal involvement in all these things.  Everything that I said involves your personal contribution as well.  And the U.S. rejected the assumptions about the legal status of Israeli communities in Judea and Samaria.

SECRETARY POMPEO:  Thank you.  Mr. Prime Minister, it is an honor and a joy to be here with you today.  Last night, I had a chance to walk through the City of David.  Today, you and I met looking out over the Old City.  The peace, the increased prosperity, and the reduced risk – to citizens all across the world, and in the region, and to here in the Jewish homeland – that we have accomplished together is historic.  And you should be proud that you have led your people in this direction, and President Trump I know is proud of the work that we have done alongside of you.

We’ve done incredible things; it’s remarkable.  You went through the list, whether it’s the simple fact of recognizing the reality of Jerusalem as the rightful, proper, true capital of Israel –crazy that the United States hadn’t done this for decades.  And then we moved to our embassy there – how simple, how right, how just.  I remember the stories when I was serving in Congress, that if we did this there would be war.  But in fact, peace is what has followed.  Today I’ll get a chance to visit the Golan Heights.  The simple recognition of this as part of Israel too was a decision President Trump made that is historically important and simply a recognition of the reality.

And then you talked about the fact that for a long time, the State Department took the wrong view of settlements.  It took a view that didn’t recognize the history of this special place.  And instead, now, today the United States Department of State stands strongly to the recognition that settlements can be done in a way that are lawful and appropriate and proper.  I’m proud of the three Abraham Accords.  I’m hopeful and confident there will be more.  It was because of your good work, because of the good work of the American team.  It was because of great leaders in those three countries who did the right thing.  And I’m confident that this will continue.

It will continue because people are demanding peace.  People have come to recognize all across this region that the right thing to do is recognize the State of Israel as appropriate and proper and a great wonderful partner for all things economic and academic and security.  I am confident that this this one-way movement, this one-way ratchet towards peace, will continue.

Today I want to make one announcement with respect to a decision by the State Department that we will regard the global anti-Israel BDS campaign as anti-Semitic.  I know this sounds simple to you, Mr. Prime Minister, it seems – it seems like a statement of fact, but I want you to know that we will immediately take steps to identify organizations that engage in hateful BDS conduct, and withdraw US government support for such groups.  The time is right.

SECRETARY POMPEO:  Look, we want to stand with all other nations that recognize the BDS movement for the cancer that it is, and we’re committed to combating it.  Our record speaks for itself.  During the Trump administration, America stands with Israel like never before. Indeed, the commitment we’ve made, the ironclad commitment we’ve made to the Jewish state, will continue.  It was – I’m confident that after our conversation this morning – we talked about how we can protect Americans and Israelis in the region from the regime in Tehran.  You talked about this.  They remain – we should not take for granted they remain the foremost state sponsor of terrorism in all the world.

Israel’s provided outstanding support to our pressure campaign, which we have no intention of relaxing.  Indeed, just yesterday, the United States unleashed a wave of new sanctions on senior regime officials, an arm of the regimes oppression that pose as a charitable foundation – it’s known as *Mahshahr.  These actions marked the one-year anniversary of the regime’s massacre of its own citizens in the city of Mahshahr, citizens who were peacefully protesting their government’s corruption and abuses.  We stand with the Iranian people against those abuses.  We want peace and security for the entire region, and for Israel in every respect.  These landmark agreements we’ve secured over these last handful of weeks give new hope that Israelis and Palestinians can end their conflict.

I also conveyed to the Prime Minister our support for the decision by the Governments of Israel and Lebanon to begin discussions on the maritime boundary, for which we are acting as a mediator and facilitator.  We hope that this long-standing dispute can be resolved.  The negotiation has the potential to yield increased stability, security, and prosperity for both Israeli citizens and those in Lebanon as well.

One more point:  In August of this year, the U.S. supported the renewal of the UNIFIL mission, but we demanded some important conditions, and for good reason.  For far too long, Hizballah has enjoyed near-total freedom of movement through UNIFIL’s mandated areas of control, and with Iran’s support, has built up an arsenal of weapons, fired missiles into Israel, dug attack tunnels underneath the Lebanon-Israel border, and more.  The United States cannot abide by these actions against our trusted friend. The most recent renewal of the mandate included new reporting requirements on those attacks against peacekeepers and investigations of access denials.  We are hopeful that these important steps will ensure UNIFIL can be a multilateral mission that actually fulfills its mandate.  If not, we’ll have to move in a different direction.

Mr. Prime Minister, it’s always an honor to be here with you and to visit Israel.  This is a place that has a special place in my heart and the heart of so many Americans.  Bless you.  Thank you for your good work alongside the Trump administration.  I wish all of us many, many more years of successful partnership between our two countries. Thank you, Mr. Prime Minister.