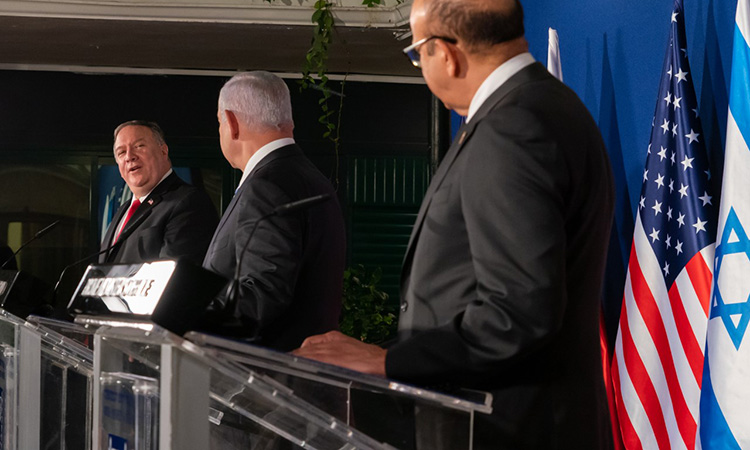 PRIME MINISTER NETANYAHU:  Thank you.  Secretary of State Pompeo, my dear friend Mike, it’s always a pleasure to see you in Jerusalem.  Foreign Minister Dr. Al Zayani, it’s a pleasure to see you again, and it’s a tremendous pleasure to welcome you for the first time ever in Jerusalem.  Under Secretary for International Affairs Shaikh Al Khalifa, our dear friend the U.S. Ambassador to Israel David Friedman, National Security Advisor of Israel Meir Ben-Shabbat, and my chief of staff Asher Hayoun.

Just two months ago we made history in Washington.  We signed the seminal Abraham Accords.  I want to thank President Trump, Secretary Pompeo, and the President’s able peace team, led by Jared Kushner, for their leadership and vision in advancing this historic peace.  Three peace agreements in six weeks.  I don’t think it gets much better than that.

I was going to say, “Like Israel, Bahrain has natural gas,” but I’m not extending this analogy beyond its limits.  But Bahrain has natural gas and oil, but it doesn’t depend on these resources alone.  It has a robust and modern economy with a thriving e-commerce and fintech, cutting-edge aluminum production, cutting-edge tourism, and much more.  And today what we’re doing in this visit is expanding the “much more,” because what we’re doing is to enable the free flow of ideas, innovators, entrepreneurs between Israel and Bahrain, both directions.  And we are unleashing a tremendously potent economic force and a force for peace for the benefit of both our peoples.

And we’re not doing this in the distant future.  We’re doing it right now as we speak, and it’s happening with astonishing speed.  Israelis are flying to Bahrain.  Bahrainis are flying to Israel.  The sky is no longer the limit.  Foreign Minister Al Zayani, please convey to King Hamad my heartfelt admiration for his visionary and courageous leadership.  In 2019, His Majesty hosted a regional economic summit that brought together Bahrainis, Israelis, Americans, representatives from across the Middle East and beyond.  And I think that meeting, which was pooh-poohed at the time, was actually a harbinger of good things to come.  It was a tremendously important step on our common path to reconciliation and peace.  Today, King Hamad and I are building a bridge of peace that many others will cross in the future.

Secretary Pompeo, Mike, I thank you again for your unwavering friendship.  I don’t say that as lip service.  Unwavering friendship, constant at all times.  And I ask you to convey to President Trump my deep appreciation and the appreciation of our grateful nation for all he and his administration have done for the State of Israel and for peace.  Israel and Bahrain have had many contacts over the years, but very frankly, this day would not have happened, these Abraham Accords would not have been signed, without President Trump’s crucial support and leadership.

I welcome all our honored guests from the Kingdom of Bahrain and from the United States, and I thank you for being with us here on this special occasion as we take another historic step on the road to a broader peace.  Welcome, all.

Mr. Prime Minister, thank you not only for hosting us here today, but for leading your nation’s commitment to harmony and cooperation and peace with all of the neighbors in the region.

Foreign Minister Al Zayani, thank you too for being here.  It’s great to see you again, and thank you for Bahrain’s courageous commitment to a brighter future for your people, and the people of the region.

Until then, there had only been two agreements through which Israel normalized relationships with its neighbors, and now the United States has helped achieve three in little more than two months.  We’re hopeful there will be many more to follow.

These agreements are important for so many reasons important to the whole world.  Indeed, as I travel the world, countries that you might not expect are thankful for the work that Bahrain, and the United Emirates, and Israel are now going to do together.

These agreements open up wonderful opportunities for commerce and economic development.  Today I saw a beautiful Gulf Air commercial aircraft sitting out at the airport when I landed.  They also tell – these agreements also tell malign actors like the Islamic Republic of Iran that their influence in the region is waning and that they are ever more isolated, and this shall forever be until they change their direction.

They also advance religious freedom.  Muslims will be able to more easily pray at the al-Aqsa Mosque thanks to the new flights through Abu Dhabi and Manama.  The skies above Sudan, too, are now open to flights from Israel.  And these new agreements also set down a marker – a marker for the future of the Middle East.  The Abraham Accords declare a common vision for “peace, security, and prosperity in the Middle East and [all] around the world.”

Today, these new agreements Israel and Bahrain are making and that we will execute are making new strides in fulfilling that vision.  They round out these central commitments.  You are proving wrong those who say that vision can’t come to life.  You’re transforming great dreams into real action, bold action.  And the United States welcomes the exchange of letters that will enable the opening of embassies in each respective country – a truly historic step for building warm and fruitful diplomatic ties.

We’re pleased, too, that Israelis will now be part of Bahrain’s E-visa system, a truly remarkable achievement in normalizing relationships and easing travel between the two nations.

All of these accomplishments are a great credit to the dedication of your diplomatic teams, who I know have worked tirelessly.  I’m similarly proud of how our State Department team has worked hard to support the Abraham Accords as well.

Prime Minister Netanyahu, Minister Al Zayani, thank you for taking steps towards greater unity and peace and a wonderful opportunity between all the nations of the world.  Thank you and bless you both.

FOREIGN MINISTER AL ZAYANI:  Thank you, sir.  Mr. Prime Minister Netanyahu, Secretary Pompeo, good afternoon and thank you, Secretary, for joining us given all your busy schedule, and thank you for your support.

Ladies and gentlemen, good evening.  It is my pleasure to make this historic first visit to Israel by a minister of foreign affairs of the Kingdom of Bahrain.  And I want to start by expressing my sincere thanks for the warm welcome and generous hospitality extended to me.  In particular, Mr. Prime Minister, the invitation to deliver these remarks at your official residence is a message of trust that is greatly appreciated and well received.

Today, I have been greatly encouraged by my meetings with President Rivlin and Foreign Minister Ashkenazi, and I am looking forward to meeting later with Prime Minister Netanyahu as well as the trilateral with the foreign minister and United States Secretary of State Pompeo.

As during last month’s visit to Bahrain by National Security Advisor Ben Shabat and U.S. Treasury Secretary Mnuchin, discussions continue to be productive, forward-looking, and held in a positive and constructive atmosphere.  We definitely have something to work with, and I am optimistic for the future.

During my meeting with President Rivlin, I conveyed the greetings of His Majesty King Hamad and the people of Bahrain to the president and people of Israel, looking forward to overcoming and rebuilding from the current COVID-19 pandemic, and underlining our readiness to cooperate on healthcare and post-pandemic recovery.  With Prime Minister Netanyahu and Secretary Pompeo, I will be discussing how we can achieve the objective of the Abraham Accords in practical terms and underlining Bahrain’s appreciation for the United States role in delivering them.

I am thankful also for the condolences I received from the president and from the Foreign Minister Ashkenazi following the passing of His Royal Highness Prince Khalifa bin Salman Al Khalifa and for their very kind words on the late prime minister’s life and achievements.

Ladies and gentlemen, throughout all the meetings, it has been obvious the intention and keenness of all sides to ensure that the peace we are pursuing will be a warm peace that will deliver clear benefits to our peoples.  We intend to focus on areas including trade, investment, entrepreneurship, tourism, banking, health, education, communication, technology and innovation, to name just a few.

We look forward to the commencement of air services between Bahrain and Israel from the start of 2020.  We will see up to – up to 14 weekly flights from Bahrain to Tel Aviv, and we’ll add flights to Eilat and Haifa and up to five weekly cargo flights.  To kickstart this process, I am happy to announce that commencing from the 1st of December, the e-Visa system will be implemented in both Bahrain and Israel to allow for our citizens to travel freely between the two countries.

In addition, we will soon witness the reciprocal opening of the two countries’ embassies.  It is through such foundational context that we begin to nurture and build the networks of investment, business, tourism, culture, and so much more that can further solidify and add value to our joint efforts.  I am therefore confident that this emerging cooperation between Bahrain and Israel will pave the way to a dawn of peace for the entire Middle East.

To this end, I continue to emphasize in all my meetings that in order to achieve and consolidate such a peace, the Palestinian-Israeli conflict needs to be resolved.  I therefore call for both parties to get around the negotiating table to achieve a viable two-state solution as is also sought by the international community.

Ladies and gentlemen, in just two months we have made considerable progress and we are already demonstrating the wisdom of His Majesty King Hamad’s vision of reaching out to achieve a more stable region based on peace, dialogue, and understanding.  Equally, we are demonstrating what is possible, outlining a positive goal, and bringing a new sense of optimism for the future of the Middle East.

I am very much looking forward to building on this historic progress, and I am convinced that we have an opportunity to build cooperation, tolerance, co-existence, and trust, not only between our two nations but between all children of Abraham.  In doing so, let us deliver a peace which ensure a safe, stable, and prosperous Middle East for all its peoples.  Our region deserves no less.  Thank you.

PRIME MINISTER NETANYAHU:  Thank you.  And I would be remiss if I wouldn’t mention our condolences, my condolences for the late prime minister.  I did, obviously, send you —

PRIME MINISTER NETANYAHU:  — a letter and published a note.  But he was a great friend, a great champion of peace, and he will be sorely missed.  And I take the opportunity also to offer my hopes for success and continued cooperation with the new prime minister, which I think reflects our great friendship.

On the question of embassies, we’re ready to help.  As far as I know, there’s one or two vacant embassies that are available.  Thank you.  Thank you very much.  Thank you, Mike.

PRIME MINISTER NETANYAHU:  This is a wonderful day for peace.  Thank you.