Secretary of Defense Ashton Carter visited Israel this week, his first visit since becoming Secretary in February of this year. During the trip, Secretary Carter met with Prime Minister Netanyahu and Minister of Defense Yaalon, took part in an Honor Guard ceremony at the Ministry of Defense, received a briefing at Hussein Outlook in northern Israel, and toured Yad Vashem. Secretary Carter noted, in meeting with Minister Yaalon, that “Israel is the bedrock of American strategy in the Middle East.” 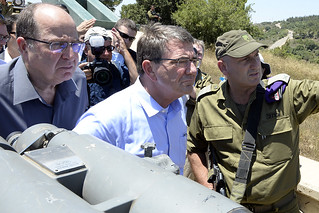