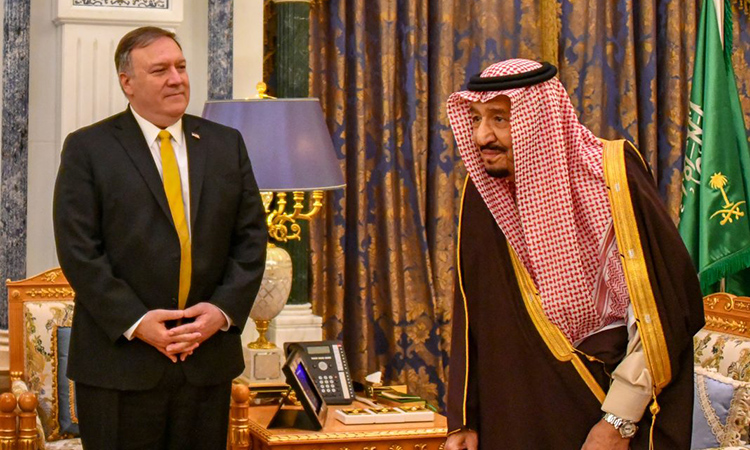 Secretary of State Mike Pompeo, on a week-long visit to nine countries across the Middle East, is reiterating America’s commitment to the region and galvanizing U.S. partners and allies to counter the Iranian regime’s destructive activities.

Secretary of State Mike Pompeo met with Saudi King Salman bin Abdulaziz Al Saud (above) and separately with Crown Prince Mohammed bin Salman on January 14 in Riyadh to discuss the two countries’ close ties and the Trump administration’s efforts to create peace and stability in the Middle East. “A comprehensive political solution is the only way to end the Yemen conflict,” Pompeo said afterwards. They also discussed the killing of journalist Jamal Khashoggi. Pompeo reiterated the U.S. expectation that all involved be held accountable.

Upon his arrival in the kingdom on January 13, Pompeo discussed with Minister of State for Foreign Affairs Adel al-Jubeir a full range of critical issues, including Iran, Syria, Yemen, Lebanon, Libya and Afghanistan.

This story will be updated during the January 8-15 trip to nine nations. He goes next to Oman. The Secretary will return to the United States after Oman. A planned final stop in Kuwait was postponed so that the Pompeo family can attend a family funeral.

Secretary of State Mike Pompeo met several Qatar leaders January 13, including Deputy Prime Minister and Qatari Minister of Foreign Affairs Mohammed bin Abdulrahman bin Jassim Al Thani (above). The leaders took part in the second U.S.-Qatar Strategic Dialogue and later signed new defense, educational and cultural agreements, including expansion of the U.S. presence at Al Udeid Air Base, the primary staging area for coalition efforts to wipe out ISIS. “We are grateful for your country’s willingness to make sure that the airbase can meet the needs of the U.S. military for decades to come,” Pompeo said.

The secretary thanked the Crown Prince and the foreign minister for the UAE’s strong partnership with the United States and discussed ways to expand bilateral ties, including trade and investment.

Gratitude for partnership with Bahrain

Secretary of State Mike Pompeo discussed critical priorities with the leaders of Bahrain on January 11 including counterterrorism, the conflict in Yemen and Iran’s dangerous activities.

They discussed realizing the Middle East Strategic Alliance anchored by a united Gulf Cooperation Council (GCC). Bahrain is the first of the six GCC countries Pompeo is visiting.

Visiting places of worship in Egypt

Secretary of State Mike Pompeo visited both Cathedral of the Nativity of Christ for Egypt’s Coptic Orthodox Church and the Al-Fattah Al-Alim mosque in the heart of Egypt’s new administrative capital.

Speaking in Egypt: U.S. is ‘a force for good in the Middle East’

Secretary of State Mike Pompeo affirmed America’s commitment to its partners in the Middle East and urged them to take on more responsibilities for eradicating radical Islamic terrorism and countering Iran’s malign activities.

In a major address at the century-old American University in Cairo on January 10, Pompeo said the Trump administration’s approach is strengthening those partnerships.

He said the United States has always been “a force for good in the Middle East.”

“Our aim is to partner with our friends and vigorously oppose our enemies, because a strong, secure, and economically vibrant Middle East is in our national interest and it’s in yours as well,” he said.

While the United States will bring home troops from Syria, “this isn’t a change of mission,” he said. “We remain committed to the complete dismantling of the ISIS threat and the ongoing fight against radical Islamist terror … We are looking to our partners to do more going forward.”

“We ask every peace-loving nation of the Middle East to shoulder new responsibilities for defeating Islamic extremism wherever we find it,” he said.

He cautioned that, “The nations of the Middle East will never enjoy security, achieve economic stability or advance the dreams of their people if Iran’s revolutionary regime persists on its current course.”

Secretary Pompeo made an unannounced visit to Baghdad on January 9 to confer with Prime Minister Adel Abdul-Mahdi (above) and other Iraqi leaders. Pompeo expressed support for the new government’s efforts to deliver stability, security and prosperity to all Iraqis and emphasized the continued U.S. commitment to work with Iraqi Security Forces to ensure ISIS’ lasting defeat throughout the region.

Pompeo, stopping first in Amman, Jordan, on January 8, met with King Abdullah II bin al-Hussein and applauded his leadership. “Your nation plays a critical role in regional security and stability, including through its efforts to peacefully resolve the Syrian conflict, fight the spread of radical Islamic terrorism, and countering the Iranian regime’s malign activities,” Pompeo said. He also met with Jordanian Foreign Minister Ayman Safadi (above).