Home الصفحة الرئيسية / News & Events / THE SORROW AND THE GLORY, THE BITTER AND THE SWEET 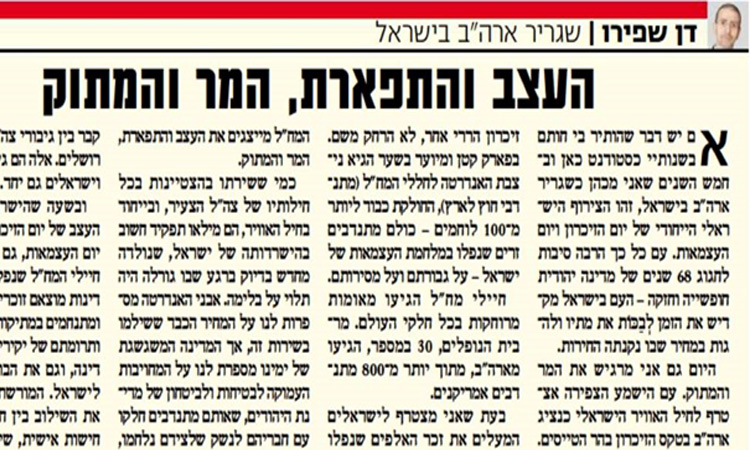 This op-ed was published May 11, 2016, in Yisrael Hayom, by U.S. Ambassador to Israel Dan Shapiro.

From my years here as a student, and the past five years serving as U.S. ambassador, the uniquely Israeli Memorial Day-Independence Day combination has left its mark.

With so much to celebrate — 68 years of the Jewish state, free and strong—Israelis first take the time to mourn their losses and contemplate the price of that freedom.

Today, I will also experience the bitter and the sweet. As the siren sounds, I will join the Israeli Air Force, representing the United States at the memorial ceremony at Pilots’ Mountain National Park in Jerusalem.

There, the loved ones of pilots downed in wars that took place decades ago, and those who fell in more recent battles, all fighting for Israel’s security and freedom, will mourn together, enveloped by the embrace of their air force family. Attending this event is a sobering honor, which I consider one of my most sacred duties—to join our Israeli allies in their time of mourning.

Later in the day, I plan to drive to another hillside memorial not far away.

In a small, wooded park at Shaar Hagai stands the MACHAL Memorial (“Mitnadvei Hutz LaAretz” – “Overseas Volunteers”), where over a hundred fighters—all foreign volunteers who fell in Israel’s 1948 War of Independence—are honored for their bravery and dedication.

Machal soldiers arrived from nations far and wide. The largest number who fell, 30, came from the United States, out of more than 800 Americans who volunteered.

As I join Israelis reflecting on the thousands who fell in defense of this country and its values, including so many victims of terrorism, and on my own country’s unshakable alliance with Israel, I feel drawn to this place to reflect further on our common battles, which have produced shared losses and shared victories.

The memorial sits where “sorrow and glory live together” as poet Haim Gouri wrote in his iconic poem, “Bab el-Wad.” And the Machal fighters themselves, like these two so different days, represent the sorrow and the glory, the bitter and the sweet.

Serving with distinction in all branches of the young Israel Defense Forces, and especially in the air force, they played an instrumental role in the reborn Israel’s survival at precisely the moment when its fate hung in the balance. The stones of the memorial speak to us of the high price they paid in doing so.

But the flourishing country that exists today tells us of the deep commitment to the safety and security of the Jewish state they shared with the comrades they fought beside, which together they bequeathed to subsequent generations and which has enabled Israel to thrive.

One can draw a straight line from Col. David “Mickey” Marcus, who fell in the War of Independence and is buried at the U.S. military cemetery at West Point and Lou Lenart, “the Man Who Saved Tel Aviv”” in that same war, and who we lost this past year, to Sgt. Max Steinberg, who fell in Operation Protective Edge in 2014 and is buried among the heroes of the IDF on Mount Herzl in Jerusalem.

These are American and Israeli heroes.

Just as Israelis experience the sorrow of Memorial Day and the glory of Independence Day, may the families of the fallen Machal soldiers and their fellow citizens, while remembering the bitterness of their loss, take comfort in the sweetness of the knowledge that their lives and their service have strengthened this country and also the bond between America and Israel.

Their legacies are a reminder that individual lives and personal resolve form the core of what has become an unprecedented and intricate alliance between nations.

This Memorial Day and Independence Day, as I reflect on the legendary contributions of Machal, I do so with the firm knowledge that our common values remain our most effective weapon in our struggles against enemies near and far, and our greatest strength in building the societies we can proudly pass on to future generations.

Today we grieve. Tomorrow we celebrate.

Dan Shapiro is the United States ambassador to Israel.