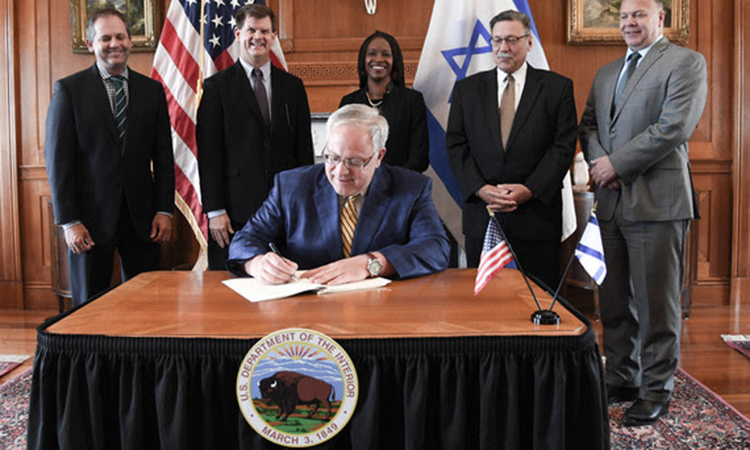 WASHINGTON – Today, U.S. Secretary of the Interior David L. Bernhardt finalized a Memorandum of Understanding (MOU) with Israeli authorities to support future cooperation and exchanges on biodiversity conservation, protected areas and the protection of cultural and historical heritage. Signed by Secretary Bernhardt and Israel Nature and Parks Authority (INPA) Director General Shaul Goldstein, the MOU creates a framework for both agencies to work together on mutual challenges, such as combating wildlife trafficking, protecting ecosystems and managing parks and cultural sites. The MOU reinforces the strong, long-standing relationship between the United States and Israel.

“President Trump values the partnership the United States has with Israel and our collective efforts to strengthen conservation initiatives internationally,” said Secretary Bernhardt. “I applaud Director General Goldstein’s leadership in expanding Israel’s system of parks and nature reserves, and I look forward to strengthening our collaboration with the Israel Nature and Parks Authority.”

“The Israel Nature and Parks Authority is in charge of over 25 percent of Israel’s land, and we have the important and sacred task to protect and conserve not only thousands of species of wild animals and plants, but also many of the most precious and valuable heritage and nature sites in the Holy Land,” said INPA Director General Shaul Goldstein. “There is obviously quite a difference between our two countries in size, but both the U.S. Department of the Interior and the Israel Nature and Parks Authority share the same vision of conservation and protection of our nature, heritage and landscapes for future generations. I look forward to continued cooperation with the U.S. Department of the Interior to fulfill this vision.”

Purpose of the MOU

The MOU creates a framework for exchange of information, best practices and personnel, joint studies and exercises and coordination in international forums to mutually strengthen the Department of the Interior’s (Department) and INPA’s responses to shared challenges, including:

The Department and Israeli authorities have collaborated since 2003 on issues such as public land management, offshore oil and gas operations, water resource management, dam safety and desalination. In 2004, the Department and Israel’s Ministry of National Infrastructure, Energy and Water Resources entered a cooperative agreement for scientific and technical exchange. In 2017, INPA reached out to the Department to explore expanding bilateral cooperation on conservation of natural resources, protected areas and cultural heritage, resulting in the MOU signed today.