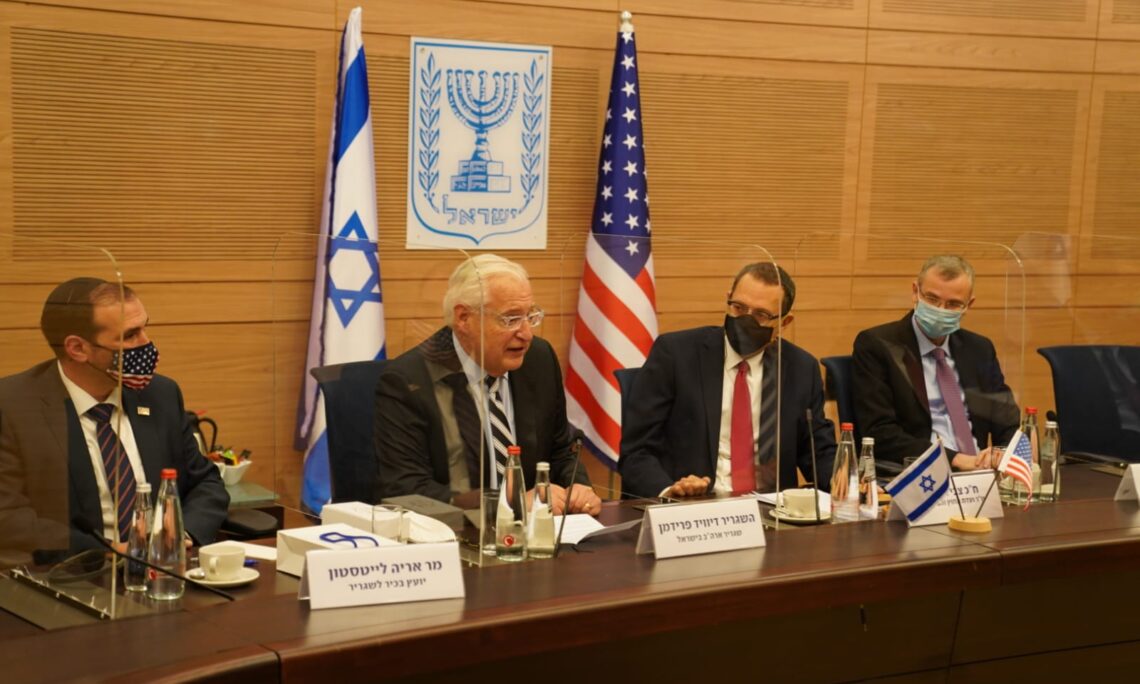 Today, U.S. Ambassador to Israel David M. Friedman visited the Knesset at the invitation of the Subcommittee for Policy and Strategy of the Foreign Affairs and Defense Committee.  During the closed-door meeting, Ambassador Friedman and committee members discussed the deep and enduring ties between the United States and Israel and shared regional security concerns. Here are Ambassador Friedman’s remarks at the open part of the session:

“Well, first of all, to both of you, Speaker Yariv Levin and Chairman Zvi Hauser, two of many who I consider dear friends. I have gotten to know both of you so well for the past several years, and all the people I see here, so many friends, that I’ve been able to meet and  enjoy their company and develop deep relations of trust with so many of them. And so I’m deeply moved to be here. And you’ll forgive me   if my words don’t serve me because of the deep emotions that I feel to be here in front of all of you now.

“Your words were really deeply moving. And I hope I get the video because I don’t think anybody could believe that anyway without proof. So hopefully I can get a copy of the film. I really want to thank all of you. I want to thank all the members of the Knesset for working with me and all your American counterparts over the last four years. And of course, for many years prior to that.

“I’m leaving my post in nine days and it’s flown by. I can’t believe it’s been almost four years since I’ve had this post. It’s been more than four years since I was nominated and as they say in Tehilim (Psalms), elef shanim ke’ayin, a thousand years go by like a flash. I would say here, four years went by like a flash, it just went by so quickly. And I think that’s a testament to how exciting, riveting and also enjoyable the job was. It went very fast. You’re enjoying what you’re doing and you’re busy, and time flies and it sure did.

“So I’ll just I’ll say a couple of things about the past four years. We’ve had an extraordinary relationship, all of us, from the President of the United States with the prime minister, to the cabinet secretaries, secretaries of the United States, and their counterparts, the ministers in the cabinet here, to all the military and intelligence personnel who don’t appear in public, but who I’ve had the privilege of sitting with. But what an experience to sit in a room with the leaders of the Israeli Defense Forces and the American armed forces and see the relationship, the deep respect that you have for each other.

“I know many of you have served in the positions of national security now or in the past, know just how extraordinary the relationship is at the professional level, among the security personnel to just the people of our two countries. We have such great mutual respect, admiration and really affection for each other. And I think everybody here and everybody in both countries worked so hard to advance our mutual interests of freedom, of justice, of democracy and also of faith.

“I think we succeeded in strengthening the U.S. Israel relationship. We succeeded together and making it stronger than ever before, making our nations more secure, more peaceful and more prosperous. And people, as my friends put down the list of some of the accomplishments, whether it was recognising the capital of Israel Jerusalem, to sovereignty over the Golan Heights, to the non-illegality, if you will, of communities in Yehuda Veshomron, or the all the other accomplishments, what was the most important thing?

“And, you know, I’ve been struggling because I asked that question so often. Was what was the most important thing? And I have now the benefit of  four years of perspective, I do think the most important thing that we did was what we did early on, was recognizing Jerusalem as the capital of Israel. I think that it set the right theme for our presidency. I think it strengthened the president, not just here.

“And I think I’m probably paraphrasing something that Jared Kushner said a couple of weeks ago when he was here. What everybody thought,  in the aftermath of the recognition of Jerusalem, that there would be an explosion. And they were right. But it was an explosion of peace, was not an explosion of violence. I think that everything that, from that moment forward, I think we have set the right track for our relationship with each other and our leadership in the entire world.

“And I believe that the Abraham Accords beginning with the Emirates and Bahrain and then Sudan and Kosovo and Morocco, people don’t mention Kosovo, but it’s also another Muslim country. So it’s, what, five, five nations? I think all of that  is a function in large respect of other nations seeing the relationship that the United States had with Israel, seeing how the United States could be trusted to be a partner. And they also wanted to be partners with the United States.

“And they saw that the road to that partnership went through Israel. And we made that clear as well, that we want to be partners with our Arab friends, but we want it to be done in the context of no longer having covert discussions behind the scenes. We want there to be a full open friendship between Israel and its neighbors in the region. And I think all of that began with the with the recognition of Jerusalem. I think ultimately the message that I think rang loud and clear from the Middle East is that Israel is not the problem in the Middle East.

“Israel is now a solution in the Middle East, Israel as a solution to the problems that plague the Middle East. And we see that in so many ways. It’s not just in security, of course, but security is a large part of it. But it’s technology. It’s commerce. And of course, in connection with a once in a century pandemic, we share our best thinking with the best scientists in Israel and elsewhere.

“And we have that level of collaboration as well. Thank God we’re now seeing a light at the end of a very dark tunnel. So serving my country, serving the United States as its ambassador to Israel has been the honor of my life. And it’s an honor made far more meaningful by the many, many friendships that I have made with so many new Israeli government, including all of the people here.  I would say to you, as one who was born and raised in the diaspora, the son of a rabbi, I can tell you that the future of the Jewish people is in your hands.

“Israel is responsible at this point for the future of the Jewish people and the future of Judaism. You know, if you look back and think about it. And I’d like to think about some stark numbers. There were 18 million Jews in 1941. There were 12 million Jews in 1945. Now there are only about 15 million Jews. So we’ve not recovered from the Holocaust. But at the same time, the State of Israel had about 600,000 Jews in 1948. Now it has almost seven million. So the entirety, if you will, of the growth of the Jewish world has been here in the State of Israel. And that trend shows no signs of change. You have the responsibilities in your hands to protect the Jewish people and to protect Judaism. And I know you’re up to the challenge, but it is a very sobering challenge. And I know that something that you and everyone here will meet. So I will conclude with with the words that the Prophet Samuel said to King Saul in the aftermath of the debacle with King Agog, he said: Netzah Yisrael lo yeshaker.  And I pray that the strength of Israel will always endure. Thank you very much.”