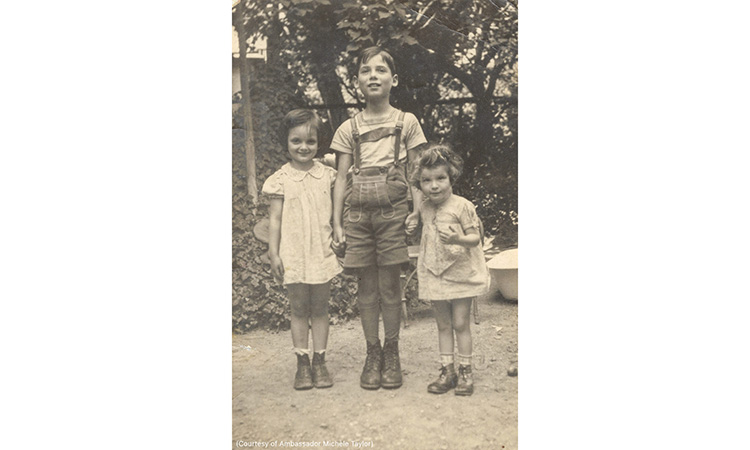 Holocaust Remembrance Day, on April 28, honors the 6 million Jews and millions of other victims killed by the Nazis and their collaborators during the Holocaust. It also pays tribute to the survivors and their descendants who keep their legacies alive through public service.

Ambassador Michèle Taylor, the daughter and granddaughter of Holocaust survivors, began her term as the U.S. permanent representative to the United Nations Human Rights Council in Geneva in February. In that role, she shines a light on human rights abuses around the world and fights against bigotry.

Taylor’s family knows bigotry firsthand. She said that on Kristallnacht in November 1938 in Vienna, the Nazis came looking for her grandfather. “Thankfully, my family had been warned and he was hidden and escaped certain death, though my grandmother was threatened that they would come back looking for him until he was found,” she said.

But there was violence, and from that night forward, Taylor said, her mother, then 3 years old, was terrorized by memories of a family member being shot in front of her. Taylor’s understanding is that her grandmother eventually joined her grandfather in hiding and her mother was taken elsewhere for safety. “But, like many other families, I will likely never know the brave people who hid them or how they were eventually able to get visas and emigrate to the United States,” she said. Taylor’s mother’s paternal grandparents were murdered by the Nazis in Riga.

Understandably affected by the trauma, neither her grandparents nor her mother talked about their own experiences other than a few scattered details. Taylor said she only heard stories from them of what had happened to her extended family.

“My grandparents were good, kind people who gave a lot to their communities, but they were also palpably sad and profoundly cautious (I called my grandfather ‘Grandpa-be-careful’). I can see from old photos that they had once been happy and adventurous people. Devastatingly, my mother was fundamentally broken and never really able to properly care for me or for herself.”

When Taylor was 12 years old and living in the San Francisco Bay Area, an openly gay San Francisco politician named Harvey Milk was killed. The resulting unrest highlighted the discrimination against the gay community in San Francisco. “I understood that the stereotyping of any group of people was no different than what had happened to my family, and I knew where it could lead,” she said.

At that time, Taylor made a personal vow to do what she could to fight against hatred and bigotry. Her work has taken many forms, including championing women in STEM education, combating violence against women, and addressing modern genocide and atrocity prevention, antisemitism and Holocaust denial through the U.S. Holocaust Memorial Museum.

“The ability to combine my love of people, desire for public service, and unrelenting commitment to Tikkun Olam [the Jewish mandate to repair the world] as the U.S. ambassador to the Human Rights Council feels like the true stewardship of my family’s legacy.”

Other State Department employees likewise have chosen public service as a fitting tribute to relatives who were Holocaust survivors or victims and recently shared their experiences.

Secretary of State Antony Blinken, the stepson of a Holocaust survivor, has said that his stepfather’s “story made a deep impression on me. It taught me that evil on a grand scale can and does happen in our world — and that we have a responsibility to do everything we can to stop it.”

Ellen Germain serves as the U.S. special envoy for Holocaust issues, with a mission to return assets lost during the period to their rightful owners, secure compensation for Nazi crimes and ensure the Holocaust is remembered.

“It is so important to tell the exact story and tell it to the younger generations who have no personal connection to World War II, the Holocaust, and often have no chance of meeting a survivor,” Germain said.