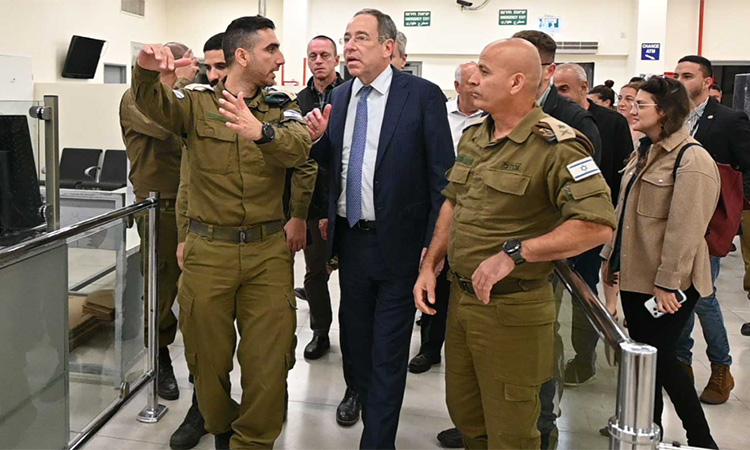 U.S. Ambassador to Israel Tom Nides visited the Allenby Border Crossing on the Israeli-Jordanian border late last night (November 8, 2022), to receive an update on the pilot program to open the checkpoint to passenger traffic 24-hours a day. This service enhancement was a commitment made by the Israeli government when President Biden visited in July 2022.

Ambassador Nides was accompanied by U.S. Security Coordinator to Israel and the Palestinians, Gen. Michael Fenzel, and by the Chief of the Office of Palestinian Affairs, George Noll. On the Israeli side, he was accompanied by the Coordinator of Government Activities in the Territories, Maj.-Gen. Ghassan Alayan, Deputy Director General of the Israeli Airports Authority (IAA) Hagai Zamir, and other senior officers.

During the visit, he spoke to IAA staff who are operating the border crossing and heard from them about the plan to extend the pilot and permanently open the crossing for passenger traffic 24 hours a day, to meet Israel’s commitment to U.S. President Joe Biden. The current pilot which began at 8:00 on November 6 will run until 15:30 on November 11, 2022.

“I am delighted to be here at Allenby bridge, in the middle of the night, to witness this crossing being open 24 hours a day,” said Ambassador Nides. “I want to thank the Director General of the Airports Authority for making this possible. The opportunity for travelers to cross whenever they need to is good for Israelis and good for Palestinians. Trade and freedom of movement are the keys to peace. We hope this pilot is just the start – we look forward to working with the Israeli authorities on the next phase.”

Ambassador Nides thanked the IAA for taking the first steps toward this challenging goal and added that he would also like to see future efforts to ease and expand cargo shipping operations.