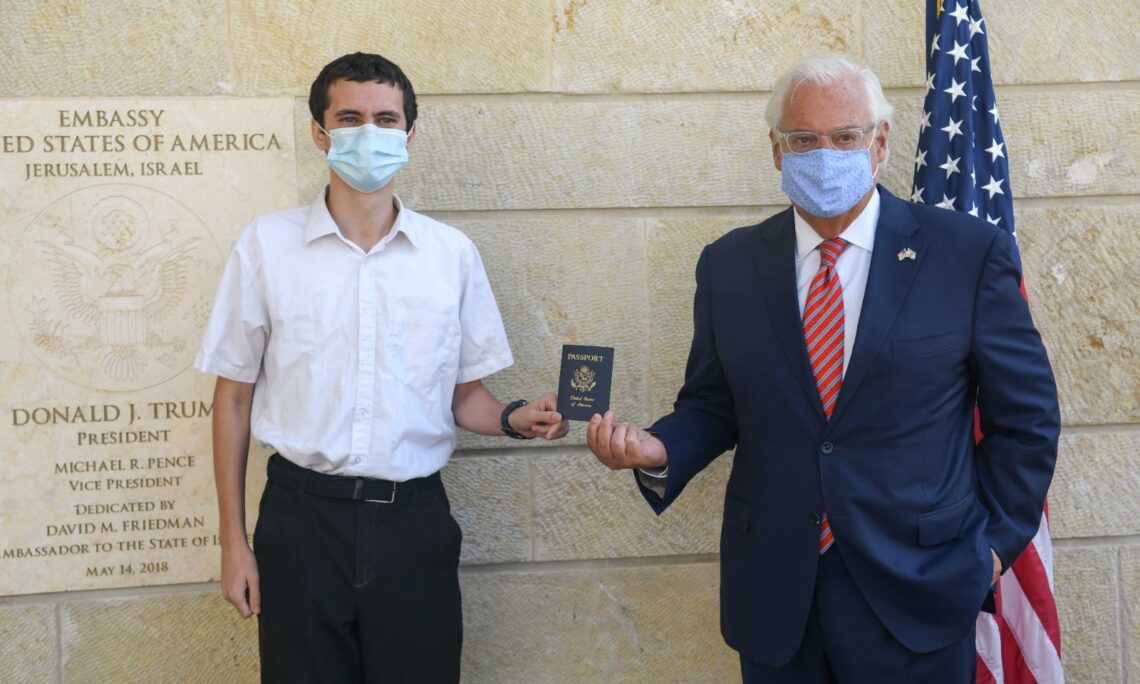 Following the State Department’s announcement October 29, 2020, announcing that the Department will now allow U.S. citizens born in Jerusalem to elect to list their place of birth as either “Israel” or “Jerusalem,” the first passport exemplifying the new regulation was issued today [Friday, October 30, 2020] at the U.S. Embassy in Jerusalem. The passport was issued to Menachem ZIVOTOFSKY, the subject of two Supreme Court cases on this issue, and lists his place of birth as “Israel.”

“Menachem Zivotofsky, it is my honor to present you with the very first passport issued to an American citizen born in Jerusalem with ‘Israel’ designated as the place of birth,” said U.S. Ambassador to Israel David Friedman.

Ambassador Friedman added: “I would like to thank Secretary Michael Pompeo for his leadership. It’s no secret that under prior stewardship the State Department would not alter the passport designation even after Jerusalem was recognized as Israel’s capital. Secretary Pompeo cut through that bureaucracy and brought our passport policy in line with our foreign policy and common sense.”

“Finally, I would like to thank President Donald Trump who set this course in motion. In moving our Embassy to Jerusalem, President Trump kept a sacred promise and reinforced our commitment to stand with our friends and to never flinch in the face of groundless opposition or threats. Our stature as a nation has been greatly enhanced by President Trump’s courage and determination.”

U.S. citizens holding currently-valid passports listing Jerusalem as place of birth are not required to obtain a new passport at this time, and should travel on those passports.  U.S. citizens wishing to change their place of birth from Jerusalem to Israel are encouraged to do so when renewing their U.S. passport within a year of its expiration date.