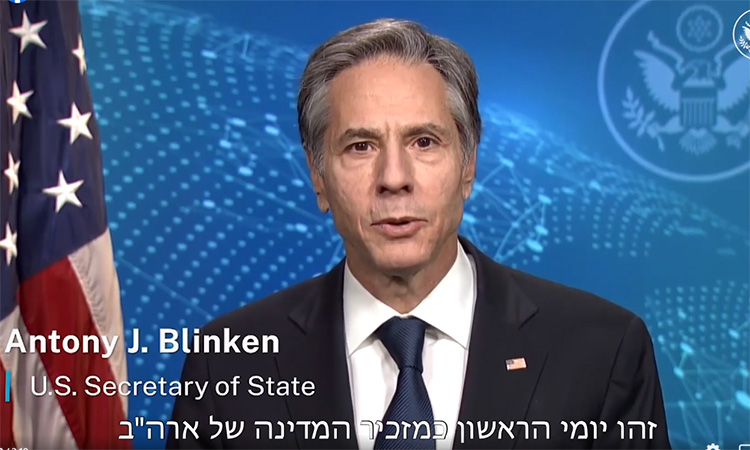 Today is my first day as U.S. Secretary of State. And recording this message is one of the first things I’m doing. Because Holocaust Remembrance Day matters a great deal.

It matters to me personally, as the stepson of a Holocaust survivor. My stepfather was just a boy when he lost his entire family to the Nazis. He spent nearly four years in labor and death camps before he managed to escape – and was later rescued by American troops. The story made a deep impression on me. It taught me that evil on a grand scale can and does happen in our world – and that we have a responsibility to do everything we can to stop it.

Those lessons are as vital now as they’ve ever been – maybe more so. It’s no accident that people who seek to create instability and undermine democracy often try to cast doubt on the Holocaust. They want to blur the line between truth and lies. They want to use disinformation and conspiracy theories to gain power. And they want to provoke hate – against Jewish people, and more broadly against refugees and asylum-seekers, people of color, LGBTQ people – anyone who has been targeted for violence and dehumanized because of who they are.

That’s why it’s so important that we speak the truth about the past, to protect the facts when others try to distort or trivialize Holocaust crimes, and to seek justice for the survivors and their families.

Every day that I serve as Secretary of State, I will carry the memory of my stepfather and his family, and the 6 million Jewish people and millions of others who were killed during the Holocaust. I will remember that a nation’s power isn’t measured only by the size of its military or economy, but by the moral choices it makes. And I will remember that atrocities like the Holocaust don’t just happen. They are allowed to happen. It’s up to us to stop them. Never again.

Secretary of State Antony J. Blinken delivered these recorded remarks on January 27, 2021 for a virtual International Holocaust Remembrance Day event co-hosted by the Israeli Ministry of Foreign Affairs and the Social Equality Ministry.