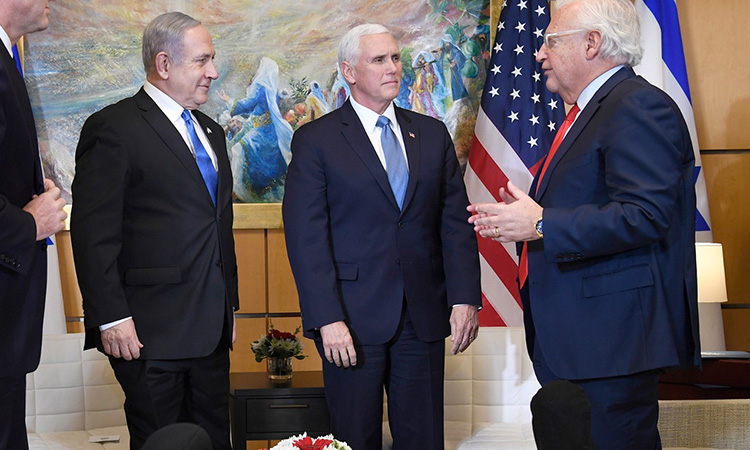 VICE PRESIDENT PENCE:  Well, thank you all for being here, and it is my great privilege to be on my second visit to Israel as Vice President of the United States.  But to have the honor to welcome Prime Minister Netanyahu to the American Embassy here in Jerusalem, the capital of the State of Israel, is a particular privilege for me.  And, Mr. Prime Minister, welcome.

PRIME MINISTER NETANYAHU:  Thank you, Mr. Vice President.  What an honor for us.  Thank you.

VICE PRESIDENT PENCE:  Well, we just completed a conversation about regional issues earlier today.  I want to congratulate the Prime Minister and President Rivlin for an extraordinary commemoration of the 75th anniversary of the liberation of Auschwitz.

To have 49 nations represented here, standing in solidarity with all of those that were killed in the Holocaust, with the survivors; and to speak with one voice, “Never again”; and to make a clarion condemnation of anti-Semitism was truly inspiring.

And, Mr. Prime Minister, I want to congratulate you on bringing so many nations of the world together around that anniversary, but also around that renewed — that renewed call for leadership to apply the lessons that were learned in those dark days.

Let me also say, we just completed a conversation about plans for next week.  President Trump asked me to extend an invitation to Prime Minister Netanyahu to come to the White House next week to discuss regional issues, as well as the prospect of peace here in the Holy Land.

And, Mr. Prime Minister, I’m grateful that you accepted the invitation, and we look very much forward to welcome you to our nation’s capital to contin- — continue discussions about a broad range of issues of mutual concern between the United States and Israel, but also about the prospect of peace.

So, thank you very much.

PRIME MINISTER NETANYHU:  Thank you.  Mr. Vice President, first let me say that you spoke exceptionally movingly today, both in the substance and the depth of feeling that you conveyed.  And it was in a universal expression of a firm, bold stance to translate memory into action.  And you are translating into action — President Trump and you — by standing against the worst manifestation of anti-Semitism, and that is the call of Iran to wipe out the 6 million and more Jews of Israel.

You spoke about it clearly today, and you act clearly every day.  So I want to — I want to express my congratulations to you for coming here, for what you said, and for what you and what President Trump and your administration is doing every single day on behalf of Israel’s security.

So I gladly accept your invitation — his invitation to come to Washington, and discuss, with him, his ideas on how to advance peace, and to work closely with him to advance that goal.

I suggested that Benny Gantz be invited to this event as well because I think that it’s important that we do not lose this historic opportunity.  With such friends in the White House, with such backing from the United States, we should get as broad a consensus as possible around the efforts to achieve security and peace, peace and security for the State of Israel.

I look forward to doing both, and I thank you again for your extraordinary friendship.  Thank you.

AMBASSADOR DERMER:  Can I —

AMBASSADOR DERMER:  Yeah, thank you.  If I could just stand for one second.  Mr. Vice President, Mr. Prime Minister, if I — if you could stand.  Together with President Trump, no three people have done more to cause this historic move of the United States Embassy from Tel Aviv to Jerusalem than the two of you and President Trump.

PRIME MINISTER NETANYAHU:  And you.

The flags are presented.)

Suggested for You
Tweets by @VP