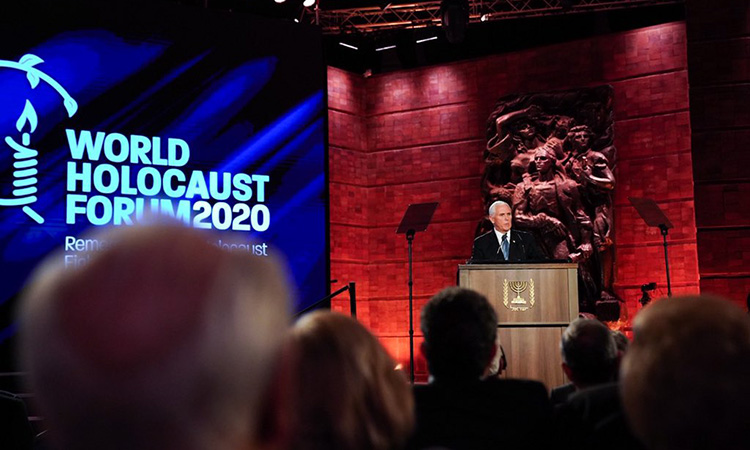 VICE PRESIDENT PENCE:  President Rivlin, Prime Minister Netanyahu, Your Majesties, Presidents, Excellencies, honored survivors and distinguished guests: It is deeply humbling for me to stand before you today, on behalf of the American people, as we mark the 75th anniversary of the liberation of Auschwitz.

On this occasion, here on Mount Herzl, we gather to fulfill a solemn obligation — an obligation of remembrance: to never allow the memory of those who died in the Holocaust to be forgotten by anyone, anywhere in the world.

The word “remember” appears no fewer than 169 times in the Hebrew Bible — for memory is the constant obligation of all generations.

And today we pause to remember what President Donald Trump rightly called the “dark stain on human history” — the greatest evil ever perpetuated by man against man in the long catalogue of human crime.

Today we remember what happens when the powerless cry for help and the powerful refuse to answer.

The town’s name was Oświęcim.  As part of their plan to destroy the very existence of Polish culture, the Nazis gave Polish towns German names.  And this one they called Auschwitz.

When soldiers opened the gates of Auschwitz on January 27, 1945, they found 7,000 half-starved, half-naked prisoners, hundreds of boxes of camp records that documented the greatest mass murder in history.  Before the war was over, in its five years of existence, more than 1.1 million men, women, and children would perish at Auschwitz.

As my wife and I can attest firsthand, from this past year, one cannot walk the grounds of Auschwitz without being overcome with emotion and grief.  One cannot see the piles of shoes, the gas chambers, the crematoriums, the lone boxcar facing the gate to the camp, and those grainy photographs of men, women, and children being sent to their deaths without asking: “How could they?”

Today we also pay tribute to those who survived, who all these years have borne witness to that evil and have served mankind by their example.  (Applause.)

And today we honor and remember the memory of all the Allied forces, including more than 2 million American soldiers, who left hearth and home, suffered appalling casualties, and freed a continent from the grip of tyranny.

And, finally, we pay tribute to the memory of those non-Jewish heroes who saved countless lives — those the people of Israel call the “righteous among the nations.”

In an age of indifference, they acted.  In an age of fear, they showed courage.  And their memory and their example should kindle anew the flame of our hearts to do the same in our time.  (Applause.)

And, finally, we must have the courage to recognize all the leaders and all the nations that are gathered here that, today, we have the responsibility and the power to ensure that what we remember here today can never happen again.  (Applause.)

Mr. Prime Minister, as we honor and remember the 6 million Jewish martyrs of the Holocaust, the world can only marvel at the faith and resilience of the Jewish people, who just three years after walking in the valley of the shadow of death, rose up from the ashes to reclaim a Jewish future and rebuild the Jewish State.  (Applause.)

And I’m proud to say, as Vice President of the United States, that the American people have been with you every step of the way since 1948.  (Applause.)  And so we will remain.

As President Trump declared in his historic visit to Jerusalem, the bond between our two peoples is “woven together in the fabric of our hearts.”  And so it shall always be.  (Applause.)

Today we remember not simply the liberation of Auschwitz but also the triumph of freedom — a promise fulfilled, a people restored to their rightful place among the nations of the Earth.  And we remember — we remember the long night of that past, the survivors and the faces of those we lost, the heroes who stood against those evil times.  And today we gather nearly 50 nations strong, here in Jerusalem, to say with one voice: Never again.  (Applause.)

Through pogroms, persecutions, and expulsions in the ghettos, and finally, even through the death camps, the Jewish people clung to an ancient promise that He would “never leave you or forsake you” and that he would leave this people to inherit the land that he swore to your ancestors that he would give them.

May the memory of the martyrs be enshrined in the hearts of all humanity for all time.

May God bless the Jewish people, the State of Israel, the United States, and all the nations gathered here.

And may He who creates peace in the heavens create peace for us and for all the world.

Suggested for You
Tweets by @VP