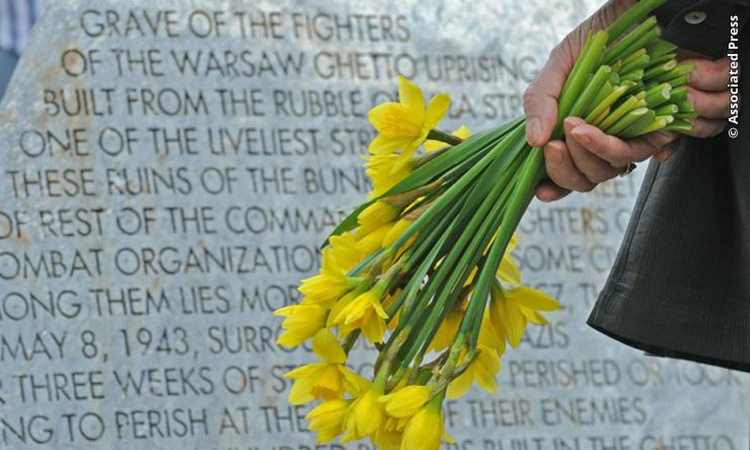 On Yom HaShoah, we join people across the nation as well as around the world in marking the 75th anniversary of the Warsaw Ghetto uprising, a Jewish revolt against the Nazis that began on April 19, 1943 and lasted until May 16, 1943.

This year, to honor the strength and bravery of the Holocaust’s victims, survivors, and heroes, the U.S. Department of State’s annual Department Yom HaShoah program honors the late Mrs. Irena Sendler, a Polish citizen who defied the Nazis and risked her life to save thousands of victims — including an estimated 2,500 Jewish children – by smuggling them out of the Warsaw Ghetto. The program also highlights the testimony of Zygmunt Rolat, a Polish Jewish citizen who survived the Holocaust, immigrated to America, and became a founding donor of the Museum of the History of Polish Jews, built on the site of the Warsaw Ghetto.

Absent action, the sacred pledge of “Never again” can become empty rhetoric. When we reject anti-Semitism by word and deed  — when we take a stand against intolerance and demand respect for the inherent dignity and human rights of every person — we give renewed meaning to “Never again.”

Heroism is the only way to confront the tragedy of the Holocaust and the disasters caused by religious, ethnic and racialintolerance and other forms of hatred which continue to afflict us today, violating the human rights of individuals persecuted worldwide. The heroes and heroines of the Holocaust exemplify the courage and bravery we need today to overcome threats to human rights and tolerance everywhere.

The Holocaust was history’s most extreme and violent manifestation of anti-Semitism. Between 1933 and 1945, the Nazi regime and its collaborators systematically murdered millions of Jews. Today, we remember the six million Jews systematically murdered by the Nazis and their collaborators as well as millions of Slavs, Roma, LGBTI and disabled people, priests and religious leaders, and others who courageously opposed their brutal regime. Today, we honor the strength and bravery of the victims, survivors, and heroes in the face of overwhelming adversity.

We are honored that Holocaust survivors and heroes continue to inspire us with their first-hand experiences. They strengthen our steadfastness to combat antisemitism and all forms of hatred.

About the Author: Thomas K. Yazdgerdi serves as the Special Envoy for Holocaust Issues and Samuel D. Brownback serves as Ambassador at Large for International Religious Freedom, both at the U.S. Department of State.

Editor’s Note: This entry also appears in the U.S. Department of State’s publication on Medium.com.